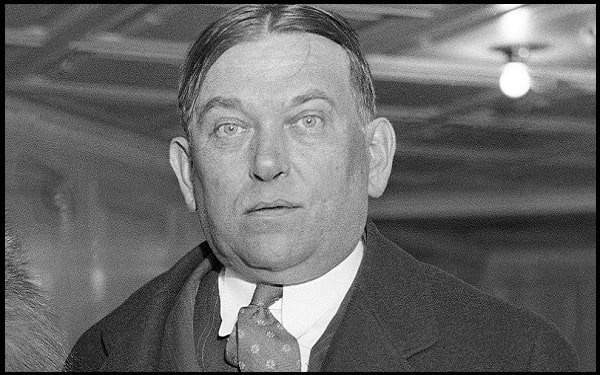 “The basic fact about human existence is not that it is a tragedy, but that it is a bore. It is not so much a war as an endless standing in line.”-HL Mencken 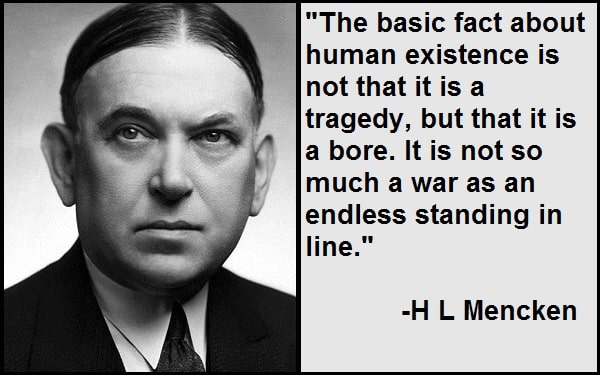 “Strike an average between what a woman thinks of her husband a month before she marries him and what she thinks of him a year afterward, and you will have the truth about him.”-HL Mencken

“Bachelors know more about women than married men; if they didn’t they’d be married too.”-HL Mencken

“A man may be a fool and not know it, but not if he is married.”-HL Mencken

“Men have a much better time of it than women. For one thing, they marry later; for another thing, they die earlier.”-HL Mencken

“No married man is genuinely happy if he has to drink worse whiskey than he used to drink when he was single.”-HL Mencken

“It is now quite lawful for a Catholic woman to avoid pregnancy by a resort to mathematics, though she is still forbidden to resort to physics or chemistry.”-HL Mencken

“An idealist is one who, on noticing that roses smell better than a cabbage, concludes that it will also make better soup.”-HL Mencken

“Every normal man must be tempted, at times, to spit on his hands, hoist the black flag, and begin slitting throats.”-HL Mencken

“Faith may be defined briefly as an illogical belief in the occurrence of the improbable.”-HL Mencken

“Puritanism. The haunting fear that someone, somewhere, maybe happy.”-HL Mencken

“Theology is the effort to explain the unknowable in terms of the not worth knowing.”-HL Mencken

“Democracy is also a form of worship. It is the worship of Jackals by Jackasses.”-HL Mencken

“Opera in English is, in the main, just about as sensible as baseball in Italian.”-HL Mencken

“Democracy is a pathetic belief in the collective wisdom of individual ignorance.”-HL Mencken

“I never smoked a cigarette until I was nine.”-HL Mencken

“For every complex problem, there is an answer that is clear, simple, and wrong.”-HL Mencken

“When a new source of taxation is found it never means, in practice, that the old source is abandoned. It merely means that the politicians have two ways of milking the taxpayer where they had one before.”-HL Mencken

“As the arteries grow hard, the heart grows soft.”-HL Mencken

“A society made up of individuals who were all capable of original thought would probably be unendurable.”-HL Mencken

“The chief value of money lies in the fact that one lives in a world in which it is overestimated.”-HL Mencken

“No one in this world, so far as I know – and I have searched the records for years, and employed agents to help me – has ever lost money by underestimating the intelligence of the great masses of the plain people.”-HL Mencken

“If a politician found he had cannibals among his constituents, he would promise them missionaries for dinner.”-HL Mencken

“A national political campaign is better than the best circus ever heard of, with a mass baptism and a couple of hangings thrown in.”-HL Mencken

“Each party steals so many articles of faith from the other, and the candidates spend so much time making each other’s speeches, that by the time election day is past there is nothing much to do save turn the sitting rascals out and let a new gang in.”-HL Mencken

“A judge is a law student who marks his own examination papers.”-HL Mencken

“All men are frauds. The only difference between them is that some admit it. I myself deny it.”-HL Mencken

“Democracy is only a dream: it should be put in the same category as Arcadia, Santa Claus, and Heaven.”-HL Mencken

“Don’t overestimate the decency of the human race.”-HL Mencken

“I believe that all government is evil, and that trying to improve it is largely a waste of time.”-HL Mencken

“I never lecture, not because I am shy or a bad speaker, but simply because I detest the sort of people who go to lectures and don’t want to meet them.”-HL Mencken

“It is even harder for the average ape to believe that he has descended from man.”-HL Mencken

“The urge to save humanity is almost always a false front for the urge to rule.”-HL Mencken

“To be in love is merely to be in a state of perceptual anesthesia – to mistake an ordinary young woman for a goddess.”-HL Mencken

“War will never cease until babies begin to come into the world with larger cerebrums and smaller adrenal glands.”-HL Mencken

“A man always remembers his first love with special tenderness, but after that, he begins to bunch them.”-HL Mencken

“The only cure for contempt is counter-contempt.”-HL Mencken

“I go on working for the same reason that a hen goes on laying eggs.”-HL Mencken

“Adultery is the application of democracy to love.”-HL Mencken

“A prohibitionist is the sort of man one couldn’t care to drink with, even if he drank.”-HL Mencken

“Alimony – the ransom that the happy pay to the devil.”-HL Mencken

“A church is a place in which gentlemen who have never been to heaven brag about it to persons who will never get there.”-HL Mencken

“I believe in only one thing: liberty; but I do not believe in liberty enough to want to force it upon anyone.”-HL Mencken

“For it is mutual trust, even more than mutual interest that holds human associations together. Our friends seldom profit from us but they make us feel safe. Marriage is a scheme to accomplish exactly that same end.”-HL Mencken

“Self-respect: the secure feeling that no one, as yet, is suspicious.”-HL Mencken

“Man weeps to think that he will die so soon; woman, that she was born so long ago.”-HL Mencken

“Morality is the theory that every human act must be either right or wrong, and that 99 % of them are wrong.”-HL Mencken

“The difference between a moral man and a man of honor is that the latter regrets a discreditable act, even when it has worked and he has not been caught.”-HL Mencken

“Women have simple tastes. They get pleasure out of the conversation of children in arms and men in love.”-HL Mencken

“A good politician is quite as unthinkable as an honest burglar.”-HL Mencken

“One may no more live in the world without picking up the moral prejudices of the world than one will be able to go to hell without perspiring.”-HL Mencken

“Temptation is a woman’s weapon and man’s excuse.”-HL Mencken

“Giving every man a vote has no more made men wise and free than Christianity has made them good.”-HL Mencken

“No matter how long he lives, no man ever becomes as wise as the average woman of forty-eight.”-HL Mencken

“Every election is a sort of advance auction sale of stolen goods.”-HL Mencken

“Whenever a husband and wife begin to discuss their marriage they are giving evidence at a coroner’s inquest.”-HL Mencken

“What men value in this world is not rights but privileges.”-HL Mencken

“The worst government is often the most moral. One composed of cynics is often very tolerant and humane. But when fanatics are on top there is no limit to oppression.”-HL Mencken

“Every man is his own hell.”-HL Mencken

“A bad man is a sort who weeps every time he speaks of a good woman.”-HL Mencken

“Every man sees in his relatives, and especially in his cousins, a series of grotesque caricatures of himself.”-HL Mencken

“I confess I enjoy democracy immensely. It is incomparably idiotic, and hence incomparably amusing.”-HL Mencken

“The most dangerous man to any government is the man who is able to think things out… without regard to the prevailing superstitions and taboos. Almost inevitably he comes to the conclusion that the government he lives under is dishonest, insane, intolerable.”-HL Mencken