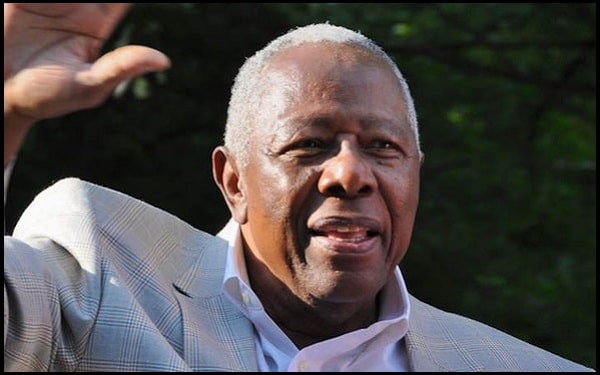 “I never doubted my ability, but when you hear all your life you’re inferior, it makes you wonder if the other guys have something you’ve never seen before. If they do, I’m still looking for it.”-Hank Aaron 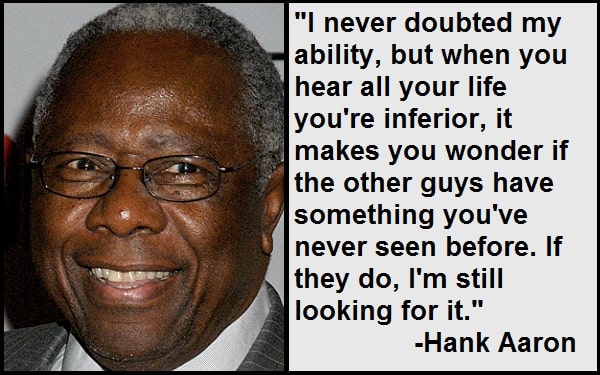 “My motto was always to keep swinging. Whether I was in a slump or feeling badly or having trouble off the field, the only thing to do was keep swinging.”-Hank Aaron

“The triple is the most exciting play in baseball. Home runs win a lot of games, but I never understood why fans are so obsessed with them.”-Hank Aaron

“I don’t see pitches down the middle anymore – not even in batting practice.”-Hank Aaron

“Failure is a part of success.”-Hank Aaron

“I looked for the same pitch my whole career, a breaking ball. All of the time. I never worried about the fastball. They couldn’t throw it past me, none of them.”-Hank Aaron

“I’m hoping someday that some kid, black or white, will hit more home runs than myself. Whoever it is, I’d be pulling for him.”-Hank Aaron

“On the field, blacks have been able to be supergiants. But, once our playing days are over, this is the end of it and we go back to the back of the bus again.”-Hank Aaron

“You can only milk a cow so long, then you’re left holding the pail.”-Hank Aaron

“Guessing what the pitcher is going to throw is 80% of being a successful hitter. The other 20% is just execution.”-Hank Aaron

“The thing I like about baseball is that it’s one-on-one. You stand up there alone, and if you make a mistake, it’s your mistake. If you hit a home run, it’s your home run.”-Hank Aaron

“The pitcher has got only a ball. I’ve got a bat. So the percentage in weapons is in my favor and I let the fellow with the ball do the fretting.”-Hank Aaron

“I don’t feel right unless I have a sport to play or at least a way to work up a sweat.”-Hank Aaron

“It took me seventeen years to get three thousand hits in baseball. I did it in one afternoon on the golf course.”-Hank Aaron

“I tell young people – including my granddaughter – there is no shortcut in life. You have to take it one step at a time and work hard. And you have to give back.”-Hank Aaron

“I am very proud to be an American. This country has so much potential, I’d just like to see things better, or whatever, and I think it will be.”-Hank Aaron

“I never smile when I have a bat in my hands. That’s when you’ve got to be serious. When I get out on the field, nothing’s a joke to me. I don’t feel like I should walk around with a smile on my face.”-Hank Aaron

“Some people resented the fact I was trying to break a white man’s record.”-Hank Aaron

“People were not ready to accept me as a baseball player. The easiest part of that whole thing, chasing the Babe’s record, was playing the game itself. The hardest thing was after the game was over, dealing with the press. They could never understand.”-Hank Aaron

“Too bad integration didn’t come sooner, because there were so many ballplayers that could have made the major leagues. That’s why, you look back, and – not to take away anything from Babe Ruth or some of those other guys – they didn’t play against the greatest ballplayers in the world.”-Hank Aaron