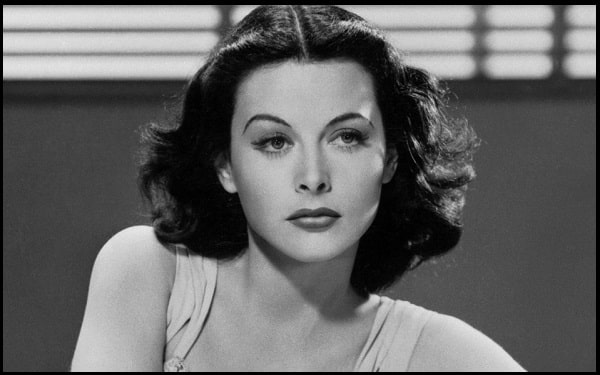 Hedy Lamarr Quotes:- Hedy Lamarr (November 9, 1914 – January 19, 2000) was an Austrian-born American film actress and inventor who was posthumously inducted into the National Inventors Hall of Fame.

“A good painting to me has always been like a friend. It keeps me company, comforts and inspires.”-Hedy Lamarr 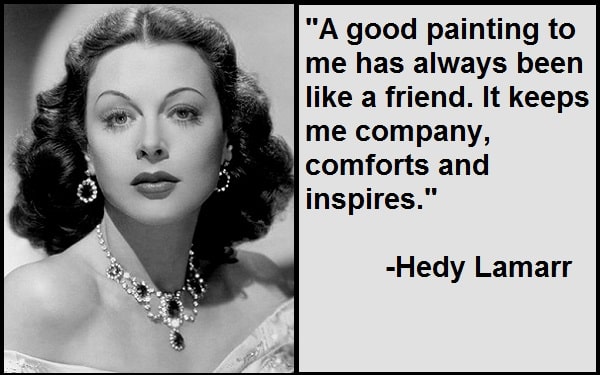 “I can excuse everything but boredom. Boring people don’t have to stay that way.”-Hedy Lamarr

“I must quit marrying men who feel inferior to me. Somewhere there must be a man who could be my husband and not feel inferior.”-Hedy Lamarr

“I know why most people never get rich. They put the money ahead of the job. If you just think of the job, the money will automatically follow. This never fails.”-Hedy Lamarr

“One of my favorite people is Gypsy Rose Lee. She bears out the Biblical promise that he has got. And I hope she gets a lot more.”-Hedy Lamarr

“Because you don’t live near a bakery doesn’t mean you have to go without cheesecake.”-Hedy Lamarr

“I’m a sworn enemy of convention. I despise the conventional in anything, even the arts.”-Hedy Lamarr

“American men, as a group, seem to be interested in only two things, money, and breasts. It seems a very narrow outlook.”-Hedy Lamarr

“I remember all too well the premiere of Ecstasy when I watched my bare bottom bounce across the screen and my mother and father sat there in shock.”-Hedy Lamarr

“Lawyers know how to take isolated complaints in a divorce case and build them into one big one.”-Hedy Lamarr

Hedy Lamarr Quotes To Inspire you

“I would tell anyone who wants something from someone else to feign not wanting it. People are perverse. If you show great affection to them, they’ll run the other way.”-Hedy Lamarr

“I find very often that very ugly women have really handsome men and vice versa because they don’t have any competition. Sometimes handsome men have avoided me.”-Hedy Lamarr

“I know when I’m working I seldom get into trouble. My educated guess is that boredom has caused most of the problems with Hollywood celebrities.”-Hedy Lamarr

“Many people are the target people. Once when Louis B. Mayer insulted me I poured a glass of water over his head.”-Hedy Lamarr

“My mother always called me an ugly weed, so I never was aware of anything until I was older. Plain girls should have someone telling them they are beautiful. Sometimes this works miracles.”-Hedy Lamarr

“Jack Kennedy always said to me, Hedy, get involved. That’s the secret of life. Try everything. Join everything. Meet everybody.”-Hedy Lamarr

“I never go to funerals. To me, a person is dead when he breathes for the last time. After that, your memories should be personal.”-Hedy Lamarr

“Confidence is something you’re born with. I know I had loads of it even at the age of 15.”-Hedy Lamarr

“I’ve met the most interesting people while flying or on a boat. These methods of travel seem to attract the kind of people I want to be with.”-Hedy Lamarr

“Any girl can be glamorous. All you have to do is stand still and look stupid.”-Hedy Lamarr

“I have not been that wise. Health I have taken for granted. The love I have demanded, perhaps too much and too often. As for money, I have only realized its true worth when I didn’t have it.”-Hedy Lamarr

“Experts always know everything but the fine points. When I took my citizenship exams, no one there knew how the White House came to be called the White House.”-Hedy Lamarr

“I’d rather wear jewels in my hair than anywhere else. The face should have the advantage of this brilliance.”-Hedy Lamarr

“If I were to name my favorite pastime, I’d have to say talking about myself. I love it and I think most other people do too. We need people like us, more listeners and fewer talkers.”-Hedy Lamarr

“Let any pretty girl announce a divorce in Hollywood and the wolves come running. Fresh meat for the beast and they are always hungry.”-Hedy Lamarr

“When I attained a certain advanced intimacy with a man, and I don’t just mean sex, I married him.”-Hedy Lamarr

“Dates with actors, finally, just seemed to me evenings of shop talk. I got sick of it after a while. So the more famous I became, the more I narrowed down my choices.”-Hedy Lamarr

“I think women are concerned too much with their clothes. Men don’t really care that much about women’s clothes. If they like a girl, chances are they’ll like her clothes.”-Hedy Lamarr

“I was in constant demand, in my professional life and my personal life.”-Hedy Lamarr

“If I had my way everyone would have a psychiatrist. When the brain is sick and you must throw up, you do it by being purged in a psychiatrist’s office.”-Hedy Lamarr

“It is easier for women to succeed in business, the arts, and politics in America than in Europe.”-Hedy Lamarr

“Perhaps my problem in marriage – and it is the problem of many women – was to want both intimacy and independence. It is a difficult line to walk, yet both needs are important to a marriage.”-Hedy Lamarr

“All my six husbands married me for different reasons.”-Hedy Lamarr

“Analysis gave me great freedom of emotions and fantastic confidence. I felt I had served my time as a puppet.”-Hedy Lamarr

“I advise everybody not to save: spend your money. Most people save all their lives and leave it to somebody else. Money is to be enjoyed.”-Hedy Lamarr

“I don’t fear death because I don’t fear anything I don’t understand. When I start to think about it, I order a massage and it goes away.”-Hedy Lamarr

“I was born an only child in Vienna, Austria. My father found hours to sit by me by the library fire and tell fairy stories.”-Hedy Lamarr

“Most children turn out badly because they have the wrong parental image. This doesn’t mean their parents are criminals. It means they are boring and cruel.”-Hedy Lamarr

“The ladder of success in Hollywood is usually a press agent, actor, director, producer, leading man; and you are a star if you sleep with each of them in that order. Crude, but true.”-Hedy Lamarr

“The public pays and feels it is entitled to participate in the personal affairs of a performer.”-Hedy Lamarr

“Dirt makes a man look masculine. Let your hair blow in the wind, and all that. It’s OK. All you have to do is look neat when you have to look neat.”-Hedy Lamarr

“I appreciate subtlety. I have never enjoyed a kiss in front of the camera. There’s nothing to it except not getting your lipstick smeared.”-Hedy Lamarr

“I don’t believe in life after death. But I do believe in some grinding destiny that watches over us on earth. If I didn’t, the safety valve would give and the boiler would explode.”-Hedy Lamarr

“I don’t have any gnawing guilt over contributing to any unhappiness suffered by my husband. They were as much to blame as I was.”-Hedy Lamarr

“I have never seen a wrestling match or a prize fight, and I don’t want to. When I find out a man is interested in these sports, I drop him.”-Hedy Lamarr

“I often talked to Bing Crosby, and while I liked him, I never understood why he was so popular. To me, his voice was just a gimmick.”-Hedy Lamarr

“I’ve been an important star and lived a full life, yet I only have three close friends. I guess that’s all anyone can expect.”-Hedy Lamarr

“Making pictures, for an actress, is like betting, for a gambler. Each time you make a picture you try to analyze why you won or lost.”-Hedy Lamarr

“Men are the most virile and most attractive between the ages of 35 and 55. Under 35 a man has too much to learn, and I don’t have time to teach him.”-Hedy Lamarr

“The ceremony took six minutes. The marriage lasted about the same amount of time though we didn’t get a divorce for almost a year.”-Hedy Lamarr

“I am a very good shot. I have hunted for every kind of animal. But I would never kill an animal during the mating season.”-Hedy Lamarr

“To be a star is to own the world and all the people in it. After a taste of stardom, everything else is poverty.”-Hedy Lamarr