“The quarterback gets plenty of protection in the pocket, and he picks up protection out of the pocket; he’s got protection down the field on his slides.”-Jeff Fisher 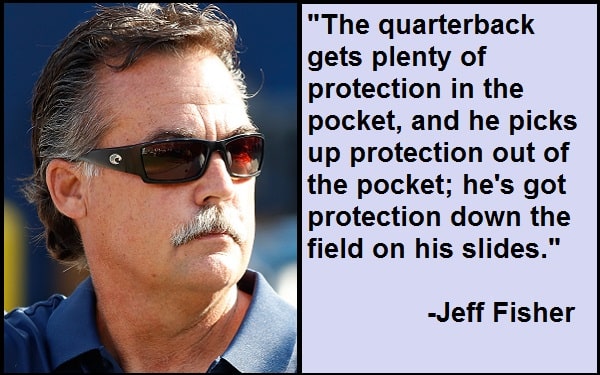 “There was something missing. But in my world, there is never time to figure out what is, in fact, missing.”-Jeff Fisher

“It’s not a born-again thing; it was a peaceful, really, really cool moment where I just felt that I was no longer the dad anymore. I actually had become a son, and it makes things much easier from a day-to-day perspective.”-Jeff Fisher

“One of the more difficult things is time. Either you are going 100 miles an hour, or you are sleeping. There is nothing in between.”-Jeff Fisher

“The nickel spot, inside. It’s the hardest position to play. It’s harder than outside.”-Jeff Fisher

“Typically, there’s about 20, 25 percent turnover every year. So, every three or four years with the exception of, as is the case with the Patriots and the quarterback, you have a roster turnover.”-Jeff Fisher

“I had this moment in church, which I think really turned me off. I was 7 or 8 years old and I was sitting at church, and we happened to be playing with the sunlight that was coming down from the stained glass window, and the monsignor came down to the pew and grabbed us by our neck collars and said, ‘I’ll deal with you.'”-Jeff Fisher

“I’m just really appreciative of the loyal fans in St. Louis who just lost their team. It’s not an easy situation to go through. On the other hand, we have to move forward.”-Jeff Fisher

“Our philosophy here, guys, is we’re going to work as long as we have to to get the work done. I’m not one that wants the coaches to compete to see who can get in the earliest, who stays the latest, who passes themselves on the way into work in the morning.”-Jeff Fisher

“I guess it’s sad that anybody, regardless of profession, that they’re in this country, would take a shot at our military.”-Jeff Fisher

“Since 2000, it’s been a privilege and honor for me to be on the competition committee. And our main focus… is player safety.”-Jeff Fisher

“I think everyone at some point in their career would like the opportunity to go back to their alma mater, but from a timing standpoint, it’s just never worked.”-Jeff Fisher

“The players are out here to help win games and to improve, not to make a movie. They’re not actors. They’re players.”-Jeff Fisher

“I’ll make changes at the receiver before I make a change at the quarterback.”-Jeff Fisher

“Some of the decisions that you make are not permanent.”-Jeff Fisher

“It’s my personal opinion, and I firmly believe, that it’s important that I keep sports and politics separate.”-Jeff Fisher

“Everybody goes through situations like this. A tipped ball, a shoe-string tackle on a third-down scramble by the quarterback where he has 40 yards to run.”-Jeff Fisher

“Every week, as a staff, you put a plan together and put your players in position to make plays.”-Jeff Fisher

“There’s a general feeling if you take the cut block out of the game, then you’re going to significantly impact the run game.”-Jeff Fisher

“Those that coach 10 years that take a year off are three times better coaches… in year 11.”-Jeff Fisher

“There’s a handful of teams that have a revolving door, that are changing coaches every couple of years, and you can look at the success that they’re having. They’re not.”-Jeff Fisher

“There’s going to be different kinds of challenges on a yearly basis. You’re going to have to overcome injuries, or you overcome a playoff loss or what have you. So there are always challenges in this business.”-Jeff Fisher

“We have rules in the rule book that are very specific. If the quarterback is in a throwing position, he gets protection. But in the event that the ball is handed off, at that instant, there’s no telling whether or not he is a runner or not, so he loses that protection.”-Jeff Fisher

“There’s obviously a push to protect the quarterback, but you have to give the defensive players a chance. All of the quarterbacks have to do is pull the ball, and he’s a runner. How’s the defender going to know if the ball is pulled or not?”-Jeff Fisher

“From our perspective, the most important thing is what you do with the players, how you handle them, your ability to communicate with them.”-Jeff Fisher

“You’re moving a franchise. You’re leaving one city and going to another, which is difficult from a fan standpoint, from a fan-base standpoint, but you have to take care of the detail things. As you go through that step-by-step process, from my standpoint, my job is to keep in mind the player’s needs.”-Jeff Fisher

“I learned the most important thing is to put yourself in the shoes of the players.”-Jeff Fisher

“I couldn’t identify just one, but there are numerous rule changes and points of emphasis that have reflected a change in the field almost immediately. It’s hard to avoid the horse-collar tackle, for example, but the players understand why the rule is in there – because of the injury rate prior to us making that a personal foul.”-Jeff Fisher

“Having grown up there, my dad in 1967 took me to the Rams-Eagles game, and I’ve been a Rams fan since I was a kid.”-Jeff Fisher

“A lot of coaches make it harder than it should be. Some are too hard on themselves, obsessing about controlling everything, not trusting their assistants, worrying about time.”-Jeff Fisher