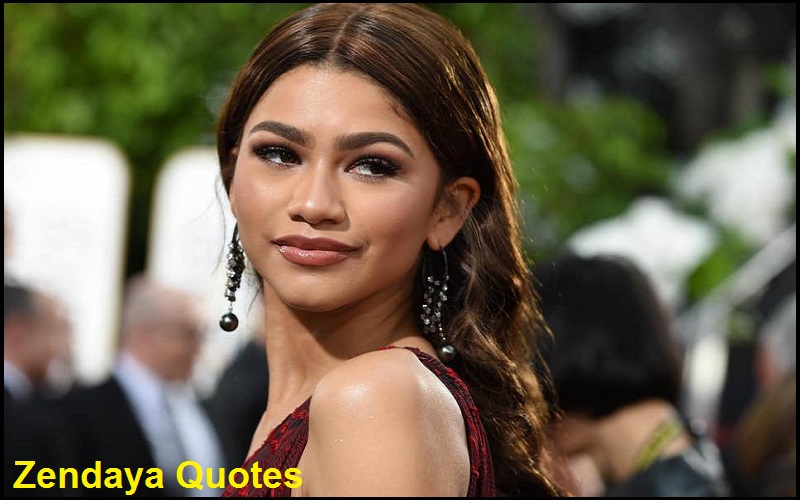 Zendaya Quotes:- Zendaya (born September 1, 1996) is an American actress and singer. She began her career as a child model and backup dancer, before gaining prominence for her role as Rocky Blue on the Disney Channel sitcom Shake It Up. In 2013, Zendaya was a contestant on the sixteenth season of the competition series Dancing with the Stars. 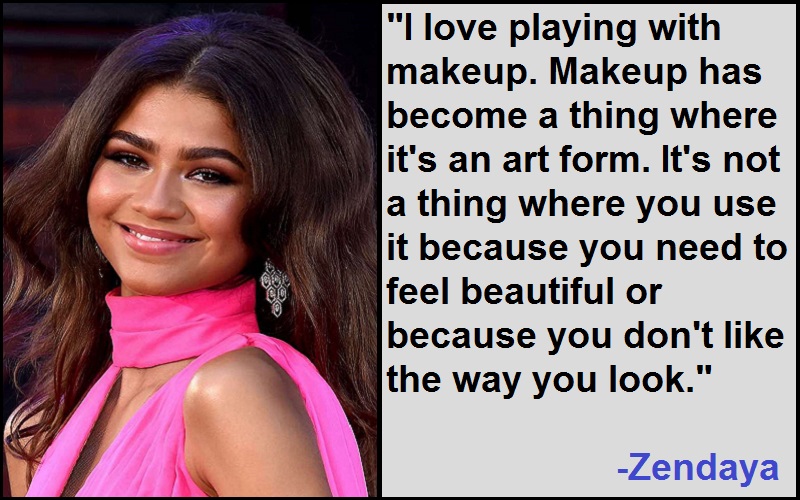 “I was actually supposed to be a basketball player, not an actress. My parents had me playing basketball on competitive teams when I was in kindergarten. Even though my heart belongs to the arts, I’m a tomboy at heart, too.”-Zendaya

“I don’t think people understand the power of social media or our phones.”-Zendaya

“Braids are not new. Black women have been wearing braids for a very long time.”-Zendaya

“I have a phone obsession. It’s really hard on set sometimes because I’ll be checking Instagram, and then I have to remember, ‘Oh, crap, I have to shoot a scene or rehearse.’ Every now and then, I have to turn it off and live my life.”-Zendaya

“Of course, I’ve had a problem with people taking me seriously because of my age. People are always going to do that because you’re less experienced; you haven’t lived as much.”-Zendaya 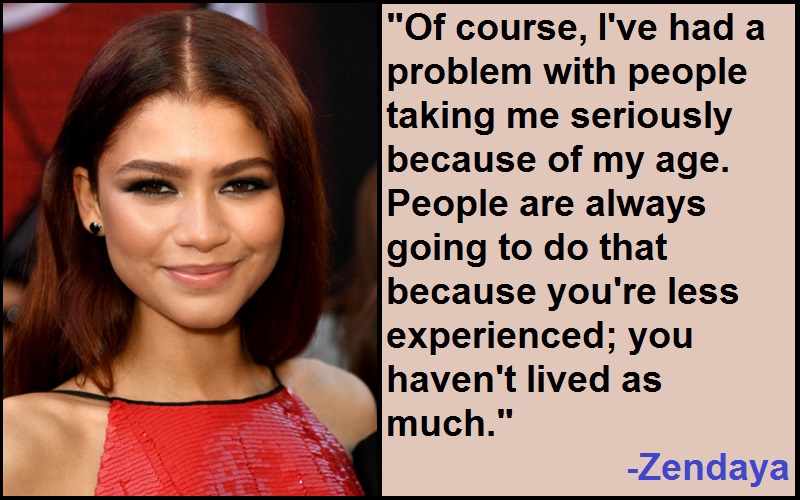 “My first part in a play was one of the witches in ‘Macbeth.'”-Zendaya

“Let’s practice motivation and love, not discrimination and hate.”-“-Zendaya

“There are so many great things in life; why dwell on negativity?”-Zendaya

“Find something that makes you happy and goes for it.”-Zendaya

“I secretly want to shave my head.”-Zendaya

“I want to make affordable shoes of quality that are very fashion-forward, chic, and that I’m going to wear.”-Zendaya

“There is no such thing as ugly.”-Zendaya

“If there’s any definition of being perfect, you’re perfect at being yourself.”-Zendaya

“Why limit yourself? I feel like I can do anything.”-Zendaya

“A feminist is a person who believes in the power of women just as much as they believe in the power of anyone else. It’s equality, it’s fairness, and I think it’s a great thing to be a part of.”-Zendaya

“Fashion is a great thing, it’s a way to express who you are.”-Zendaya

“Sticking with your vision and what you believe in is so, so important.”-Zendaya

“A good hair day is when my curls are popping. Sometimes my curls and waves, they like to go a little wild sometimes. They have a mind of their own. But some days, they just fall right into place.”-Zendaya

“I was born an auntie. I have an older niece and nephew and many younger nieces and nephews.”-Zendaya

“It’s hard as a young person of a different ethnicity or background to look at the TV and not see anyone who looks like you. Representation is very important.”-Zendaya

“Pretty is so boring now. There are so many different definitions of ‘pretty.’ It’s so much broader than before. The old pretty is boring – nobody cares anymore.”-Zendaya

“When you’re put in a position to really affect young people who are going to run the world one day, if you’re able to be in their life at a young age and make a positive impact, I think that’s a beautiful thing.”-Zendaya

“Why trip off some random person in Idaho that doesn’t feel my vibe? Like, no thank you. Stay in your life; I’ll stay in mine.”-Zendaya

“Top knots are the easiest thing to create.”-Zendaya

“I think the way we react to things is a big indicator of our character and what type of person we are.”-Zendaya

“I use my platform as a tool and a way to speak about greater change.”-Zendaya

“Shake It Up’ definitely teaches kids about the importance of reaching for your dreams and setting high goals. It also teaches great lessons about friendship and family.”-Zendaya

“I’ve had a lot of voices tell me what I should be making. Personally, I would much rather live and die by my own hand. If my stuff sucks, then at least I made it suck. I didn’t allow some person, some old dude in a suit, to make it suck for me.”-Zendaya

50+ Unapologetic And Inspiring Quotes From Zendaya

“I talk about Beyonce too much. I am a diehard.”-Zendaya

“I wore a mullet to the Grammys! I have no fear.”-Zendaya

“One of my dreams is to walk down the runway during Fashion Week!”-Zendaya

“Oakland kids are always the best.”-Zendaya

“When I was younger, I went through a phase when I didn’t like my hair. Because the school I went to was primarily Caucasian, there wasn’t anyone who had my hair texture. I remember one day I straightened my hair, and that was the first day that people gave me compliments on it.”-Zendaya

“My generation, we really have to step up to the plate and vote. Tweeting is great – people say, ‘Oh, I don’t want this or that’ – but at the end of the day, tweeting isn’t a ballot. Just saying that you don’t like someone on Twitter is not going to turn a state blue or red. You have to vote.”-Zendaya

“I haven’t always been confident enough to rock different styles because I used to be really shy.”-Zendaya

“I realized that if I don’t like something, I can change it. If I don’t feel comfortable with something, then I have a voice to say it’s not cool.”-Zendaya

“What hasn’t Barbie been? I don’t think I can create an occupation that she has not done yet.”-Zendaya

“I hate when books are written from the wrong perspective; when they’re written by adults for teenagers. Like, do you truly remember what it’s like to be 12? No, not really.”-Zendaya

“I was that weird eight-year-old who was really interested in Shakespeare and understood it and appreciated the language.”-Zendaya

“I remember ‘Hannah Montana’ came out, and I was so depressed, I started crying because I was like, ‘I want to do that.'”-Zendaya

“I’ve always been honest with my fans, and I want to keep that up because I feel they can see through the fakeness.”-Zendaya

“I can’t do chapped lips. If your lips are jacked up, Aquaphor is always a good go-to.”-Zendaya

“I love my fashion, so I gotta have my outfits.”-Zendaya

“I would say that ‘Shake It Up’ was a chance for me to do two things I really love: acting and dancing.”-Zendaya

“My mother’s proud of where she’s from, and her history, and her past, and same with my dad. I have roots in Africa. Like, I am from Africa as well as from Germany, and I am very proud of that.”-Zendaya

“I am so honored to join the company of a roster as celebrated and diverse as Covergirl’s. I can’t wait to share some of my own beauty tips with fans and work alongside Covergirl to continue empowering girls and women to celebrate their individuality.”-Zendaya

“Remember that we are all human beings trying to do what we love to do.”-Zendaya

“Doing and making positive programming for young people is so important to me, and I will keep doing it.”-Zendaya

“To all the parents out there, thank you for allowing me to be a role model for your children. I really, really do not take that for granted.”-Zendaya

“I was taught as a young child by my parents and family to love myself.”-Zendaya

“A lot of people don’t realize that hair is a big thing for a lot of people, not just African-American women. It’s something to be aware of and to be cautious of.”-Zendaya

“All my brothers and my dad at one point had dreadlocks.”-Zendaya

“I’m a little girl; no one wants to beat up on me.”-Zendaya

“My mom started working at the California Shakespeare Theater in Oakland when I was two years old, so I’ve always grown up around theater.”-Zendaya

“I love singing and would love to record an album at some point.”-Zendaya

“Everyone loves Beyonce. If you don’t love Beyonce, we can’t talk.”-Zendaya

“Honestly, I just love great performers and people who love what they do.”-Zendaya

“My older brothers and sisters have kids and families.”-Zendaya

“I love all types of braids. Single, multiple, box braids – I try them all.”-Zendaya

“I’m excited to be a part of the new direction the Barbie brand is headed, specifically how they are celebrating diversity in the line and encouraging kids to raise their voices.”-Zendaya

“When I first started out in the industry, I was 12 or whatever, and I wanted to be on something so bad, and I didn’t know what I was going to be on. At the time, I was in school, and I was working on drama and theatrical stuff, so I never thought that I’d end up going to comedy.”-Zendaya

“I think, more than anything else, my dog’s death has made me grow up. I find myself thinking about the world in a more serious way.”-Zendaya

“As a kid, my main interest was dancing. When I was 8 years old, I was in a hip-hop troupe.”-Zendaya

“My room used to be full of Michael Jackson posters.”-Zendaya

“I’ve loved Michael Jackson since the minute I was born. He’s probably the most talented person ever. He was able to create such an amazing career and be probably the biggest star we’ve ever had.”-Zendaya

“I didn’t like my hair and makeup one time on a photo shoot, and my publicist told me, ‘You should just be happy with it – they haven’t had a black girl on the cover since forever.’ She’s no longer my publicist.”-Zendaya

“The only way I was going to come back to the Disney Channel was if I was in a position of more power.”-Zendaya

“My mom actually taught fifth grade, so… I’m good with fifth graders. That’s, like, my specialty.”-Zendaya

“You’d be surprised how self-conscious a lot of women are. That’s something I’ve witnessed firsthand.”-Zendaya

“There are things that people say that hurt my feelings or whatever, especially with social media right now. It can be the most amazing thing, and it can also be the most negative and detrimental thing.”-Zendaya

“Janelle Monae, she has her own style, and it’s specifically hers.”-Zendaya

“I did kindergarten twice because I was so shy.”-Zendaya

“As you grow older, your music begins to mature and grow older along with you.”-Zendaya

“Some things are really sacred and important to other cultures, so you have to be aware, politically, about those things before you just adopt them.”-Zendaya

“There were a lot of times people would do my makeup, and it would be awful, and I would be orange. Nothing matched. So then you learn how to do your own makeup. I watched a lot of YouTube videos when I was little and taught myself.”-Zendaya

“As an artist, you have to work really, really hard because you gotta make something that will allow people to even take the chance to even listen to it, you know?”-Zendaya

“I definitely enjoy working with people who can do their thing but also allow me to do my thing, you know? Who respect the process.”-Zendaya

“My parents got me in trouble when I was in school because someone was getting bullied, and I didn’t do anything about it. I just watched it happen and then came to the school, and I got cussed out for not helping and not being a part of it.”-Zendaya