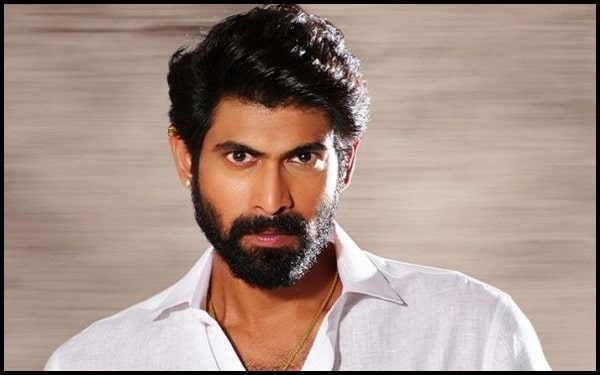 Rana Daggubati Quotes:- Rana Daggubati (born 14 December 1984) is an Indian actor, producer, television personality, visual effects coordinator, and entrepreneur has known primarily for his work in Telugu language films, as well as his works in Hindi and Tamil language films.

“The Hindi film industry makes films for the rest of the world. Tamil films are watched by Malay people. When a film is not bound by a language, why should an actor be?”-Rana Daggubati 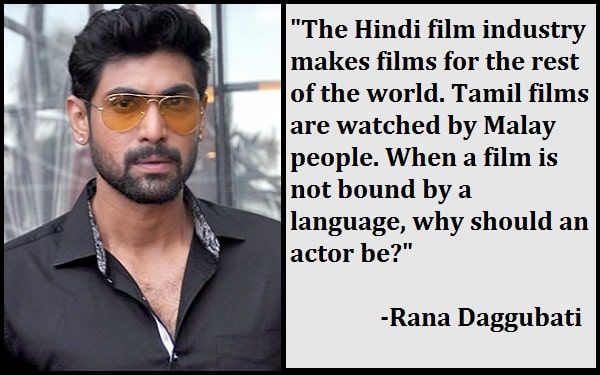 “We see many posters and standees at cinema halls and some catch attention. But these posters are soon forgotten. Taking a picture with the actors, enabled by AR, helps record a memory.”-Rana Daggubati

“While we were shooting ‘Baahubali,’ I had a knee injury, and a few months later, Prabhas injured his shoulder. Those two injuries meant a break of around five months from the schedule. So around that time, I was doing absolutely nothing, and Neeraj Pandey called me with ‘Baby.'”-Rana Daggubati

“If you want to tell a new story, it is a risk. But then you have to do it in the best financial way as possible.”-Rana Daggubati

“Being a person of the armed forces is not easy. Performing it is also not easy. There is a sense of discipline and body language that you need to have throughout.”-Rana Daggubati

“I don’t understand why they keep forks and spoons on the table while serving biryani. You are supposed to eat it with your hand, and I prefer it that way.”-Rana Daggubati

“Food is my big connect to Old City, and I discovered the culture and history of the city by exploring food joints.”-Rana Daggubati

“I have grown fond of the food which is made in Barkas, and I try to go there at least once a week. Some of the food joints don’t even have a proper name, but it’s so different compared to the rest of the places in Hyderabad.”-Rana Daggubati

“My grandfather D. Ramanaidu has been in the film business for over 50 years, so I grew up in films.”-Rana Daggubati

“My family has always believed that anybody can do anything if you are trained for it. So I trained with Barry John’s in Mumbai, did martial arts, and then went to stunt school in the U.S.”-Rana Daggubati

“Whether it is a relationship with family members, girlfriends, friends, or co-workers – every relationship is important. Even a casual acquaintance means something to me.”-Rana Daggubati

“I believe that the mistakes you make in the past are learning experiences and make you grow as a human.”-Rana Daggubati

“What other people think of me is their problem – not mine.”-Rana Daggubati

“Most of the things in your life are not in your control – the family you are born into, the parents, and the siblings you have. It is only friendship and love that you create for yourself in this lifetime.”-Rana Daggubati

“I’ve been a part of cool films without even romancing.”-Rana Daggubati

“We are moving into a phase where what was once alternative cinema is becoming mainstream. I like being in that space.”-Rana Daggubati

“A myth that operated for a year was that my broad structure secretly held a deadly body. I was so weary of my burgeoning tummy that I would conceal it by wearing very loose clothes.”-Rana Daggubati

“As a child, I was into cricket and boxing in school.”-Rana Daggubati

“For evening workouts, I work out two body parts; a big muscle and a small, like, say, the chest and the triceps. I lift crazy weights and take no breaks while I’m at it.”-Rana Daggubati

“Hyderabad can be harsh to a foodie like me. The haleem and the biryanis are in your face. It’s hard to overcome temptations and harder not to binge.”-Rana Daggubati

“I love to be in the entertainment space, and my aim is to create new content and entertain people, whether it’s in movies or on TV.”-Rana Daggubati

“I truly believe that cinema is a collaborative effort, and as long as I get to tell, and be part of, interesting stories and work with genuine people, I don’t see any project as a ‘risk.'”-Rana Daggubati

“Each character, be it the antagonist or the protagonist, brings with himself his own personality… and I have tried to stay true to each one of them; each is enjoyable in their own way!”-Rana Daggubati

“Thanos is undoubtedly the most powerful entity and villain the world has ever seen – he is virtually indestructible. Imagine a villain so menacing that all the Avengers, Guardians of the Galaxy, and their allies have to come together in a hope to defeat this one guy; such characters come to you once in a lifetime!”-Rana Daggubati

“Any skill requires training. I took the corporate approach to act and wanted to develop the necessary skills.”-Rana Daggubati

“‘Leader’ is a political drama. It’s the story of a character who understands what the people want.”-Rana Daggubati

“I want to do films in as many genres – action, fantasy, period, classic love stories – as I can. I don’t want to pigeon-hole myself.”-Rana Daggubati

“When I watch films, I skip songs. I don’t like them.”-Rana Daggubati

“I grew up understanding cinema from early on and was soon cinema-literate.”-Rana Daggubati

“I don’t want to do the song-dance formula; there are many people doing it, right?”-Rana Daggubati

“I enjoy being myself on television, where I am not enacting a character.”-Rana Daggubati

“By logic, it’s a handicap. If I shut one eye, I can’t see from the other eye. But it is one of those things which I don’t think too much about. One needs to have the strength to move forward.”-Rana Daggubati

“I am really happy with the appreciation ‘Baahubali’ is receiving. Its success proves that if you back the right content, it can travel across the country and the globe.”-Rana Daggubati

“‘Baahubali’ team is not after numbers. If we would have been number guys, we would have never made a film with such a huge budget. We just wanted to make the biggest war film of this country, but what it has achieved is amazing.”-Rana Daggubati

“I have grown up reading Marvel Comics and Marvel movies with their intricately woven storylines. It is fascinating to see how Marvel has created characters and stories that resonate so well with audiences across the globe, making movies at a scale that one had never before imagined.”-Rana Daggubati