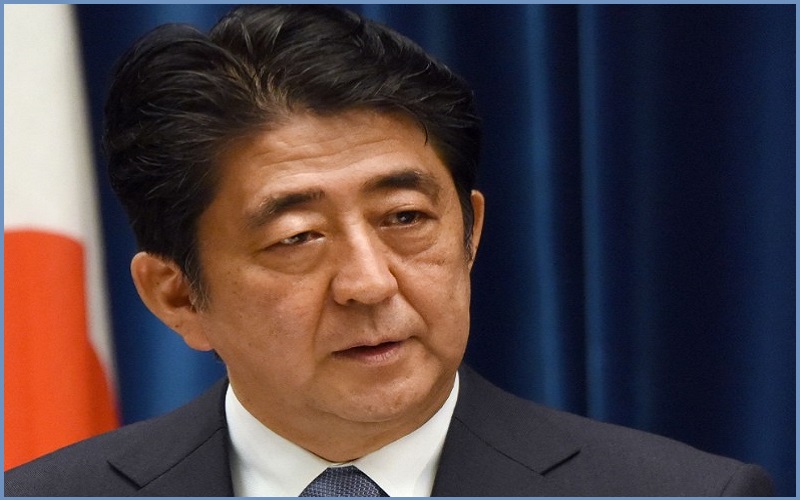 Shinzo Abe Quotes:- Shinzo Abe ( born 21 September 1954) is a Japanese politician serving as Prime Minister of Japan and leader of the Liberal Democratic Party (LDP) since 2012.

“A robust economy is a source of national strength for Japan.”-Shinzo Abe

“Haven’t we put off problems without clarifying Japan’s will to protect the lives and assets of its people and territory with its own hands, and merely accepted the benefits of economic prosperity?”-Shinzo Abe 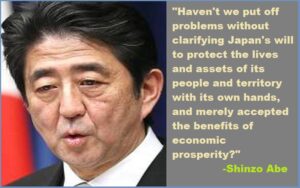 “Human security recognizes the importance of individuals and that the key to ensuring growth in developing countries is to foster individual talent and abilities, build self-reliance, and put people in a position to make a broader contribution to society. Growth must be inclusive, and no one must be left behind.”-Shinzo Abe

“I believe it is important that we Japanese write a constitution for ourselves that would reflect the shape of the country we consider desirable in the 21st century.”-Shinzo Abe

“I have experienced failure as a politician and for that very reason, I am ready to give everything for Japan.”-Shinzo Abe

“I have learned that being a politician is not an easy job. My father was trying to make progress in the peace treaty with the Soviet Union. At that time, he was suffering from last-stage cancer, but he visited Moscow in the bitter cold.”-Shinzo Abe

“I learned from my father that you may have to risk your own life to make such a historic accomplishment.”-Shinzo Abe

“I have no idea who first coined the word ‘Abenomics.’ It was not my original term for the set of anti-deflation, growth-promotion policies I am now pursuing.”-Shinzo Abe

“I swear I will do everything in my power to change the situation in Tibet where human rights are being suppressed. Tibet seeks freedom and democracy and we agree on those values.”-Shinzo Abe

“I think it is the responsibility of anyone involved in politics to always think of what Japan can do to contribute more to the peace and stability not just of Japan and the region but of the entire world.”-Shinzo Abe

“I will aim to restore the Japan-U.S. alliance and Japan’s strong diplomatic capabilities. Japan can’t pursue a strong foreign policy without strengthening its alliance with the United States.”-Shinzo Abe

“In every country and region, there are practices and ways of living and culture that have been handed down from ancestors. Naturally, I feel that these should be respected.”-Shinzo Abe

“In Japan, usually, once you become prime minister, you do not have a second chance.”-Shinzo Abe

“Innovation and corporate governance are extremely important to improve the profitability of Japanese companies and encourage them to increase wages, capital spending, and dividends.”-Shinzo Abe

“It was in the first Abe administration that we started the mutually beneficial relationship based on common strategic interests between Japan and China.”-Shinzo Abe

“Japan and Australia share the universal values of freedom, democracy, the rule of law, and fundamental human rights.”-Shinzo Abe

“Japan has consistently remained a friend of Indonesia since the end of World War II and has regarded cooperation with Indonesia as a top priority.”-Shinzo Abe

“My hope is that the 21st century will be the first century where there will be no violation of human rights, and to that end, Japan would like to do our utmost.”-Shinzo Abe

“My opinion is that politicians should be humble in the face of history. And whenever history is a matter of debate, it should be left in the hands of historians and experts.”-Shinzo Abe

“Since the start of the Abe administration, we resumed peace treaty negotiations with Russia, which had lapsed during the three years of the Democratic Party of Japan administration.”-Shinzo Abe

“The dolphin fishing that takes place in Taiji town is an ancient fishing practice deeply rooted in their culture and their practices and supports their livelihoods.”-Shinzo Abe

“The Japan-U.S. alliance is an irreplaceable alliance. And I would like to further consolidate and broaden that alliance.”-Shinzo Abe

“The Senkaku Islands are an integral part of Japanese territory based on international law as well as in the context of our history.”-Shinzo Abe

“The United Nations was founded 70 years ago, at the end of World War II. Since that time, Japan has steadfastly walked the path of peace and rebuilt a nation. And, since the mid-1950s onward, we have actively worked to share our experience of development with other nations, especially in Asia.”-Shinzo Abe

“The visits Prime Minister Koizumi made to the Yasukuni Shrine, I believe, had nothing to do with approval ratings. He paid respects at the Yasukuni Shrine to pay respects to the people of Japan who fought and lost their lives for the country and to pray for the peace of their souls.”-Shinzo Abe

“To protect people’s lives and keep our children safe, we must implement public-works spending and do so proudly. If possible, I’d like to see the Bank of Japan purchase all of the construction bonds that we need to issue to cover the cost. That would also forcefully circulate money in the market. That would be positive for the economy, too.”-Shinzo Abe

“To serve as prime minister while being too mindful of the approval rating is like serving as a prime minister on a roller coaster. What is important, I believe, is that I really act on promises that I make and leave results. Leave a track record and show that to the Japanese public, who will, at the end of the day, I hope, appreciate it.”-Shinzo Abe

“We welcome the Obama administration’s policy called the ‘pivot to Asia’ because it is a contributing factor to the safety and peace of the region. I think this pivot policy is playing an indispensable role in enhancing the deterrence of the U.S.-Japan alliance as well as ensuring peace and security in the Asia-Pacific region.”-Shinzo Abe

“When I came to office, in terms of diplomacy and national security, as well as the economy, Japan was in a very severe situation.”-Shinzo Abe

“When I served as prime minister last time, I failed to prioritize my agenda. I was eager to complete everything at once and ended my administration in failure. After resigning, for six years I traveled across the nation simply to listen.”-Shinzo Abe