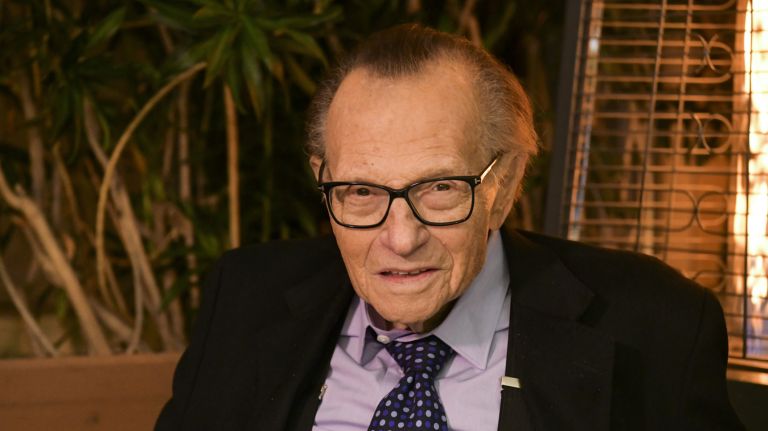 Larry King Quotes:- Larry King (born November 19, 1933) is an American television and radio host, whose work has been recognized with awards including two Peabodys, an Emmy award, and 10 Cable ACE Awards.

“Good writers are in the business of leaving signposts saying, Tour my world, see and feel it through my eyes; I am your guide.”-Larry King 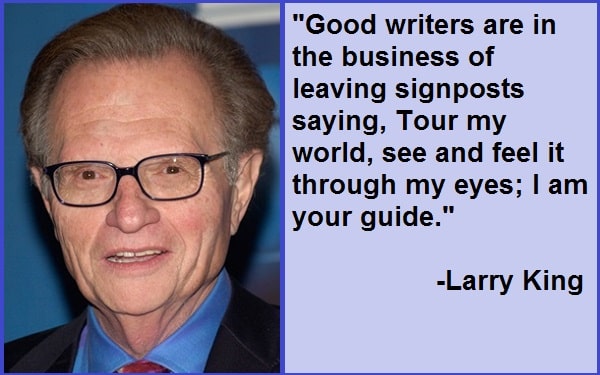 “My father died when I was nine and a half. We were in relief for two years. They call it welfare now, but it was a relief then… I never forgot the generosity of New York.”-Larry King

“I remind myself every morning: Nothing I say this day will teach me anything. So if I’m going to learn, I must do it by listening.”-Larry King

“Getting your house in order and reducing the confusion gives you more control over your life. Personal organization some how releases or frees you to operate more effectively.”-Larry King

“I have never understood the Iowa caucus.”-Larry King

“With 500 channels and the Internet available, you’d think a candidate could get the word out.”-Larry King

“When I was 5 years old I would lie in bed, look at the radio, and I wanted to be on the radio. I don’t know why.”-Larry King

“If they asked me, I did two shifts. I did sports, I did the news because I loved it.”-Larry King

“Gleason became like a mentor of mine. I had Gleason helping me on television, Godfrey on the radio.”-Larry King

“I have lifelong friends. My oldest friend, Herbie, has been a friend since I was 9. I’ve had bonds for over 50 years with people.”-Larry King

“If I do something caring for a friend, I have no doubt in my mind they would do it for me.”-Larry King

“I’ve made a lot of mistakes. I’ve bonded with some people who use you, and some people that take advantage of you.”-Larry King

“It’s joyful to give. But for people who want to take advantage of you, you’re kind of an easy mark.”-Larry King

“I like to put a stake in people because I know people helped me.”-Larry King

“Les Miserables is one of my favorite stories.”-Larry King

“Communications is the number one major in America today. CNN had 25,000 applicants for five intern jobs this summer.”-Larry King

“People would pay money to work at CNN.”-Larry King

“When I broke in, in 1957, it was wide open. Now you’re up against the strong competition.”-Larry King

“I’m having as much fun today as I did when I made $55 a week because it is as much fun.”-Larry King

“The names are bigger, the show is worldwide, but I get a royal pass into life in the broadcasting business.”-Larry King

“If you do something, expect consequences.”-Larry King

“I’m sort of the comic relief after a hard day at work. My message is that it’s OK to relax.”-Larry King

“I’m from Brooklyn. In Brooklyn, if you say, ‘I’m dangerous’, you’d better be dangerous.”-Larry King

“Sandy Koufax went to the same school as me. I graduated two years ahead of Sandy.”-Larry King

“I’ve taken my boys to the house I grew up in. Taken them to the site of Ebbets Field, where the Dodgers used to play. They go to all the Dodger games, and they play Little League ball. I have infused them with the New York spirit.”-Larry King

“I’ve got a nice car. I love my job. I’ve got a bagel store, and I have breakfast every morning with friends I grew up with. I’ve been in movies, I’ve written books – I don’t know how that all happened.”-Larry King

“I had no trouble going from radio to TV – I just thought of TV as radio with pictures.”-Larry King

“I did everything when I started. In Miami I did news, I did the weather, I did sports, I did disk-jockeying. And I did a sports talk show every week – every Saturday night.”-Larry King

“Sports are my favorite. It’s the first thing I turn to every day.”-Larry King

“Who wouldn’t want to be Frank Sinatra’s son?”-Larry King

“I want to be frozen on the hope that they’ll find whatever I died of and bring me back.”-Larry King

“My biggest fear is death because I don’t think I’m going anywhere. And since I don’t think that, and I don’t have a belief… I’m married to someone who has the belief, so she knows she’s going somewhere.”-Larry King

“When you reach a certain age, and people see you on television, they look at you and think, ‘Wow! Everything must be great!’ Well, everything isn’t always great. You can be hailed on the street corner, but you still have to go home and take out the garbage.”-Larry King

“I worked at CNN for almost 26 years. I worked in Mutual Radio for 20 years. I’ve been in the business for 57 years. I have never seen a bias off the air or on.”-Larry King

“I have never seen anyone at CNN ever say, ‘Boy, here’s how we’re going to deal with this today to put this guy down and elevate this guy up.’ I’ve never seen it.”-Larry King

“I’ve never seen anyone say, ‘Let’s go get this person today; let’s really ram it into him.’ I’ve never seen it. If a Democrat or Republican commits some horrendous story, the story will run. The networks will cover it.”-Larry King

“The rich don’t win elections. They support the money, but what percentage of America is rich? What is it, 2 percent? But they all have one vote.”-Larry King

“Anything can happen when people run for office.”-Larry King

“I’ve done hundreds of interviews on guns. I’m against people who use guns. I don’t like guns, but I’ve never yelled at anyone.”-Larry King

“I don’t wish anybody ill, I really don’t. I’ve got a lot of faults, but I was never jealous or envious or… it’s a waste of time.”-Larry King

“I thought I would be a sports announcer. All I was was a curious kid who wanted to be on the radio.”-Larry King

“The Kardashians can be famous for being famous. What do they do? I can’t figure it out.”-Larry King

“I don’t know what a softball question is. All I know is I have no agenda. I ask short questions, and I listen to the answer.”-Larry King