Lord Byron Quotes:- Lord Byron (22 January 1788 – 19 April 1824) was an English poet, peer, and politician who became a revolutionary in the Greek War of Independence, and is considered one of the leading figures of the Romantic movement.

“This man is freed from servile bands, Of hope to rise, or fear to fall; Lord of himself, though not of lands, And leaving nothing, yet hath all.”-Lord Byron 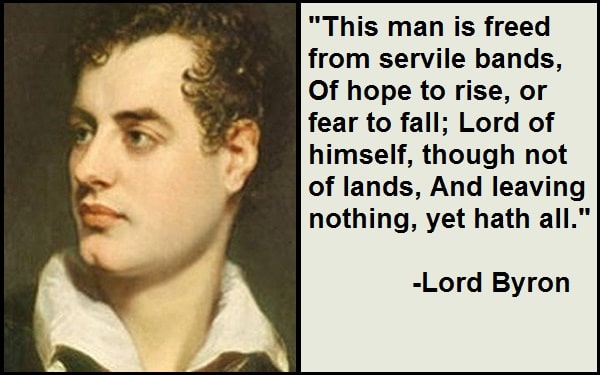 “I have great hopes that we shall love each other all our lives as much as if we had never married at all.”-Lord Byron

“Death, so-called, is a thing which makes men weep, And yet a third of life is passed in sleep.”-Lord Byron

“A celebrity is one who is known to many persons he is glad he doesn’t know.”-Lord Byron

“Men think highly of those who rise rapidly in the world; whereas nothing rises quicker than dust, straw, and feathers.”-Lord Byron

“He who is only just is cruel. Who on earth could live were all judged justly?”-Lord Byron

“Let none think to fly the danger for soon or late love is his own avenger.”-Lord Byron

“Like the measles, love is most dangerous when it comes late in life.”-Lord Byron

“Yes, love indeed is light from heaven; A spark of that immortal fire with angels shared, by Allah given to lift from earth our low desire.”-Lord Byron

“‘Tis sweet to know there is an eye will mark our coming, and look brighter when we come.”-Lord Byron

“Those who will not reason, are bigots, those who cannot, are fools, and those who dare not, are slaves.”-Lord Byron

“There is something pagan in me that I cannot shake off. In short, I deny nothing but doubt everything.”-Lord Byron

“One certainly has a soul, but how it came to allow itself to be enclosed in a body is more than I can imagine. I only know if once mine gets out, I’ll have a bit of a tussle before I let it get in again to that of any other.”-Lord Byron

“I have no consistency, except in politics; and that probably arises from my indifference to the subject altogether.”-Lord Byron

“My turn of mind is so given to taking things in the absurd point of view, that it breaks out in spite of me every now and then.”-Lord Byron

“Why I came here, I know not; where I shall go it is useless to inquire – in the midst of myriads of the living and the dead worlds, stars, systems, infinity, why should I be anxious about an atom?”-Lord Byron

“It is odd but agitation or contest of any kind gives a rebound to my spirits and sets me up for a time.”-Lord Byron

“I cannot help thinking that the menace of Hell makes as many devils as the severe penal codes of inhuman humanity make villains.”-Lord Byron

“What is the worst of woes that wait on age? What stamps the wrinkle deeper on the brow? To view each loved one blotted from life’s page, And be alone on earth, as I am now.”-Lord Byron

“Man, being reasonable, must get drunk; the best of life is but intoxication.”-Lord Byron

“America is a model of force and freedom and moderation – with all the coarseness and rudeness of its people.”-Lord Byron

“I would rather have a nod from an American, than a snuff-box from an emperor.”-Lord Byron

“Out of chaos, God made a world, and out of high passions comes a people.”-Lord Byron

“I have a great mind to believe in Christianity for the mere pleasure of fancying I may be damned.”-Lord Byron

“Her great merit is finding out mine – there is nothing so amiable as discernment.”-Lord Byron

“There’s naught, no doubt, so much the spirit calms as rum and true religion.”-Lord Byron

“But what is Hope? Nothing but the paint on the face of Existence; the least touch of truth rubs it off, and then we see what a hollow-cheeked harlot we have got hold of.”-Lord Byron

“This is the patent age of new inventions for killing bodies, and for saving souls. All propagated with the best intentions.”-Lord Byron

“For pleasures past, I do not grieve, nor perils gathering near; My greatest grief is that I leave nothing that claims a tear.”-Lord Byron

“Lovers may be – and indeed generally are – enemies, but they never can be friends, because there must always be a spice of jealousy and a something of Self in all their speculations.”-Lord Byron

“I know that two and two make four – and should be glad to prove it too if I could – though I must say if by any sort of process I could convert 2 and 2 into five it would give me much greater pleasure.”-Lord Byron

“Though sages may pour out their wisdom’s treasure, there is no sterner moralist than pleasure.”-Lord Byron

“We are all selfish and I no more trust myself than others with a good motive.”-Lord Byron

“As long as I retain my feeling and my passion for Nature, I can partly soften or subdue my other passions and resist or endure those of others.”-Lord Byron

“I only go out to get me a fresh appetite for being alone.”-Lord Byron

“Opinions are made to be changed – or how is truth to be got at?”-Lord Byron

“I should be very willing to redress men wrongs, and rather check than punish crimes, had not Cervantes, in that all too true tale of Quixote, shown how all such efforts fail.”-Lord Byron

“If we must have a tyrant, let him at least be a gentleman who has been bred to the business, and let us fall by the ax and not by the butcher’s cleaver.”-Lord Byron

“Every day confirms my opinion on the superiority of a vicious life – and if Virtue is not its own reward I don’t know any other stipend annexed to it.”-Lord Byron

“Society is now one polished horde, formed of two mighty tribes, the Bores and Bored.”-Lord Byron

“In England the only homage which they pay to Virtue – is hypocrisy.”-Lord Byron

“He who surpasses or subdues mankind Must look down on the hate of those below.”-Lord Byron

“It is useless to tell one not to reason but to believe – you might as well tell a man not to wake but sleep.”-Lord Byron

“Man is born passionate of body, but with an innate though secret tendency to the love of Good in his main-spring of Mind. But God help us all! It is at present a sad jar of atoms.”-Lord Byron

“Man’s love is of man’s life a part; it is a woman’s whole existence. In her first passion, a woman loves her lover, in all the others all she loves is love.”-Lord Byron

“Roll on, deep and dark blue ocean, roll. Ten thousand fleets sweep over thee in vain. Man marks the earth with ruin, but his control stops with the shore.”-Lord Byron

“But words are things, and a small drop of ink, Falling like dew, upon a thought, produces That which makes thousands, perhaps millions, think.”-Lord Byron

“There is no such thing as a life of passion any more than a continuous earthquake, or an eternal fever. Besides, who would ever shave in such a state?”-Lord Byron

“A woman who gives any advantage to a man may expect a lover but will sooner or later find a tyrant.”-Lord Byron

“Shelley is truth itself and honors itself notwithstanding his out-of-the-way notions about religion.”-Lord Byron

“The fact is that my wife if she had common sense, would have more power over me than any other whatsoever, for my heart always alights upon the nearest perch.”-Lord Byron

“What should I have known or written had I been a quiet, mercantile politician or a lord in waiting? A man must travel, and turmoil or there is no existence.”-Lord Byron