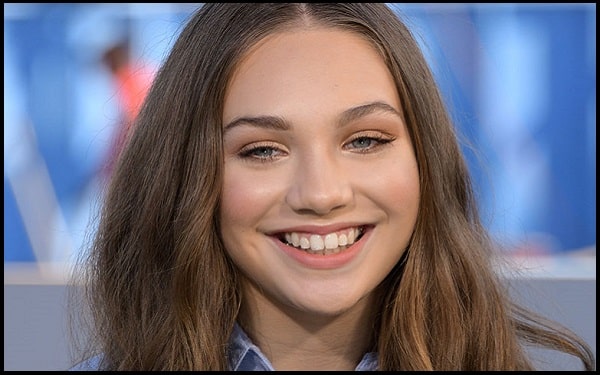 “I love doing hair and makeup and making ‘Video Star’ videos with my friend, Kendall. I also love to draw. But my life is dance, dance, and more dance. I wouldn’t want it any other way.”-Jeff Fisher 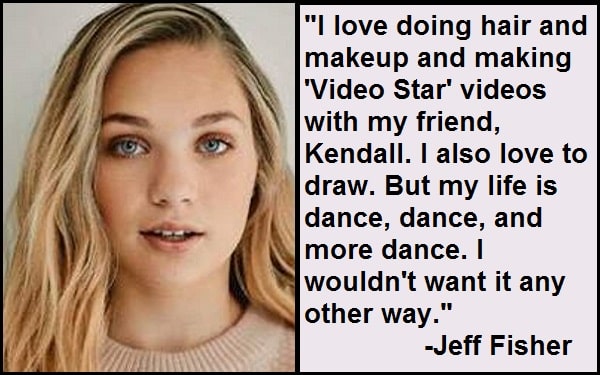 “When I came back from filming the ‘Chandelier’ video, everyone was like, ‘So what’d you wear? What did the room look like? How many chandeliers were there?’ And I was like, ‘Well, I wore a blond wig, a nude leotard, the room was dirty, and there was no chandelier.'”-Jeff Fisher

“I like Sprite a lot, but I try not to drink it. My mom doesn’t want me to drink Sprite because it’s unhealthy. So she always has me drink water, but it’s hard not to!”-Jeff Fisher

“I usually get home from a dance at 10 every night, and I’ll watch TV for about 30 minutes, and then I’ll go to bed.”-Jeff Fisher

“All I do is watch dance videos. I love Ricky Ubeda, who is a contemporary dancer, and I also love Madison Cubbage. They inspire me to work harder every day.”-Jeff Fisher

“I’d love to do something where I can act and dance at the same time, like on Broadway or in movies.”-Jeff Fisher

“Every time I do a talk show or something, I’ll be like, ‘I’m doing ‘Chandelier,’ right?’ and they’re like, ‘No, you’re doing a skit and three dances.’ It’s different every time. I never really know what I’m doing until the day before.”-Jeff Fisher

“On a scale of one to 10, I feel I’m at a nine because there’s definitely room for improvement. I know I could go further.”-Jeff Fisher

“I particularly want more acting. I’ve been auditioning a lot, and I definitely want to act.”-Jeff Fisher

“My favorite TV show is ‘Pretty Little Liars,’ and I actually made a guest appearance on it. I didn’t really have lines for my character, but I definitely want to get more into those kinds of shows.”-Jeff Fisher

“I really want to keep modeling, but it’s not my number one goal in life. But it’s so fun. I love doing it; it’s just that – it’s not like I just want to be a model when I’m older.”-Jeff Fisher

“Dance has definitely made me a better role model. When I’m performing, I’m always thinking about my face and my look. I used to have a much harder time with it.”-Jeff Fisher

“I’ve been dancing since the age of two. I don’t really remember it, because I was little, but my mom signed me up and would put me in cute costumes. A lot of little girls get into dancing, but I loved it so much that I kept doing it.”-Jeff Fisher

“I started with ballet, and once I started to really like it, I got into more – I did jazz and tap, and then kept going.”-Jeff Fisher

“With ‘Dance Moms’ in L.A., we film on Wednesday, Thursday, Friday, and Saturday. When we film in Pittsburgh, we film the same days, but we still dance in our studio when we’re not filming, so I’m dancing every day except Sunday.”-Jeff Fisher

“I’m a beauty guru, I just love all of that stuff. We have a makeup artist for ‘Dance Moms’ that touch us up and stuff, but I love doing my own makeup; sometimes I do my friends, too. My favorite is doing eye shadow and eyeliner.”-Jeff Fisher

“For filming, we have to wear a lot more makeup than we usually would. At night, I have to go home and take off all the makeup and take my hair out from my bun and just get out of the dancewear and everything.”-Jeff Fisher

“Before I go to bed, I brush my teeth and take off all my makeup. I like to use Neutrogena’s makeup remover wipes.”-Jeff Fisher

“I’d love to be on scripted TV shows and movies, but not just one – I want to be in a lot of them! I’d also love to sing and possibly be on Broadway. I want to do it all.”-Jeff Fisher

“Everyone’s like, ‘Oh, you must live in L.A., the glamorous life,’ and I really don’t. I’m in a small house, in Pittsburgh, in the snow.”-Jeff Fisher

“I don’t want to be known as just a ‘Dance Moms’ competitor. I’d really like to be known for all of Sia’s work, too.”-Jeff Fisher

“I would love to be an amazing singer. I take voice lessons. It’s good to have as a dancer – to be able to sing and act, too, because, for a Broadway show or musical, you have to be able to do everything.”-Jeff Fisher

“My dance teacher will show me pictures of girls who are rhythmic gymnasts, and they are super skinny. But I don’t want to be too skinny. I think that looks a little gross when you are dancing. You don’t want to be a scrawny, bony thing.”-Jeff Fisher

“I don’t work with Sia every day; it depends on what we do, whether we do performances or music videos, so the schedule is weird, but when we’re off, we always try to see each other in between. We just hang out; we went to brunch one time, but for the most part, I go to her house, and we eat and watch TV.”-Jeff Fisher

“I never thought that I’d be dancing with Shia LaBeouf. When I heard he was going to be my partner, I was like, ‘Does he even dance?’ He doesn’t, really, but he’s such a sweet person.”-Jeff Fisher

“I met Drew Barrymore, and she was so cool. She told me, ‘I know I just had my baby three weeks ago, and that’s why I’m emotional, but I cried when you performed.’ And then she pulled out a tissue and said, ‘Look, I was sobbing.'”-Jeff Fisher