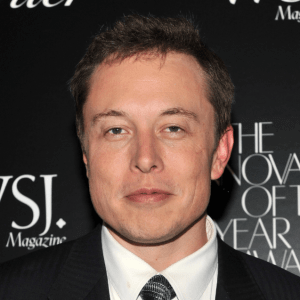 Elon Reeve Musk (born June 28, 1971) is a South African-born American entrepreneur and businessman who founded X.com in 1999 (which later became PayPal), SpaceX in 2002, and Tesla Motors in 2003. Musk became a multimillionaire in his late 20s when he sold his start-up company, Zip2, to a division of Compaq Computers.


Musk made headlines in May 2012, when SpaceX launched a rocket that would send the first commercial vehicle to the International Space Station. He bolstered his portfolio with the purchase of SolarCity in 2016, and cemented his standing as a leader of industry by taking on an advisory role in the early days of President Donald Trump‘s administration.

“A battery by definition is a collection of cells. So the cell is a little can of chemicals. And the challenge is taking a very high-energy cell, and a large number of them, and combining them safely into a large battery.” -Elon Musk

“A Prius is not a true hybrid, really. The current Prius is, like, 2 percent electric. It’s a gasoline car with slightly better mileage.” -Elon Musk

“America is the spirit of human exploration distilled.” -Elon Musk

“An asteroid or a supervolcano could certainly destroy us, but we also face risks the dinosaurs never saw: An engineered virus, nuclear war, inadvertent creation of a micro black hole, or some as-yet-unknown technology could spell the end of us.”-Elon Musk

“Any product that needs a manual to work is broken.”-Elon Musk

“As you heat the planet up, it’s just like boiling a pot.”-Elon Musk

“Even if producing CO2 was good for the environment, given that we’re going to run out of hydrocarbons, we need to find some sustainable means of operating.”-Elon Musk

“Facebook is quite entrenched and has a network effect. It’s hard to break into a network once it’s formed.”-Elon Musk

“For all the supporters of Tesla over the years, and it’s been several years now and there have been some very tough times, I’d just like to say thank you very much. I deeply appreciate the support, particularly through the darkest times.”-Elon Musk

“From an evolutionary standpoint, human consciousness has not been around very long. A little light just went on after four and a half billion years. How often does that happen? Maybe it is quite rare.”-Elon Musk

“Here in the West, people often don’t like listening to their leaders, even if they are right.”-Elon Musk

“I do love email. Wherever possible I try to communicate asynchronously. I’m really good at email.”-Elon Musk

“I do think there should be some regulations on AI.”-Elon Musk

“I don’t create companies for the sake of creating companies, but to get things done.”-Elon Musk

“I don’t spend my time pontificating about high-concept things; I spend my time-solving engineering and manufacturing problems.”-Elon Musk

“I don’t think it’s a good idea to plan to sell a company.”-Elon Musk

“I feel very strongly that SpaceX would not have been able to get started, nor would we have made the progress that we have, without the help of NASA.”-Elon Musk

“I had so many people try to talk me out of starting a rocket company, it was crazy.”-Elon Musk

“I think it matters whether someone has a good heart.”-Elon Musk 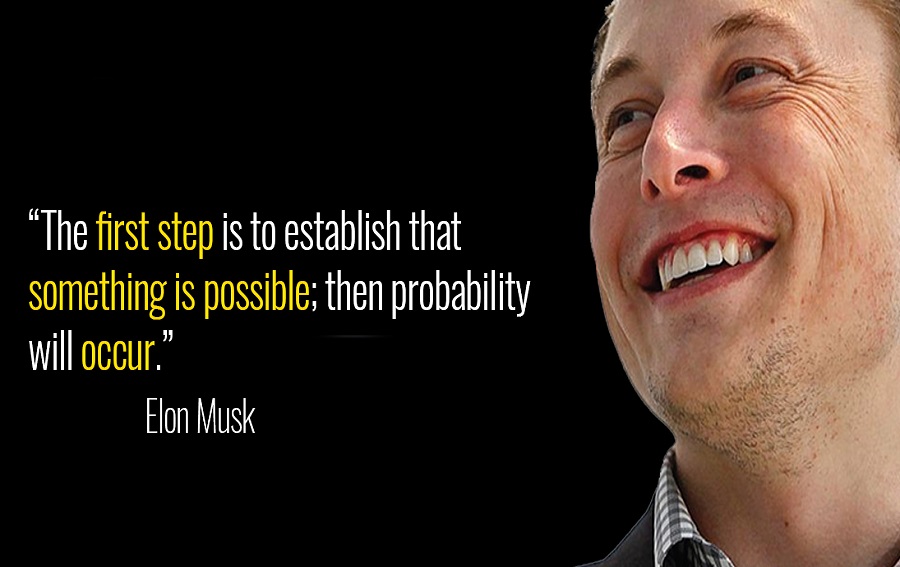 “I think life on Earth must be about more than just solving problems… It’s got to be something inspiring, even if it is vicarious.”-Elon Musk

“I think long term you can see Tesla establishing factories in Europe, in other parts of the U.S. and in Asia.”-Elon Musk

“I think there should be regulations on social media to the degree that it negatively affects the public good.”-Elon Musk


“I think we are at the dawn of a new era in commercial space exploration.”-Elon Musk

“I think we have a duty to maintain the light of consciousness to make sure it continues into the future.”-Elon Musk

“I think you should always bear in mind that entropy is not on your side.”-Elon Musk

“I usually describe myself as an engineer; that’s basically what I’ve been doing since I was a kid.”-Elon Musk

“I will never be happy without having someone. Going to sleep alone kills me.”-Elon Musk

“I wish we could be private with Tesla. It actually makes us less efficient to be a public company.”-Elon Musk

“I would like to die on Mars. Just not on impact.”-Elon Musk 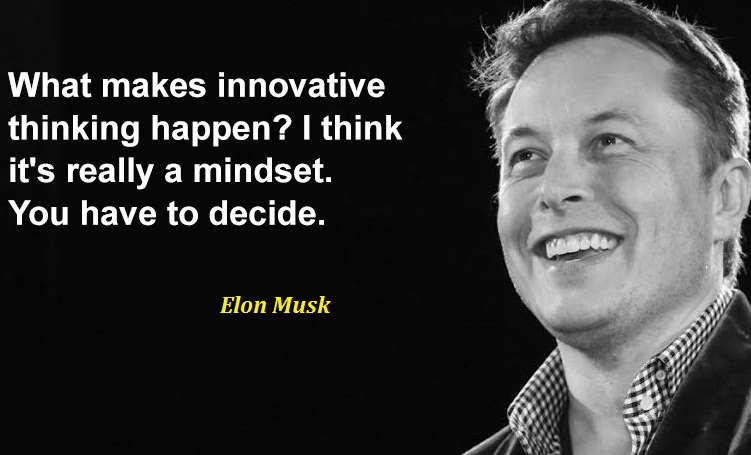 “If anyone has a vested interest in space solar power, it would have to be me.”-Elon Musk

“If humanity doesn’t land on Mars in my lifetime, I would be very disappointed.”-Elon Musk

“If I’m not in love, if I’m not with a long-term companion, I cannot be happy.”-Elon Musk

“If something’s important enough, you should try. Even if you – the probable outcome is a failure.”-Elon Musk

“If we drive down the cost of transportation in space, we can do great things.”-Elon Musk

“If you get up in the morning and think the future is going to be better, it is a bright day. Otherwise, it’s not.”-Elon Musk

“If you had to buy a new plane every time you flew somewhere, it would be incredibly expensive.”-Elon Musk

“If you think back to the beginning of cell phones, laptops or really any new technology, it’s always expensive.”-Elon Musk

“If you’re trying to create a company, it’s like baking a cake. You have to have all the ingredients in the right proportion.”-Elon Musk 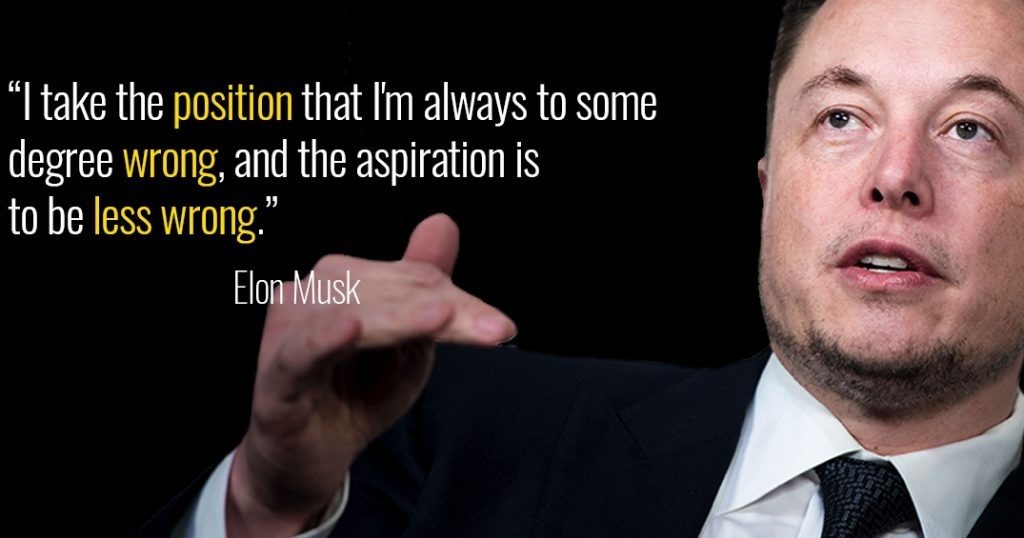 “I’m glad to see that BMW is bringing an electric car to market. That’s cool.”-Elon Musk

“I’m personally a moderate and a registered independent, so I’m not strongly Democratic or strongly Republican.”-Elon Musk

“I’m reasonably optimistic about the future, especially the future of the United States – for the century, at least.”-Elon Musk

“I’m trying to construct a world that maximizes the probability that SpaceX continues its mission without me.”-Elon Musk

“In order for us to have a future that’s exciting and inspiring, it has to be one where we’re a space-bearing civilization.”-Elon Musk

“In order to have your voice be heard in Washington, you have to make some little contribution.”-Elon Musk

“In the early days of aviation, there was a great deal of experimentation and a high death rate.”-Elon Musk

“It’s OK to have your eggs in one basket as long as you control what happens to that basket.”-Elon Musk

“It’s very important to like the people you work with. Otherwise, your job is going to be quite miserable.”-Elon Musk

“I’ve actually not read any books on time management.”-Elon Musk

“I’ve been to Disneyland, like, 10 times. I’m getting really tired of Disneyland.”-Elon Musk

“Land on Mars, a round-trip ticket – half a million dollars. It can be done.”-Elon Musk

“Life is too short for long-term grudges.”-Elon Musk

“Man has the power to act as his own destroyer – and that is the way he has acted through most of his history.”-Elon Musk

“Mars is the only place in the solar system where it’s possible for life to become multi-planetarian.”-Elon Musk

“My opinion is it’s a bridge too far to go to fully autonomous cars.”-Elon Musk

“Patience is a virtue, and I’m learning patience. It’s a tough lesson.”-Elon Musk

“Really, the only thing that makes sense is to strive for greater collective enlightenment.”-Elon Musk

“Rockets are cool. There’s no getting around that.”-Elon Musk

“Self-driving cars are the natural extension of active safety and obviously something we should do.”-Elon Musk

“Tesla is here to stay and keep fighting for the electric car revolution.”-Elon Musk

“The key to making things affordable is design and technology improvements, as well as scale.”-Elon Musk

“The reason we should do a carbon tax is because it’s the right thing to do. It’s economics 101, elementary stuff.”-Elon Musk

“The rumors of the demise of the U.S. manufacturing industry are greatly exaggerated.”-Elon Musk

“We are the first species capable of self-annihilation.”-Elon Musk

“When I was in college, I wanted to be involved in things that would change the world.”-Elon Musk

“When something is important enough, you do it even if the odds are not in your favor.”-Elon Musk 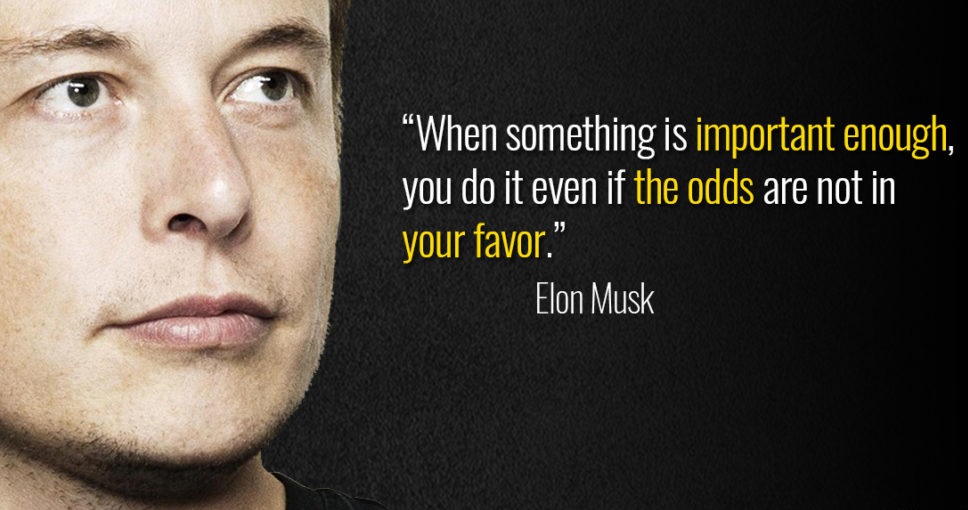 “Winning ‘Motor Trend’ Car of the year is probably the closest thing to winning the Oscar or Emmy of the car industry.”-Elon Musk

“You could warm Mars up, over time, with greenhouse gases.”-Elon Musk