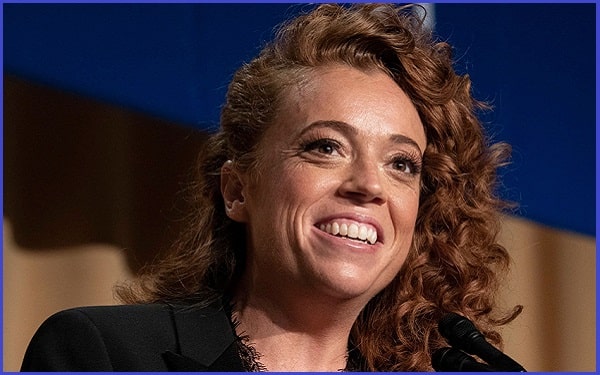 Michelle Wolf Quotes:- Michelle Wolf (born June 21, 1985) is an American comedian, writer, producer, and television host. She worked as a contributor and writer for Late Night with Seth Meyers and The Daily Show with Trevor Noah.

“I always almost miss my flight. My routine is to constantly, no matter how bad or good the traffic is, to almost missing my flight.”-Michelle Wolf 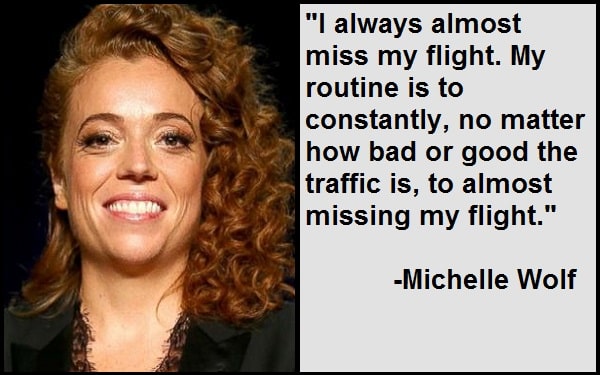 “When I’m on the road, I eat like I’m on the third day of a hiking trip all the time. I’m eating beef jerky and trail mix constantly.”-Michelle Wolf

“Some comedy has turned into, ‘Donald Trump’s bad, isn’t he?’ That’s a true statement. But where is your joke?”-Michelle Wolf

“Before comedy, I worked at a tech company, and before that, I worked on Wall Street. And, honestly, I’ve never really been sexually harassed.”-Michelle Wolf

“A lot of people want Trump to be impeached. I do not. Because just when you think Trump is awful, you remember Mike Pence. Mike Pence is what happens when Anderson Cooper isn’t gay.”-Michelle Wolf

“Mike Pence is the kind of guy that brushes his teeth and then drinks orange juice and thinks, ‘Mmm.'”-Michelle Wolf

“Watching Rachel Maddow is like going to Target. You went in for milk, but you left with shampoo, candles, and the entire history of the Byzantine Empire. ‘I didn’t need this.'”-Michelle Wolf

“A good joke can work in New York and Kentucky.”-Michelle Wolf

“The most useful information on CNN is when Anthony Bourdain tells me where to eat noodles.”-Michelle Wolf

“We cannot forget about Rachel Maddow. She is the Peter Pan of MSNBC. But instead of never growing up, she never gets to the point.”-Michelle Wolf

“The jig is up: I’m not a nice lady.”-Michelle Wolf

“I am a feminist.”-Michelle Wolf

“I straighten my hair very few times throughout the year, and it’s only in the cold winter months because it’s the only time my hair will stay straight. If there is, like, a tiny bit of humidity in the air, it’s curly again.”-Michelle Wolf

“There’s something about us as stand-ups that when we’re on our feet, we feel more in control of the situation and in control of our bodies and our delivery.”-Michelle Wolf

“There’s a lot of nuances to stand-up that you definitely see when you watch someone like Chris Rock in that his body position is also part of why the joke works.”-Michelle Wolf

“It’s important for people to, instead of automatically assuming everything the opposite side says is incorrect, you have to at least listen and see why someone might feel a certain way.”-Michelle Wolf

“The thing that’s frustrating about improv is that even if you have the best show in the world, it’s over when it’s over. You get to build stand-up – I really like that aspect of it. I like writing jokes, and you don’t get to do that in improv.”-Michelle Wolf

“It’s hard to make a joke out of someone that’s a joke.”-Michelle Wolf

“I was a kinesiology major in college, which is exercise science. Then, I was either going to get my Ph.D. or go to medical school, but I was kind of burned out after school.”-Michelle Wolf

“I always loved comedy, but in my mind, it wasn’t a viable career option. I always thought, ‘You go to college. You get a job, and then you pay off college.'”-Michelle Wolf

“I took an improv class, and after my first class, I was like, ‘Oh, I just want to do something like this. This is super fun.'”-Michelle Wolf

“I’ve watched ‘The Daily Show’ forever. So being a part of it is surreal.”-Michelle Wolf

“You know how I know I’m white? I can cry myself out of a parking ticket.”-Michelle Wolf

“The more confident I am, the more daring I am.”-Michelle Wolf

“It’s one thing to be funny in a tweet. It is another to be funny for an hour.”-Michelle Wolf

“Twitter is a good medium to learn how to write jokes. It pushes you to write a better joke in that, on Twitter, the first joke about something has already happened. You need to think of the second joke and the third joke.”-Michelle Wolf

“Writing for late night is really good for learning how to write when you don’t want to write. You have to produce every day. It’s also very good for refining the difference between your point of view and the host’s.”-Michelle Wolf

“Before stand-up, I’m not sure I even had a point of view.”-Michelle Wolf

“I’ve been lucky enough to do a lot of very interesting things, and every time, I’ve been like, ‘I want to put everything into this because I want to see how far I can go with it.'”-Michelle Wolf

“I’m so lucky that I found comedy and that I get to do it for a living.”-Michelle Wolf

“I think Trump is terrible for comedy. A lot of people say he is great. He’s not. You can’t joke a joke.”-Michelle Wolf

“There are only so many times you can say, ‘Trump tweeted something that was bad.’ That is not a joke to me.”-Michelle Wolf

“Comedy, in my opinion, is best when it’s in the gray, and you’re kind of pushing people’s thoughts that they sort of had but never vocalized. And I think a joke is not good if someone says something, and immediately people are clapping because they’re like, ‘Yes! That is how I feel as well!”-Michelle Wolf

“You don’t get to choose your voice! I was never like, ‘Oh, I’ll take the voice that causes dogs to gather outside.'”-Michelle Wolf


This blog is all about personal development and the ambition to create a lifestyle full of joy, happiness, consciousness, and success. Join us on the road to success and let us achieve the goals and visions we have ever dreamt of.