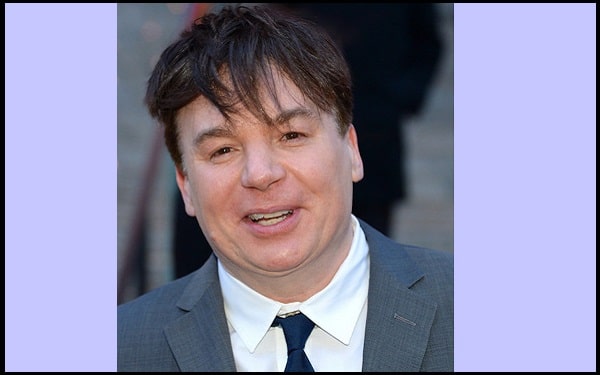 “Canada is a country of ingredients without a cuisine; we’re a country with musicians without an indigenous instrument; Toronto’s a city that doesn’t even have a dish named after it.”-Mike Myers 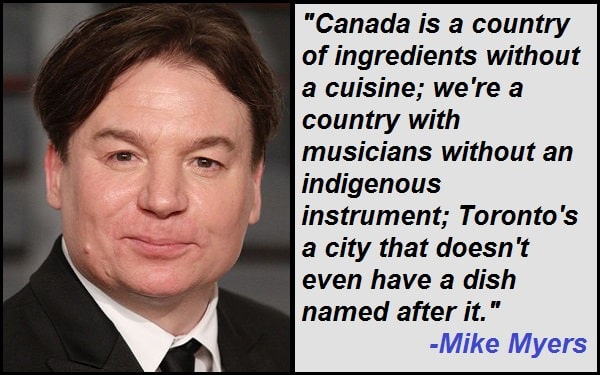 “My father was a very funny man, and one of my strongest recollections is hearing him laugh. He didn’t like people who had no sense of humor.”-Mike Myers

“So they ended up turning this little twenty eight page book into the movie. And it’s all about this stinky, smelly ogre who doesn’t care what anybody thinks of him.”-Mike Myers

“If I went by all the rejection I’ve had in my career, I should have given up a long time ago.”-Mike Myers

“My theory is that all of the Scottish cuisines are based on a dare.”-Mike Myers

“I think when I have kids and grandchildren I will be very proud to have them watch this movie.”-Mike Myers

“I have very happy memories of fairy tales. My mother used to take me to the library in Toronto to check out the fairy tales. And she was an actress, so she used to act out for me the different characters in all these fairy tales.”-Mike Myers

“Europe is scooters. Europe is five young people on one bench sharing a chocolate bar. Their idea of entertainment and fun is so much different than ours, which is exactly why a movie about them would be funny.”-Mike Myers

“Everything I do is autobiographical in some way. ‘Wayne’s World’ was me growing up in the suburbs of Toronto and listening to heavy metal, and ‘Austin Powers’ was every bit of British culture that my father, who passed away in 1991, had forced me to watch and taught me to love.”-Mike Myers

“Well, I like how people talk. I like the language. You know, Linda Richman spoke in Yiddish.”-Mike Myers

“Verne’s all about what you can do versus what you can’t do. He just kept saying yes and his part kept growing. I would love to work with him in every movie.”-Mike Myers

“The message of the movie is to accept who you are and not to succumb to the pressure of what the media tells you is beautiful and what you should be looking like.”-Mike Myers

“People ask me to record their answering machines all the time. I love it. It’s a miracle to me that people want to hear back those characters.”-Mike Myers

“My parents would read those books to me as well but they used to make me starving when I was a kid because they were always eating ham sandwiches with the crusts off and drinking ginger beer.”-Mike Myers

“My dad loved to laugh. He was very funny and very silly.”-Mike Myers

“My Dad was from Liverpool, and he picked it up in the army. He’d often come out with this stuff.”-Mike Myers

“I loved the logistical reality of a guy who wants to take over the world, yet who has a family too.”-Mike Myers

“I had a blast, but I still wonder sometimes why they saw me as the perfect guy for this strange character.”-Mike Myers

“For me, everything definitely comes from music.”-Mike Myers

“Europe is weird songs that would never make it in America.”-Mike Myers

“Comedy. It was just huge in my house. Peter Sellers and Alec Guinness, Monty Python and all those James Bond movies were highly regarded.”-Mike Myers

“Austin sounds a little bit like Aston Martin, which is the type of car James Bond would drive.”-Mike Myers

“And I love Mel Brooks. My Dad loved his movies, too, they’re awesome, the kind of thing that if you’re in for ten minutes, you’re in for two hours.”-Mike Myers

“I still believe that at any time the no-talent police will come and arrest me.”-Mike Myers

“My father was always a straight-up funny guy. He was silly. He was my inspiration.”-Mike Myers

“With fame, there is a crosswire between intensity and intimacy. You have decoy intimacy, but you are also very much alone.”-Mike Myers

“Marriage can be viewed as the waiting room for death.”-Mike Myers

“I’m a comedic actor, not to mix words, but it’s something I think about. A comedic actor. I like to think that Christopher Guest, Phil Hartman, Peter Sellers, and Alec Guinness are comedic actors. And Dan Aykroyd, too. Those are my heroes.”-Mike Myers

“I grew up in Toronto and as long as I can remember, as long as there was cable, even those old cable boxes that were wired to the TV, there have been Bollywood movies on Toronto TV.”-Mike Myers

“My dad sold encyclopedias and my mom worked in a factory office.”-Mike Myers

“Dad was in the British Army and my mom was in the Royal Air Force, so both of my parents believed in discipline.”-Mike Myers

“Once I turned 35, I got the bonus of some wisdom and began to accept life on its own terms.”-Mike Myers

“The interesting thing about life is, there is what you think is going to happen, and what actually happens.”-Mike Myers

“When I graduated from high school, I got accepted to York University, Fine Arts film program.”-Mike Myers

“Anyone who tells you fatherhood is the greatest thing that can happen to you, they are understating it.”-Mike Myers

“I can be described as many things, but no description of me is complete without saying ‘Englishman.’ My parents were from Liverpool and emigrated to Canada before I was born.”-Mike Myers

“Dad loved movies, and I grew up with a British comedy. My ultimate favorite is Peter Sellers.”-Mike Myers

“My parents taught me to do whatever makes you happy – follow your bliss. That’s why I don’t make a lot of movies. I only do what I love.”-Mike Myers

“On my death bed, I’m not going to say, ‘God I wish I did more movies.’ I’m perfectly happy I was present for the ones I did.”-Mike Myers

“In 1991, my father passed away and I went on a spiritual quest. It was a light one, not too terribly deep because I’m not terribly deep, and neither was my father.”-Mike Myers

“I was well indulged as a child by my relentlessly self-improving, working-class parents to express myself.”-Mike Myers

“Justin Timberlake is the single most talented human being I’ve ever met in my life, and it sickens me. He is, like, 12 years old or something! He has 0 percent body fat, he is musically gifted, he has a great ear for accents, and he is hilarious.”-Mike Myers

“I play the ukulele. I have a great group of friends, and we do things like have battles of the bands – me sometimes on the ukulele, but mostly on drums.”-Mike Myers

“There’s a joy in having the molecule of an idea, then testing it in front of audiences at secret shows that people only know about the night before.”-Mike Myers

“My father and mother emigrated to Canada in 1958, but there’s nobody more English than an Englishman who no longer lives in England, and our home was a shrine to all things English.”-Mike Myers