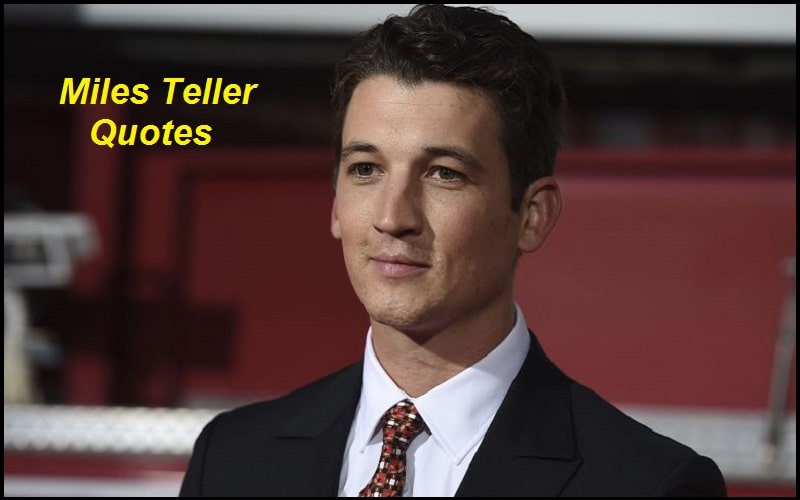 Miles Teller Quotes:- Miles Teller (born February 20, 1987) is an American actor. An alumnus of New York University’s Tisch School of the Arts, he made his feature film debut in Rabbit Hole, which he followed with supporting roles in Footloose and Project X.
Teller rose to prominence with his roles as Sutter Keely in the romantic drama The Spectacular Now and Andrew Neiman in Whiplash.

“There’s nothing I can control about how people see me as a person, but I can control how they think of me as an actor.”–Miles Teller 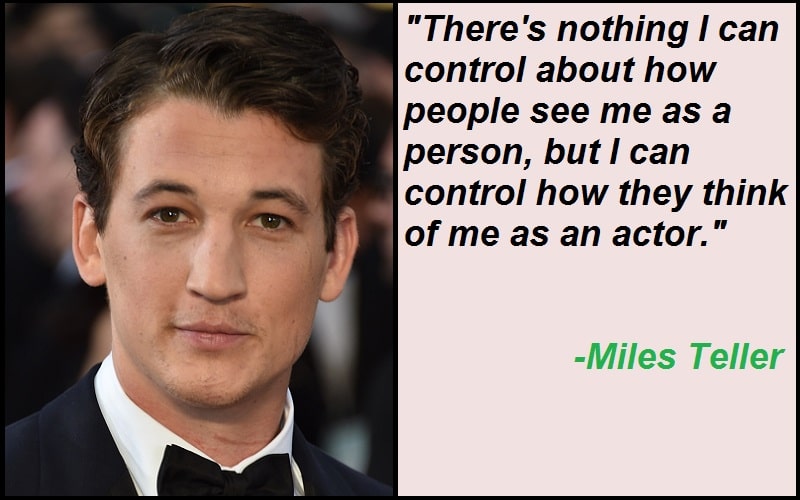 “I’m a pretty strong believer that everything happens for a reason.”-Miles Teller

“My second-grade teacher told me I would never graduate high school. That I was going to be a juvenile delinquent.”-Miles Teller

“When I was in high school, there was ‘Superbad’ and ‘The Girl Next Door’ and ‘Wedding Crashers’ and all these great movies. You hope to be a part of something that’s smart, funny and in that Todd Phillips-vein. You want to make something like ‘Superbad.’ That movie was so good and so funny.”-Miles Teller

“I just got an iPhone, which is cool, but I don’t download movies, I don’t watch Hulu, I don’t have Netflix. I don’t do any of that. But I do geek out to music.”-Miles Teller

“For me, I still have feelings for all of my ex-girlfriends. In different parts of my life, I would miss that person. There’s something that drew me to that person, and I shared something with them.”-Miles Teller

“So I think that at the beginning of your career you’re just looking to work. Luckily for me, my first movie was ‘Rabbit Hole’ and I got to work with incredible people, a Pulitzer prize-winning writer, John Cameron Mitchell, and all the actors involved. So it’s tough, man, because you want to have credibility.”-Miles Teller

“I used to have a big crush on Andie MacDowell.”-Miles Teller

“When I was in middle school, I always did well in school, but teachers either loved me or absolutely hated me.”-Miles Teller

“I got into acting in my junior year of high school. We got a new hot drama teacher and I was like ‘Alright, I’ll try drama.'”-Miles Teller

“Honestly, I’m not a big movie buff in general. The only movie I own is probably the ‘Indiana Jones’ trilogy.”-Miles Teller

“I’ve played drums in bands since I was 16.”-Miles Teller

“Living in somebody else’s pain for an actor man, it’s actually nice when you get to feel that kind of emotion. That’s what I like.”-Miles Teller

“I’m the first one out on the dance floor. In college I had to take jazz, ballet, and tap dancing, but, before that, it was just social.”-Miles Teller

“I don’t know if there’s an actors’ slow-pitch softball league I could join. My agency has a team, but they say it would be a conflict of interest for the people they rep to play because I could hit a pop-up and they’d have to drop it on purpose.”-Miles Teller

“Footloose’ is a fun movie. If you do it right, people should leave wanting to dance.”-Miles Teller

“Maybe it’s because I came from a small town, but I always did well for myself.”-Miles Teller

“It’s hard to get to the right position, to be somebody who is commercially successful and critically acclaimed. That’s the sweet spot.”-Miles Teller

“I still think you shouldn’t use acting as therapy.”-Miles Teller

“Reed Richards in ‘Fantastic Four,’ to me, was a huge character departure from, like, ‘That Awkward Moment’ or anything that I’d just done before that.”-Miles Teller

“I was raised middle-class in a small town. I have my same friends from high school. I’m close to my family. I’m dating a normal girl. So I want to feel people think I’m a man of the people. Because I feel that way.”-Miles Teller

“I absolutely do care what people think about me.”-Miles Teller

“I can’t put much weight into whether the public likes me because the more important thing is that, as an actor, I can truly say that there’s not a single director or actor who I’ve worked with who’d have a bad thing to say about me.”-Miles Teller

“People would probably say my mom raised very confident children, but it comes from a place of being comfortable in your own skin.”-Miles Teller

“Respect the person you’re with. My philosophy is, if I’m not happier when I’m with you, then there’s no reason for me to be with you. I’m happy on my own.”-Miles Teller

“Maybe some people have been turned off of me because I take what I’m doing pretty seriously, and I don’t feel the need to charm everybody.”-Miles Teller

“The only thing fame has changed about me is that I’m more self-aware when I go out in public.”-Miles Teller

“It’s important to have your own voice.”-Miles Teller

“An anonymous person, which is 99 percent of the people on Twitter, can say my face looks like a foot or I’m Ted Cruz’s doppelganger. That doesn’t affect me.”-Miles Teller

“I’ve been told that having an Instagram account will help me book more roles, get more endorsement deals. It makes you more of a brand. But I’m not interested. I want to build my fan base through movies and movies alone.”-Miles Teller