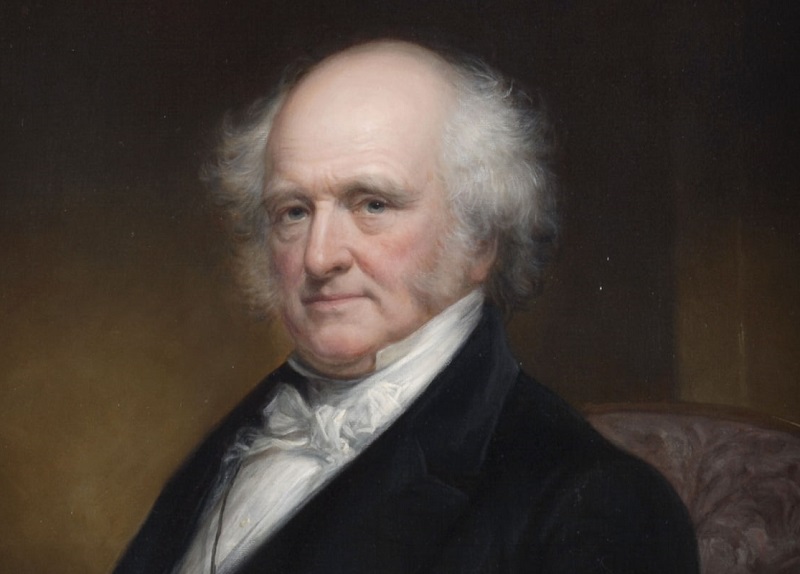 Martin Van Buren Quotes:- Martin Van Buren (December 5, 1782 – July 24, 1862) was the eighth president of the United States from 1837 to 1841. A founder of the Democratic Party, he previously served as the ninth governor of New York, the tenth U.S. secretary of state, and the eighth vice president of the United States. He won the 1836 presidential election with the endorsement of popular outgoing President Andrew Jackson and the organizational strength of the Democratic Party.


Van Buren was born in Kinderhook, New York to a family of Dutch Americans; his father was a Patriot during the American Revolution. He was raised speaking Dutch and learned English at school, making him the only U.S. President who spoke English as a second language.

“As to the presidency, the two happiest days of my life were those of my entrance upon the office and my surrender of it.”–Martin Van Buren

“Banks properly established and conducted are highly useful to the business of the country, and will doubtless continue to exist in the States so long as they conform to their laws and are found to be safe and beneficial.”-Martin Van Buren

“Between Russia and the United States sentiments of goodwill continue to be mutually cherished.”-Martin Van Buren

“Every proper exertion has been made and will be continued to carry out the wishes of Congress in relation to the tobacco trade, as indicated in the several resolutions of the House of Representatives and the legislation of the two branches.”-Martin Van Buren

“For myself, therefore, I desire to declare that the principle that will govern me in the high duty to which my country calls me is a strict adherence to the letter and spirit of the Constitution as it was designed by those who framed it.”-Martin Van Buren


“I tread in the footsteps of illustrious men… in receiving from the people the sacred trust confided to my illustrious predecessor.”-Martin Van Buren

“If laws acting upon private interests can not always be avoided, they should be confined within the narrowest limits, and left wherever possible to the legislatures of the States.”-Martin Van Buren

“In a government whose distinguishing characteristic should be a diffusion and equalization of its benefits and burdens the advantage of individuals will be augmented at the expense of the community at large.”-Martin Van Buren

“It affords me sincere pleasure to be able to apprise you of the entire removal of the Cherokee Nation of Indians to their new homes west of the Mississippi.”-Martin Van Buren

“It seems proper, at all events, that by an early enactment similar to that of other countries the application of public money by an officer of Government to private uses should be made a felony and visited with severe and ignominious punishment.”-Martin Van Buren

“Mutual forbearance and reciprocal concessions: thro’ their agency the Union was established – the patriotic spirit from which they emanated will forever sustain it.”-Martin Van Buren

“My conviction of the necessity of further legislative provisions for the safe-keeping and disbursement of the public money and my opinion in regard to the measures best adapted to the accomplishment of those objects have been already submitted to you.”-Martin Van Buren

“No evil can result from its inhibition more pernicious than its toleration.”-Martin Van Buren

“On receiving from the people the sacred trust twice confided on my illustrious predecessor, and which he has discharged so faithfully and so well, I know that I can not expect to perform the arduous task with equal ability and success.”-Martin Van Buren

“Our country presents on every side the evidence of that continued favor under whose auspices it, has gradually risen from a few feeble and dependent colonies to a prosperous and powerful confederacy.”-Martin Van Buren

“The case of the Seminoles constitutes at present the only exception to the successful efforts of the Government to remove the Indians to the homes assigned them west of the Mississippi.”-Martin Van Buren

“The condition of the tribes which occupy the country set apart for them in the West is highly prosperous and encourages the hope of their early civilization. They have for the most part abandoned the hunter state and turned their attention to agricultural pursuits.”-Martin Van Buren

“The connection which formerly existed between the Government and banks was, in reality, injurious to both, as well as to the general interests of the community at large.”-Martin Van Buren

“The government should not be guided by Temporary Excitement, but by Sober Second Thought.”-Martin Van Buren

“The law increasing and organizing the military establishment of the United States has been nearly carried into effect, and the Army has been extensively and usefully employed during the past season.”-Martin Van Buren

“The national will is the supreme law of the Republic, and on all subjects within the limits of his constitutional powers should be faithfully obeyed by the public servant.”-Martin Van Buren

“The people under our system, like the king in a monarchy, never die.”-Martin Van Buren

“The United States have fulfilled in good faith all their treaty stipulations with the Indian tribes, and have in every other instance insisted upon a like performance of their obligations.”-Martin Van Buren

“There is a power in public opinion in this country – and I thank God for it: for it is the most honest and best of all powers – which will not tolerate an incompetent or unworthy man to hold in his weak or wicked hands the lives and fortunes of his fellow-citizens.”-Martin Van Buren

“Those who have wrought great changes in the world never succeeded by gaining over chiefs, but always by exciting the multitude. The first is the resource of intrigue and produces only secondary results, the second is the resort of genius and transforms the universe.”-Martin Van Buren

“We remain at peace with all nations, and no efforts on my part consistent with the preservation of our rights and the honor of the country shall be spared to maintain a position so consonant to our institutions.”-Martin Van Buren

“With European powers, no new subjects of difficulty have arisen, and those which were under discussion, although not terminated, do not present a more unfavorable aspect for the future preservation of that good understanding which it has ever been our desire to cultivate.”-Martin Van Buren

“With respect to the northeastern boundary of the United States, no official correspondence between this Government and that of Great Britain has passed since that communicated to Congress toward the close of their last session.”-Martin Van Buren