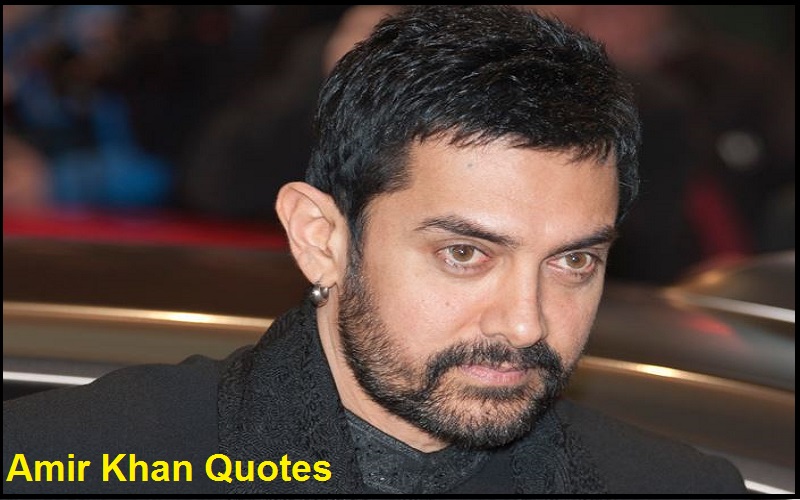 Aamir Khan Quotes:- Aamir Khan (born 14 March 1965) is an Indian actor, director, filmmaker, and television talk-show host. Through his career spanning over thirty years in Hindi films, Khan has established himself as one of the most popular and influential actors of Indian cinema.

He has a large global following, especially in Southern Asia and Greater China, and has been described by Newsweek as “the biggest movie star” in the world. Khan is the recipient of numerous awards, including nine Filmfare Awards, four National Film Awards, and an AACTA Award, as well as an Academy Award nomination.

“Creative people have no barriers. Ultimately, it’s connecting with human beings. There’s just one planet. I don’t see it as different countries.”-Aamir Khan 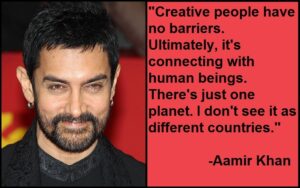 “Many people, including me, thought it was too early for me to play a father to two grown-up daughters, but I found the script of ‘Dangal’ irresistible. I had to do it!”-Aamir Khan

“I am not a perfectionist. Perfection doesn’t exist in real life. It’s the wrong title for me.”-Aamir Khan

“Essentially, it is the director who is the creative head of a film. The final authority on all decisions lies with the director. That is how it should be. And then other team members can give their creative inputs.”-Aamir Khan

“I do what I feel is right. I am not scared to walk on the new path and take the risk.”-Aamir Khan

“The journey that I have undertaken, meeting people from all walks of life and learning from them, has been my biggest achievement.”-Aamir Khan

“I have had unsuccessful films, but I learned a lot from those films. I give my failures as much importance as my success.”-Aamir Khan

“I don’t believe in strategies. I love what I am doing; that’s the main thing.”-Aamir Khan

“When I was new, I didn’t know where my career will go. Initially, my films were not even successful, but then I learned a lot from my mistakes.”-Aamir Khan

“There must be a story within him/her that wants to come out. That’s the reason why ‘Dil Chahta Hai,’ ‘Lagaan,’ and ‘Rang De Basanti’ worked so well: Ashutosh, Farhan, and Rakesh had a story inside them. It’s very important that the director should have the fire in the belly to tell the story.”-Aamir Khan

“I don’t see myself as an activist. I understand that people, with me doing ‘Satyameva Jayate,’ for example, they will feel that I’m being an activist, but I’m not. Actually, I’m not, because I think an activist, as I see it, as a person who is very, very – takes up one issue and remains with that one issue for his entire life. I’m not doing that.”-Aamir Khan

“The journey that I have undertaken, meeting people from all walks of life and learning from them, has been my biggest achievement.”-Aamir Khan

“I feel that, in India, we have films that have tackled various issues over the years, but perhaps one of the issues that we’ve tackled less is the issue of caste-ism. That’s an issue we’ve more or less stayed away from… although we touched on it briefly in some films like ‘Lagaan.'”-Aamir Khan

“For me, acting is not a job. It is something I love. I don’t do these things for awards or rewards. I do them because I love challenges.”-Aamir Khan

“When I am shooting a film, then everything goes soft focus. My family also complains that I don’t give them time.”-Aamir Khan

“My films are so new and unique that I don’t know where I will end up. Fear keeps me alert. And it’s also a part of the excitement.”-Aamir Khan

“When I prepare for a role, I try to get inside the character’s head and understand him.”-Aamir Khan

“As an actor, the best way I can hope to promote greater social understanding is through my work. If I can communicate with people and touch their hearts through ‘Dangal,’ perhaps, eventually, I can help change their minds.”-Aamir Khan