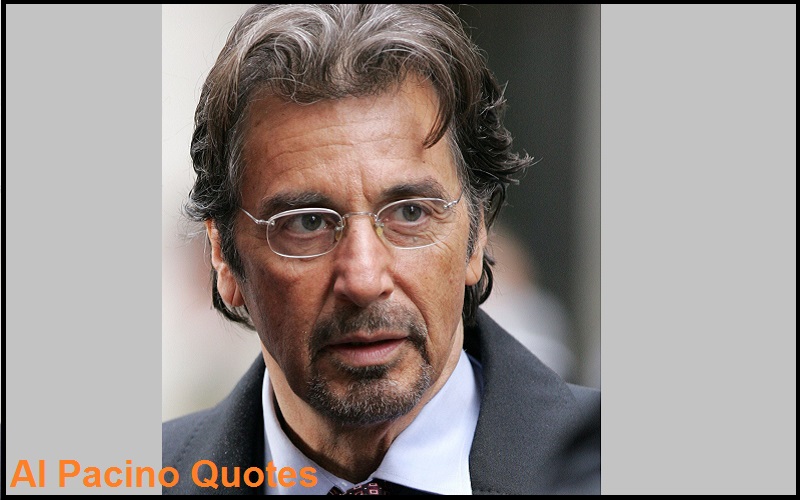 Share Tweet Pin it Email WhatsApp
Al Pacino Quotes:- Alfredo James Pacino (born April 25, 1940), known professionally as Al Pacino, is an American actor and filmmaker who has had a career spanning more than five decades.
He has received numerous accolades and honors both competitive and honorary, among them an Academy Award, two Tony Awards, two Primetime Emmy Awards, a British Academy Film Award, four Golden Globe Awards, the Lifetime Achievement Award from the American Film Institute, the Golden Globe Cecil B. DeMille Award and the National Medal of Arts.

“My weaknesses… I wish I could come up with something. I’d probably have the same pause if you asked me what my strengths are. Maybe they’re the same thing.”-Al Pacino 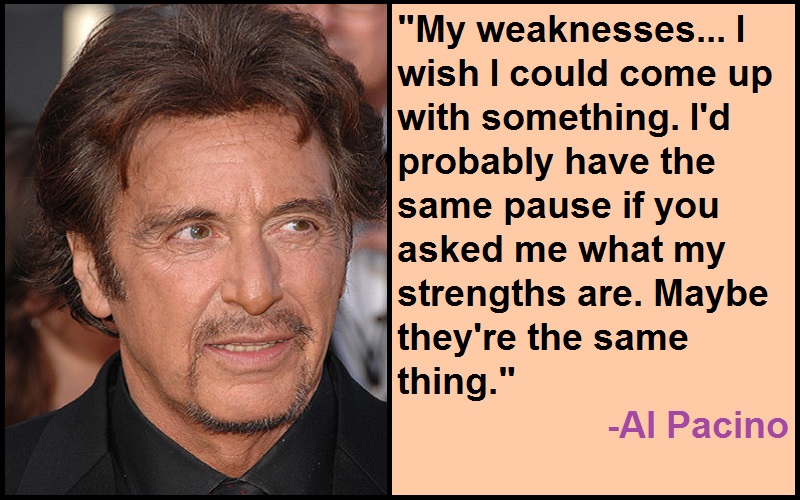 “The hardest thing about being famous is that people are always nice to you. You’re in a conversation and everybody’s agreeing with what you’re saying – even if you say something totally crazy. You need people who can tell you what you don’t want to hear.”-Al Pacino

“My first language was shy. It’s only by having been thrust into the limelight that I have learned to cope with my shyness.”-Al Pacino

“Vanity is my favorite sin.”-Al Pacino

“The problem with me is, I guess, the way I express myself, you have to be with me 50 years before you can get a sense of what I’m talking about.”-Al Pacino 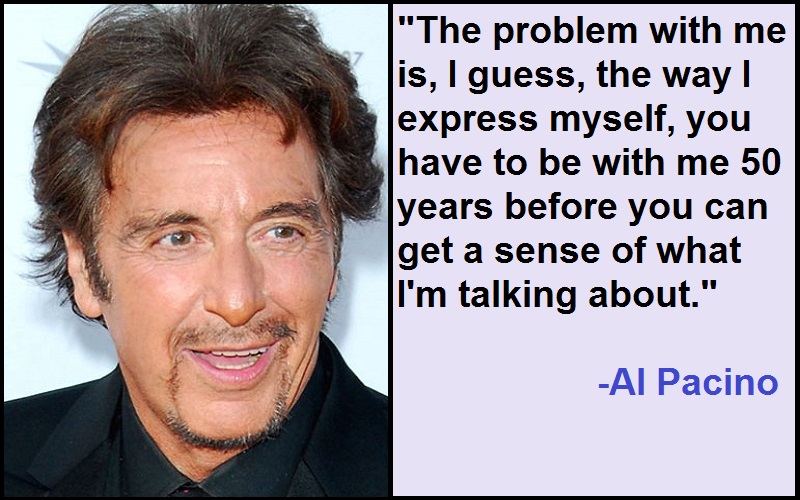 “There has been a lot of self-doubt and unwelcome events in my life.”-Al Pacino

“You do get very tired sometimes when you’re sitting around for hours in movies. You get depleted.”-Al Pacino

“The actor becomes an emotional athlete. The process is painful – my personal life suffers.”-Al Pacino

“I don’t need bodyguards. I’m from the South Bronx.”-Al Pacino

“I’ve often said there are two kinds of actors. There’s a more gregarious type and the shy type.”-Al Pacino

“In America, most everybody who’s Italian is half Italian. Except me. I’m all Italian. I’m mostly Sicilian, and I have a little bit of Neapolitan in me. You get your full dose with me.”-Al Pacino

“I’m an actor, not a star. Stars are people who live in Hollywood and have heart-shaped swimming pools.”-Al Pacino

“Did you know I started out as a stand-up comic? People don’t believe me when I tell them. That’s how I saw myself, in comedy.”-Al Pacino

“I used to wear disguises, like hats and false beards, just to walk around and avoid attention.”-Al Pacino

“It’s never really that much fun for me to do movies anyway because you – you know, you have to get up very early in the morning and you have to go in and you spend a lot of time waiting around.”-Al Pacino

“Playing a character is an illusion, and I feel that when you know too much about a person, possibly part of that illusion is disrupted.”-Al Pacino

“All due respect and trying to be as modest as I can be, I am a dancer. But I don’t think I would be on ‘Dancing with the Stars,’ mainly because I would be too shy.”-Al Pacino

“It surprised me, the feeling I got when I won the Oscar for ‘Scent of a Woman.’ It was a new feeling. I’d never felt it. I don’t see my Oscar much now. But when I first got it, there was a feeling for weeks afterward that I guess is akin to winning a gold medal in the Olympics.”-Al Pacino

“There are a lot of roles in Shakespeare, basically. If I feel that the script is a movie, I would be interested in doing any role of Shakespeare’s.”-Al Pacino

“I remember acting in a school play about the melting pot when I was very little. There was a great big pot onstage. On the other side of the pot was a little girl who had dark hair, and she and I were representing the Italians. And I thought: Is that what an Italian looked like?”-Al Pacino

“Francis Ford Coppola did this early on. You tape a movie, like a radio show, and you have the narrator read all the stage directions. And then you go back like a few days later and then you listen to the movie. And it sort of plays in your mind like a film, like a first rough cut of a movie.”-Al Pacino

“Doing Shakespeare once is not fair to the play. I have been in Shakespeare plays when it’s not until the last two or three performances when I even understand certain things. In the old days, star actors would travel the world doing the same parts over and over again.”-Al Pacino

“My grandmother always came to my shows. She was always concerned about the way I dressed – even later on when I was well known and I supported her.”-Al Pacino

“It would be hard to play a character you don’t like – for me anyway – or can’t find something in them to like.”-Al Pacino

“When I was a younger actor, I would try to keep it serious all day. But I have found, later on, that the lighter I am about things when I’m going to do a big scene that’s dramatic and takes a lot out of you, the better off I am when I come to it.”-Al Pacino

“At this point in my career, I don’t have to deal with audition rejections. So I get my rejection from other things. My children can make me feel rejected. They can humble you pretty quick.”-Al Pacino