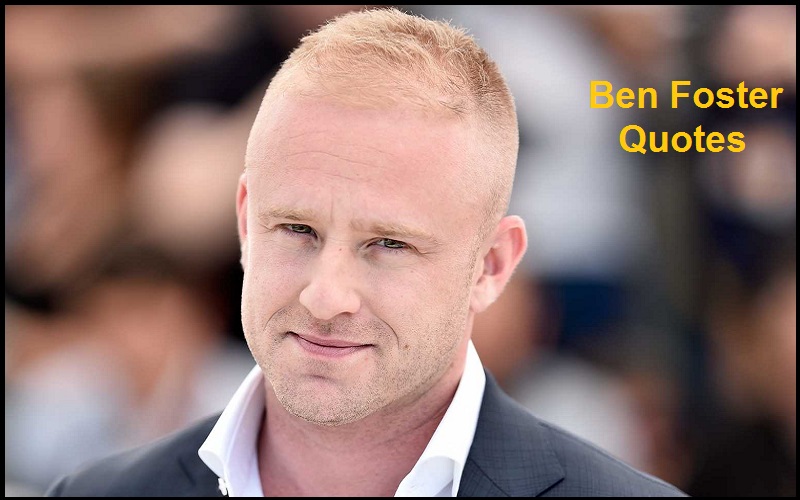 Ben Foster Quotes:- Ben Foster (born October 29, 1980) is an American actor. He has had roles in films including The Punisher, X-Men: The Last Stand, Alpha Dog, The Messenger, Pandorum, The Mechanic, Contraband, Kill Your Darlings, Lone Survivor, The Program, and Leave No Trace.

He was nominated for a Saturn Award and a Satellite Award for his role in 3:10 to Yuma and won an Independent Spirit Award for portraying Tanner Howard in Hell or High Water.

“My heroes were always Looney Toons, Robin Williams, the Three Stooges. I think everything I do is kinda funny. I think I’m sort of ridiculous.”-Ben Foster 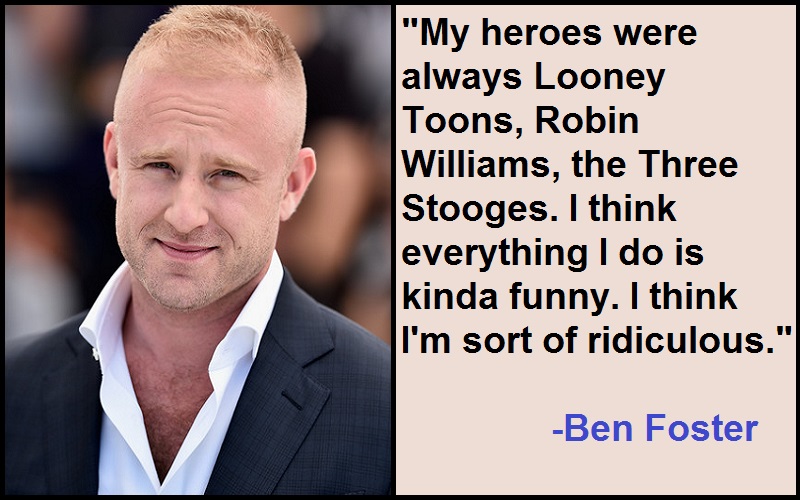 “I’m not going to beat this life. It’s gonna get me in the end. So accepting that is real freedom and finding a joy in working that I haven’t allowed myself before.”–Ben Foster

“I’m so sick of sarcasm and irony, I could kill! Sincerely, the real root of things is love and sacrifice.”-Ben Foster

“The heat around young actors burns out. Natural ability and magnetism only get you so far. The rest is hard work.”-Ben Foster

“We live in this thought web; we identify things and put them away and distance ourselves from them. But to be completely present? That is the source, that is art, that is spirituality. And meditation is a way to defy fear and experience that source.”-Ben Foster

“I don’t like to rehearse, and the film-makers that I have been drawn to are interested in provoking something between people rather than nailing a scene in advance.”-Ben Foster

“The roles I’m interested in or have been interested in, you know, it’s going to get down to conflict. Drama is conflict – conflict of interests.”-Ben Foster

“I have a lot of respect for, always dig, the crew. Sometimes a lot more than the cast. But a good run production team is paramount to making a good film. You just can’t it has done without a good line producer, without creative producers, without people who are making stuff happen.”-Ben Foster

“I’m learning not to hold on so tightly to my solitude. It’s not an economical way to work. A driver would call it ‘white-knuckling.’ If you’re holding on to the wheel so tightly, it’s gonna lock up your driving. Releasing myself from trying to control everything has been part of growing up.”-Ben Foster

“Usually, I’ll drop twenty to forty percent of the dialogue – you can do so much with the gesture. I’m still waiting to do a silent film.”-Ben Foster

“People tell me I look angry. I thought my dad was mad at me his whole life, but it turns out that was just his mug – and I inherited it.”-Ben Foster

“I don’t watch most of the movies I’m in. Ever. They’re like a bad relationship where, after you break up, you don’t want to look over all the valentines.”-Ben Foster

“I don’t think I’m particularly shy. I just don’t like being front and center as myself.”-Ben Foster

“A Streetcar Named Desire’ is one of the best, if not the best, modern American plays. It deals with family dynamics, mental health, PTSD, war, and love. It’s hard to beat.”-Ben Foster

“I think a long-term TV show is probably not for me, but doing a few years of something could be interesting.”-Ben Foster

“Once you’re in the presence of people who have put their lives actively on the line, repeatedly, you’re never allowed to complain again. And I do, and we all do. But now I look at things a little differently.”-Ben Foster

“There’s a lot to learn from the family of a soldier as much as the soldier. Actually, ‘warrior’ is a better word.”-Ben Foster

“My job is all about defending the people that I play.”-Ben Foster

“I would come home from school every Wednesday, order pizza, and watch ‘X-Files.’ I was devoted.”-Ben Foster

“We’ve all been influenced by American naturalism, and to ignore that entirely would be impossible for me as someone who works primarily in film.”-Ben Foster

“We’ve turned the film into such an industry that we pursue naturalism just by shaking the camera and cutting the film to ribbons to provoke a bogus sense of documentary. But we haven’t done the homework. To push the depth that the Actor’s Studio did or the Russian theatres did with their actors is to rehearse, to spend time, to dig, to excavate.”-Ben Foster