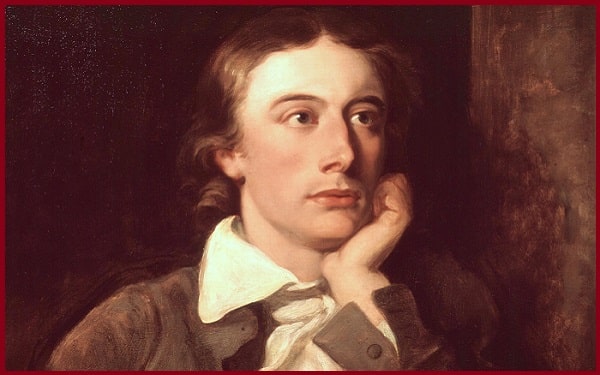 John Keats Quotes:- John Keats (31 October 1795 – 23 February 1821) was an English Romantic poet. He was one of the main figures of the second generation of Romantic poets, along with Lord Byron and Percy Bysshe Shelley, despite his works having been in publication for only four years before his death from tuberculosis at the age of 25.

“Praise or blame has but a momentary effect on the man whose love of beauty in the abstract makes him a severe critic on his own works.”-John Keats 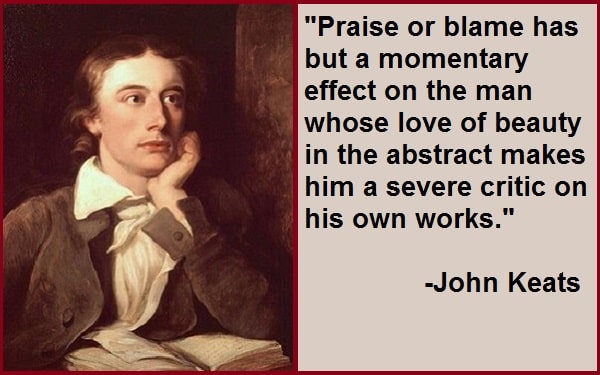 “Do you not see how necessary a world of pains and troubles is to school an intelligence and make it a soul?”-John Keats

“The poetry of the earth is never dead.”-John Keats

“Poetry should… should strike the reader as a wording of his own highest thoughts and appear almost a remembrance.”-John Keats

“A thing of beauty is a joy forever: its loveliness increases; it will never Pass into nothingness.”-John Keats

“Scenery is fine – but human nature is finer.”-John Keats

“Heard melodies are sweet, but those unheard are sweeter.”-John Keats

“He ne’er is crowned with immortality Who fears to follow where airy voices lead.”-John Keats

“Love is my religion – I could die for it.”-John Keats

“There is nothing stable in the world; uproar’s your only music.”-John Keats

“Nothing ever becomes real till it is experienced.”-John Keats

“I am certain of nothing but the holiness of the heart’s affections, and the truth of imagination.”-John Keats

“There is an electric fire in human nature tending to purify – so that among these human creatures there is continually some birth of new heroism. The pity is that we must wonder at it, as we should at finding a pearl in rubbish.”-John Keats

“My imagination is a monastery and I am its monk.”-John Keats

“Land and sea, weakness and decline are great separators, but death is the great divorcer for ever.”-John Keats

“I am in that temper that if I were underwater I would scarcely kick to come to the top.”-John Keats

“I would sooner fail than not be among the greatest.”-John Keats

“‘ Beauty is truth, truth beauty,’ – that is all ye know on earth, and all ye need to know.”-John Keats

“Now a soft kiss – Aye, by that kiss, I vow an endless bliss.”-John Keats

“What the imagination seizes as beauty must be the truth.”-John Keats

“Here lies one whose name was writ in water.”-John Keats

“You are always new, the last of your kisses was ever the sweetest.”-John Keats

“The excellency of every art is its intensity, capable of making all disagreeable evaporate.”-John Keats

“I love you the more in that I believe you had liked me for my own sake and for nothing else.”-John Keats

“With a great poet, the sense of Beauty overcomes every other consideration or rather obliterates all consideration.”-John Keats

“There is not a fiercer hell than the failure in a great object.”-John Keats

“I have two luxuries to brood over in my walks, your loveliness and the hour of my death. O that I could have possession of them both in the same minute.”-John Keats

“Though a quarrel in the streets is a thing to be hated, the energies displayed in it are fine; the commonest man shows a grace in his quarrel.”-John Keats

“I will give you a definition of a proud man: he is a man who has neither vanity nor wisdom one filled with hatreds cannot be vain, neither can he be wise.”-John Keats

“You speak of Lord Byron and me; there is this great difference between us. He describes what he sees I describe what I imagine. Mine is the hardest task.”-John Keats

“The Public – a thing I cannot help looking upon as an enemy, and which I cannot address without feelings of hostility.”-John Keats

“Poetry should surprise by a fine excess and not by singularity, it should strike the reader as a wording of his own highest thoughts, and appear almost a remembrance.”-John Keats

“Poetry should be great and unobtrusive, a thing which enters into one’s soul, and does not startle it or amaze it with itself, but with its subject.”-John Keats

“The only means of strengthening one’s intellect is to make up one’s mind about nothing, to let the mind be a thoroughfare for all thoughts.”-John Keats