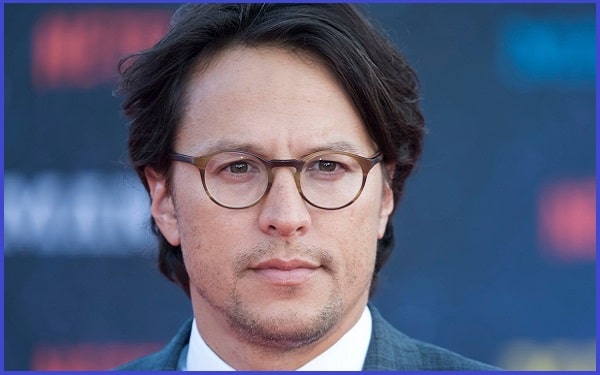 Cary Fukunaga Quotes:- Cary Fukunaga (born July 10, 1977) is an American filmmaker and television director. He first gained recognition for writing and directing the 2009 film Sin Nombre, and the 2011 adaptation of Jane Eyre; he also was the director and executive producer of the first season of the HBO series True Detective, for which he won the Primetime Emmy Award for Outstanding Directing for a Drama Series.

“The anticipation-speculation that comes with a weekly schedule is a double-edged sword. Because people have more time to talk about things, some crazy ideas get a lot of attention.”-Cary Fukunaga 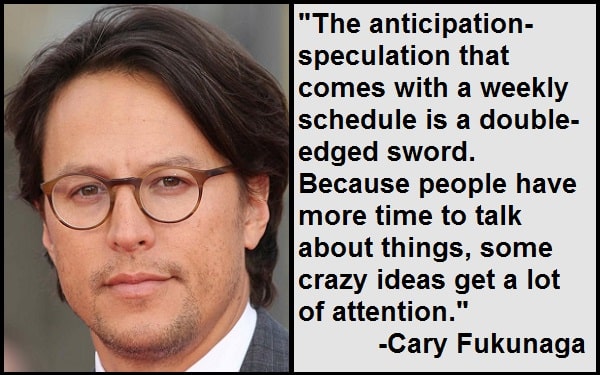 “My mom was married to a Mexican guy – a surfer – and so we’d kind of camp out on the beach the swell season.”-Cary Fukunaga

“I think the semantics of mini-series for a network is that it has an end.”-Cary Fukunaga

“After ‘Sin Nombre,’ I just needed to take a break to go to completely different worlds.”-Cary Fukunaga

“My dad worked for a generator company and then UC Berkeley, and my mom was as a dental hygienist and then eventually a history teacher. My uncles and aunts, all of them are elementary school teachers or scientists.”-Cary Fukunaga

“In TV, you have no time and sort of just carpet bomb the scene with as many angles as possible as quickly as possible and find it in the edit.”-Cary Fukunaga

“The theoretical casting part of movies is the funniest part. You really can imagine so many different versions of a story based on who’s embodying it.”-Cary Fukunaga

“Tom Hooper had done ‘John Adams,’ and David Lynch did ‘Twin Peaks.’ I figured I could do eight hours of television, and I wanted to.”-Cary Fukunaga

“There’s a lot of two-hander dialogue in ‘True Detective,’ and I needed to place those guys in locations where there were other levels of visual storytelling. It didn’t necessarily have to move the plot forward, but it had to add tone or add to the overall feeling.”-Cary Fukunaga

“My grandma was really sick when I was working on ‘Sin Nombre’ and eventually died that summer when we were finishing the film. But I was able to bring an unfinished version of the film for her to watch.”-Cary Fukunaga

“If you’re directing, it doesn’t really matter anymore if it’s going straight to the TV – what matters is whether you have the resources to make a story that moves you.”-Cary Fukunaga

“Increasingly, there’s much better material on television, but there’s not always the time and money to make it, so you’ve got to make sure you make it in the right place. It also depends on time commitment; a lot of directors will make a pilot, but a series is just a whole other level of involvement.”-Cary Fukunaga

“My friends just make fun of me in some shape or form.”-Cary Fukunaga

“With ‘Sin Nombre,’ there are parts that I wish were longer. And with ‘Jane Eyre’ especially, there were parts that I had to compress that I thought it would have been really nice to spend more time with – to spend with the characters.”-Cary Fukunaga

“Collaborations aren’t easy, but you definitely get something highly different than had you done it on your own. That’s part of the experience.”-Cary Fukunaga

“New York is perfect for Tanizaki because it’s filled with so many dark spaces.”-Cary Fukunaga

“In a city like New York, especially for young professionals who aren’t in a family situation, most people don’t cook for themselves. This is the only city I’ve ever lived in where I eat out every night.”-Cary Fukunaga

“No, ramen’s not good for you. But in Japan, our favorite thing to do after drinking all night, especially in Sapporo where it’s freezing cold, is to go to the ramen place at two, three in the morning.”-Cary Fukunaga

“Some directors don’t get involved in the cinematography and are just about story, but I’m definitely more tactile than that in terms of my involvement in the minutiae.”-Cary Fukunaga

“I enjoy setting the scene and coming up with interesting frames. ‘True Detective’ was a very hands-on set.”-Cary Fukunaga

“It’s easy to make something avant-garde. To do something in the traditional way is much braver in the sense that you’re – your technique is so much more exposed because there’s not all this flashy stuff to distract the viewer.”-Cary Fukunaga

“Every single substitute teacher growing up could not pronounce my name, so whenever someone pauses, I’m like, ‘Oh, that’s me.'”-Cary Fukunaga

“I don’t really put trophies out. I don’t keep trophies around my apartment.”-Cary Fukunaga

“It’s hard because there’s a part of me that wants ‘True Detective’ to win every award we’re nominated for. But I’m a huge fan of ‘Breaking Bad’ and ‘Game of Thrones.'”-Cary Fukunaga

“To do action without cuts is infinitely more exciting.”-Cary Fukunaga

“It’s so easy for shows to be gritty and handheld and shaky and really tight in people’s faces.”-Cary Fukunaga

“I’m better suited to be a director, I think. I see myself as a general author. I hate the word ‘auteur,’ because it sounds so solitary when filmmaking is anything but solitary.”-Cary Fukunaga

“I’m never more miserable than when I write, and never more happy than having finished and having it sitting in front of me.”-Cary Fukunaga

“I binge write, basically. I do a lot of prep, research, setup. I’ll have a pretty detailed outline. Sort of like a beat outline. And then I’ll add little notes and dialogue ideas, and I’ll just create a 20-page document.”-Cary Fukunaga

“I eventually want to do writing on all the films, but not necessarily to be the writer. Writing is a painful, painful thing; it really is.”-Cary Fukunaga

“I’ll definitely say that, before film school, I didn’t have much of a film-history background. I didn’t know much about classic cinema.”-Cary Fukunaga

“Literally, I don’t have a television. So I don’t really know what’s happening pop-culturally. I read the ‘New York Times.’ And there’s one worldwide cabin blog that I look at.”-Cary Fukunaga

“I want to have a nice country home one day, yeah.”-Cary Fukunaga

“I’m definitely sensitive to the idea of exploitation. You don’t want to glamorize certain things.”-Cary Fukunaga

“I don’t believe happiness comes out of material gain, for sure.”-Cary Fukunaga

“I’ve certainly never been dying to go to England my entire life.”-Cary Fukunaga

“Shakespeare is repeated around the world in different languages, just because it’s good storytelling.”-Cary Fukunaga

“I like characters that make choices and try to drive their own fate.”-Cary Fukunaga

“There are elements to the 19th century which just don’t work for contemporary audiences.”-Cary Fukunaga

“I have a really good relationship with Focus Features; we had a wonderful time working together on ‘Sin Nombre.'”-Cary Fukunaga