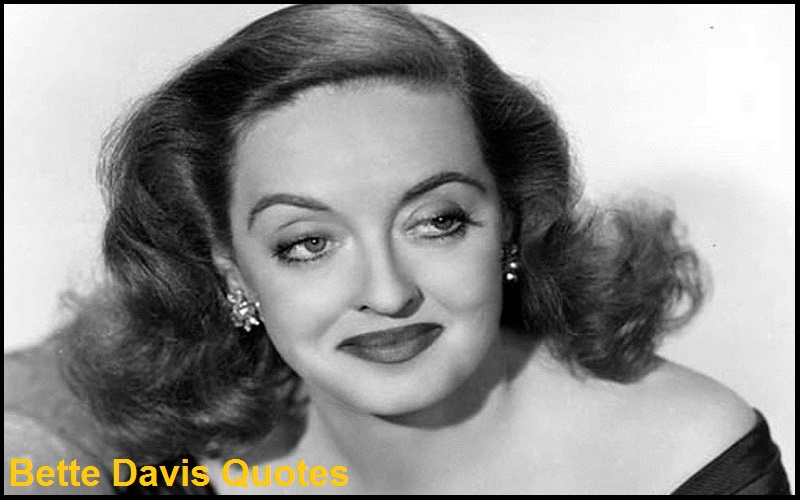 Bette Davis Quotes:- Bette Davis (April 5, 1908 – October 6, 1989) was an American actress of film, television, and theater. With a career spanning 60 years, she is regarded as one of the greatest actresses in Hollywood history.

She was noted for playing unsympathetic, sardonic characters, and was famous for her performances in a range of film genres, from contemporary crime melodramas to historical and period films, suspense horror, and occasional comedies, although her greatest successes were her roles in romantic dramas.

“My passions were all gathered together like fingers that made a fist. Drive is considered aggression today; I knew it then as purpose.”-Bette Davis 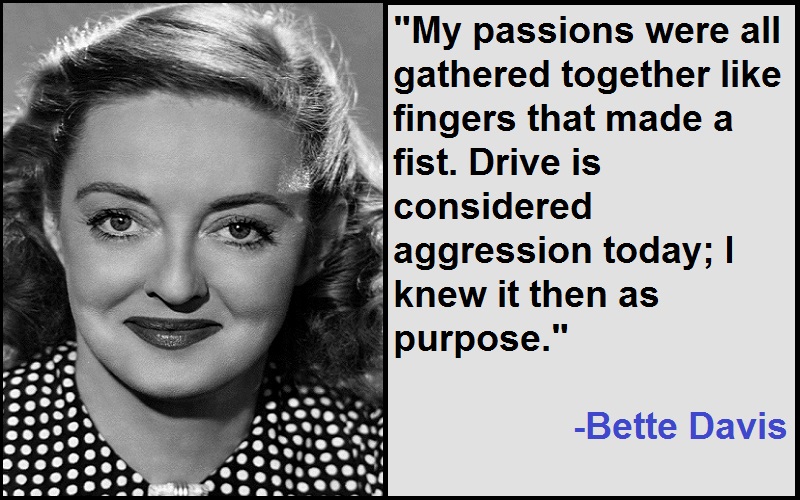 “This has always been a motto of mine: Attempt the impossible in order to improve your work.”-Bette Davis

“I will not retire while I’ve still got my legs and my make-up box.”-Bette Davis

“To fulfill a dream, to be allowed to sweat over lonely labor, to be given a chance to create, is the meat and potatoes of life. The money is the gravy.”-Bette Davis

“The key to life is accepting challenges. Once someone stops doing this, he’s dead.”-Bette Davis

“Old age is no place for sissies.”-Bette Davis

“People often become actresses because of something they dislike about themselves: They pretend they are someone else.”-Bette Davis

“I’d marry again if I found a man who had fifteen million dollars, would sign over half to me, and guarantee that he’d be dead within a year.”-Bette Davis

“I survived because I was tougher than anybody else.”-Bette Davis

“That’s me: an old kazoo with some sparklers.”-Bette Davis

“I went back to work because someone had to pay for the groceries.”-Bette Davis

“A sure way to lose happiness, I found, is to want it at the expense of everything else.”-Bette Davis

“Wave after wave of love flooded the stage and washed over me, the beginning of the one great durable romance of my life.”-Bette Davis

“The best time I ever had with Joan Crawford was when I pushed her down the stairs in Whatever Happened to Baby Jane?”-Bette Davis

“Men become much more attractive when they start looking older. But it doesn’t do much for women, though we do have an advantage: make-up.”-Bette Davis

“Attempt the impossible in order to improve your work.”-Bette Davis

“I am just too much.”-Bette Davis

“An affair now and then is good for a marriage. It adds spice, stops it from getting boring… I ought to know.”-Bette Davis

“Today everyone is a star – they’re all billed as ‘starring’ or ‘also starring’. In my day, we earned that recognition.”-Bette Davis

“I have often seen an actor laugh off the stage, but I don’t remember ever having seen one weep.”-Bette Davis

“Everybody has a heart. Except for some people.”-Bette Davis

“There are new words now that excuse everybody. Give me the good old days of heroes and villains, the people you can bravo or hiss. There was a truth to them that all the slick credulity of today cannot touch.”-Bette Davis

“Hollywood always wanted me to be pretty, but I fought for realism.”-Bette Davis

“I work to stay alive.”-Bette Davis

“In this rat-race everybody’s guilty till proved innocent!”-Bette Davis

“With the newspaper strike on, I wouldn’t consider dying.”-Bette Davis

“I sent my flowers across the hall to Mrs. Nixon but her husband remembered what a Democrat I am and sent them back.”-Bette Davis

“Psychoanalysis. Almost went three times – almost. Then I decided what was peculiar about me was probably what made me successful. I’ve seen some very talented actors go into analysis and really lose it.”-Bette Davis

“I’d Luv to kiss ya, but I just washed my hair.”-Bette Davis

“Without wonder and insight, acting is just a trade. With it, it becomes a creation.”-Bette Davis

“From the moment I was six, I felt sexy. And let me tell you it was hell, sheer hell, waiting to do something about it.”-Bette Davis

“Locations are all tough, all miserable. I never left the sound stage for 18 years at Warners. We never went outside the studio, not even for big scenes.”-Bette Davis

“The only reason anyone goes to Broadway is that they can’t get work in the movies.”-Bette Davis

“I am doomed to an eternity of compulsive work. No set goal achieved satisfies. Success only breeds a new goal. The golden apple devoured has seeds. It is endless.”-Bette Davis

“It is my last wish to be buried sitting up.”-Bette Davis

“I don’t take the movies seriously, and anyone who does is in for a headache.”-Bette Davis

“I don’t think of myself as a character actress – that’s become a phrase which means you’ve had it.”-Bette Davis

“I was never very interested in boys – and there were plenty of them – vying with one another to see how many famous women they would get into the hay.”-Bette Davis

“Oh, don’t let’s ask for the moon. We’ve already got the stars.”-Bette Davis

“In this business, until you’re known as a monster you’re not a star.”-Bette Davis

“Brought up to respect the conventions, love had to end in marriage. I’m afraid it did.”-Bette Davis

“Life is a jest, and all things show it. I thought so once, but now I know it.”-Bette Davis