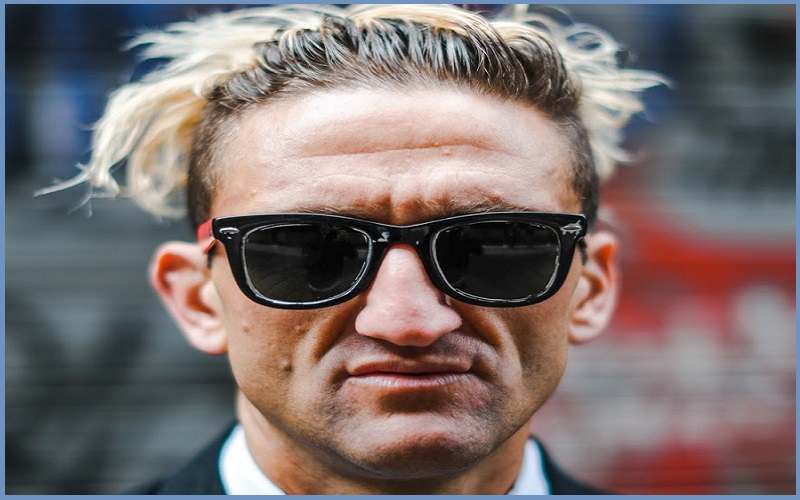 Casey Neistat Quotes:- Casey Neistat (born March 25, 1981) is an American YouTube personality, filmmaker, blogger, and co-founder of the multimedia company Beme, which was later acquired by CNN. In 2018, he founded 368, a creative space for creators to collaborate and influence each other.

Neistat was born into a Jewish family in Gales Ferry, Connecticut on March 25, 1981.
He dropped out of high school during his sophomore year at the age of 17 and did not return to school, nor graduate.

He eventually left his family and had a son named Owen, at age 17, with his then-girlfriend Robin Harris. Between the age of 17 and 20, he lived in a trailer park with Harris and his infant son. 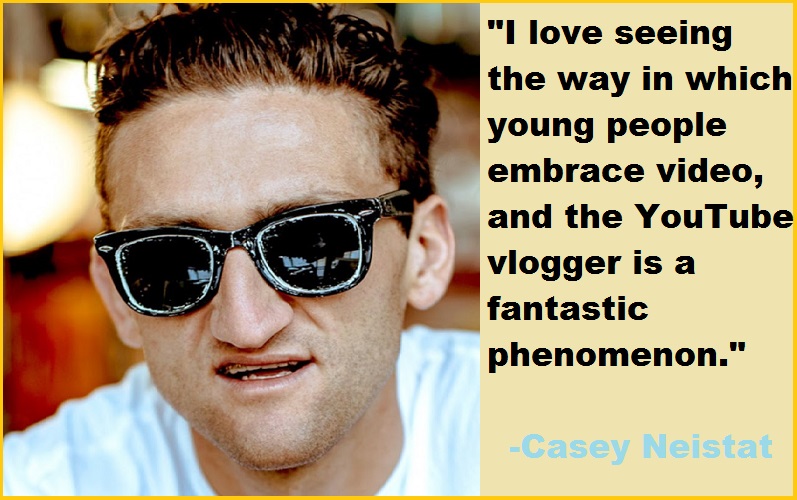 “I love seeing the way in which young people embrace video, and the YouTube vlogger is a fantastic phenomenon.”-Casey Neistat

“I don’t drink much soda; I don’t buy Big Gulps, and my body mass index is right where it should be.”-Casey Neistat

“If New Yorkers reduced portion size to 16 ounces from 20 ounces for one sugary drink every two weeks, it would collectively save approximately 2.3 million pounds over one year.”-Casey Neistat

“I am so disappointed in Apple. I don’t even use an iPhone anymore. Their marketing sucks. It’s embarrassing. It’s just garbage.”-Casey Neistat 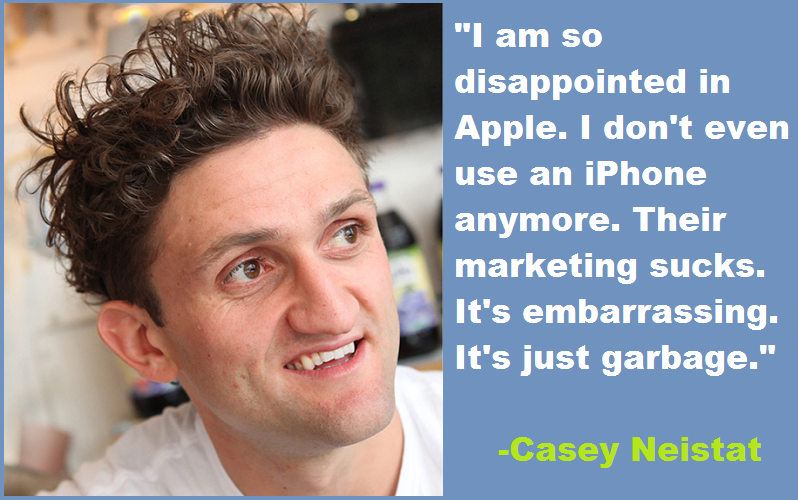 “I consider myself to be a very good skateboarder, but the difficulty when you’re being pulled behind any car when there’s only a 20-ft. the line is that you can’t see the potholes.”-Casey Neistat

“As a director, I have the greatest job in the world, but if I don’t push the boundaries, then what’s the point of having it?”-Casey Neistat

“I don’t keep an ongoing dribble of updates of my day, but I tell little-compartmentalized stories every day on Snapchat. I use it much more like making a movie than maintaining a diary. When people watch my 60-second clips, there’s a beginning, middle, and end.”-Casey Neistat

“I don’t know of a more noble, a bigger deal as a filmmaker than to be a YouTube filmmaker.”-Casey Neistat

“I don’t like to run, train, in groups. But racing, it’s the groups that are most inspiring to me. I love racing with 52,000 people. I don’t like training with any more than one person. Ever.”-Casey Neistat

“I don’t send and receive messages on Snapchat; I never have. Stories are the only feature I use. I think of them becoming a more dynamic social network, and I think it’s great.”-Casey Neistat

“Truth is so much more interesting than the fiction we’re used to.”-Casey Neistat

“I grew up in the Northeast; I’ve seen hurricanes before and trees down and cars destroyed.”-Casey Neistat

“I have 60-plus videos on YouTube and over 30 million views. Of those 60, only three or four are branded videos. I built that audience by telling stories the way I like to tell them.”-Casey Neistat

“Persistence and endurance will make you omnipotent.”-Casey Neistat

“I made a living for 10 years making very typical TV commercials. But I always wanted to reach beyond that and do stuff that people might relate to in the way they relate to my nonbranded content.”-Casey Neistat

“My brother Van got the computer first and showed me what it was like to edit video. I definitely credit Van with turning me onto filmmaking.”-Casey Neistat

“I think I’m like that nerdy dad from middle school who always has a video camera, but in the same respect, I only take it out during interesting occasions.”-Casey Neistat

“I think you should dress nicely for airports. You’re surrounded by people coming from all walks of life. You should look your best.”-Casey Neistat

“I use the iPod all the time, almost every day. It’s great.”-Casey Neistat

“I was always the guy who jumped off the roof of the garage, who could climb up the facade of a building.”-Casey Neistat

“I get, like, 50 emails a day from kids being like, ‘I want to go on this trip around the world. How do I get a sponsor?”-Casey Neistat

“I was raised on Nirvana and flannel shirts and Rage Against the Machine, and I sort of describe my youth as rebellious and always fighting the system.”-Casey Neistat

“Troubleshooting a wiring problem is a soul-killing experience.”-Casey Neistat

“If I’m in the stands at a U2 concert watching Bono, how can I capture this moment without interrupting it and making it fake?”-Casey Neistat

“If you type ‘Salt Flats’ into YouTube, you’ll find 100 amazing videos that were shot out there, but you won’t find any that were shot in the rain.”-Casey Neistat

Casey Neistat Quotes To Be Successful

“I’m not able to make amazingly perfect, precious pieces of content, but I get to make awesome spontaneous content that’s frequently ephemeral.”-Casey Neistat

“I’m not an exhibitionist; I don’t have a compulsion to share the ins and outs of my daily life with a public audience.”-Casey Neistat

“I’ve always been an incredibly physically capable human being. I’ve always had good control of my body, walk a hundred feet on my hands, jump off rock wall and do a backflip into the sand. That’s always been who I am.”-Casey Neistat

“One of my first questions when I interview prospective employees is, ‘Do you know how big a sheet of plywood is?’ Most people don’t and say they are different sizes, but it’s 4′ x 8′. Anyway, working with your hands is a very American thing that we kinda lost here, but it’s an important skill to have.”-Casey Neistat

“I moved to New York City when I was 20 years old, started making movies non-stop. I didn’t have any friends, so I would just sit at home all night editing on my iMac.”-Casey Neistat

“Pablo Picasso would paint a painting and hang it on the wall, and you would go and see the painting exactly how he wanted it to be made. But if you have an idea for a TV show, for example, you’re beholden to studios to produce it and distributors to distribute it.”-Casey Neistat

“I always thought of myself as an amateur stuntman.”-Casey Neistat

“So many car commercials are shot in the Salt Flats, and so much great imagery comes out of that place, but I’ve never been there, and I’m curious.”-Casey Neistat

“The idea that somebody would go to my YouTube channel and want to watch movies and then be subjected to some terrible car commercial – I don’t like that.”-Casey Neistat

“I washed the dishes so I could make movies. it was never a way for me to make money.”-Casey Neistat

“The reason why I’m sending my super-intellectual 12-year old kid to tech school is that I don’t believe he would succeed in this world unless he first learned to work with his hands.”-Casey Neistat

“I was in New York City for September 11th, and I was there for the 2003 blackout. I think in hindsight, you get a real perspective as to how unique those moments of crisis are in a place like New York City.”-Casey Neistat