“The hard necessity of bringing the judge on the bench down into the dock has been the peculiar responsibility of the writer in all ages of man.”-Nelson Algren 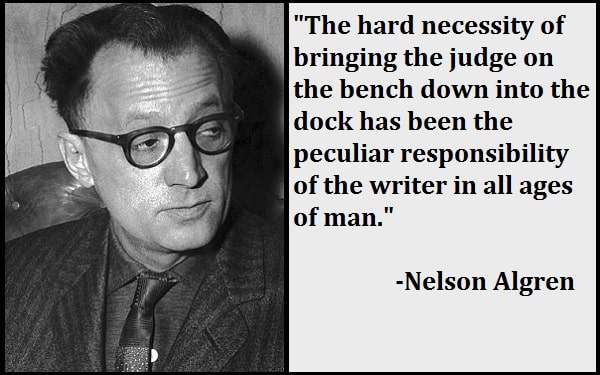 “The Impossible Generalized Man today is the critic who believes in loving those unworthy of love as well as those worthy – yet believes this only insofar as no personal risk is entailed. Meaning he loves no one, worthy or no. This is what makes him impossible.”-Nelson Algren

“I’ve always felt strongly that a writer shouldn’t be engaged with other writers, or with people who make books, or even with people who read them. I think the farther away you get from the literary traffic, the closer you are to sources. I mean, a writer doesn’t really live; he observes.”-Nelson Algren

“The struggle to write with the profundity of emotion and at the same time to live like a millionaire so exhausted F. Scott Fitzgerald that he was at last brought down to the point where he could no longer be both a good writer and a decent person.”-Nelson Algren

“I do have the feeling that other writers can’t help you with writing. I’ve gone to writers’ conferences and writers’ sessions and writers’ clinics, and the more I see of them, the more I’m sure it’s the wrong direction. It isn’t the place where you learn to write.”-Nelson Algren

“The reason nobody investigates the men who are trading off our freedoms for private enrichment is that they are the very ones who are doing the investigating.”-Nelson Algren

“I don’t think I’ve ever been either militant or profound as an anti-Fascist. When the issue has come up, when certain things have come up, and I’ve been called on to express – literally, when I’ve been cornered, then I take a left-wing stand.”-Nelson Algren

“The American middle class’s faith in personal comfort as an end in itself is, in essence, a denial of life. And it has been imposed upon American writers and playwrights strongly enough to cut them off from their deeper sources.”-Nelson Algren

“Obsession remains the price of creation, and the writer who declines that risk will come up with nothing more creative than ‘The Foxes of Harrow’ or ‘Mrs. Parkington.'”-Nelson Algren

“I don’t think the isolation of the American writer is a tradition; it’s more that, geographically, he just is isolated, unless he happens to live in New York City. But I don’t suppose there’s a small town around the country that doesn’t have a writer.”-Nelson Algren

“Chicago is an October sort of city even in spring.”-Nelson Algren

“Loving Chicago is like loving a woman with a broken nose.”-Nelson Algren

“If you write something, and you believe in it, you’d like to see sixty million people moved by it.”-Nelson Algren

“I am against censorship. I don’t think there is anything more stupid than censorship.”-Nelson Algren