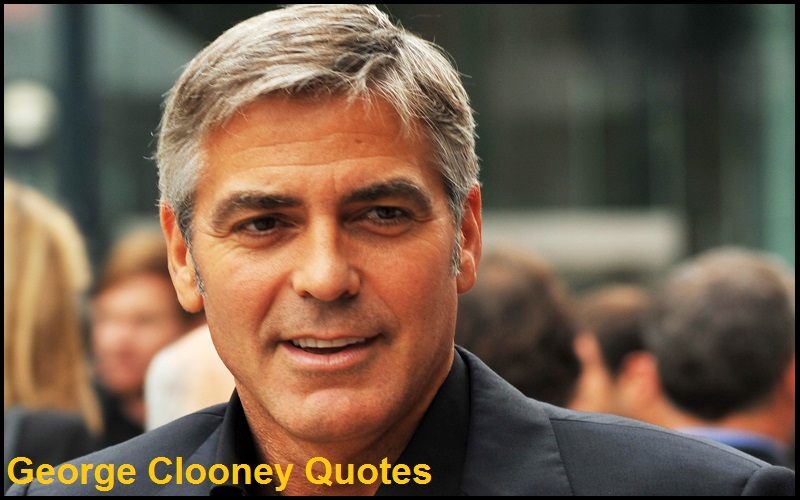 “I think you should automatically donate your organs because that would turn the balance of organ donation in a huge way. I would donate whatever anybody would take, and I’d probably do the cremation bit.”-George Clooney 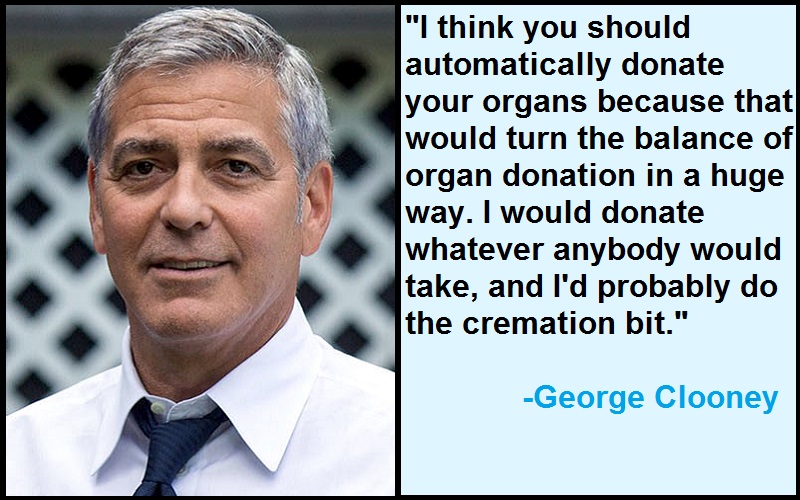 “But I’m kind of comfortable with getting older because it’s better than the other option, which is being dead. So I’ll take getting older.”-George Clooney

“The only failure is not to try.”-George Clooney

“In doing the screenplay for ‘Good Night, and Good Luck,’ the most important thing for me was to constantly go back to wherever the opposition would argue. So I had to keep reading all the books and articles about why McCarthy is such a good guy.”-George Clooney

“It’s not about an opening weekend. It’s about a career, building a set of films you’re proud of Period.”-George Clooney

“If people see me having dinner with a beautiful woman, they immediately believe that I’m having a love affair with her. Of course, that’s rubbish. I’m not a playboy!”-George Clooney

“I enjoy going on motorcycle trips and stopping in small towns and enjoying drinks with the locals.”-George Clooney

“Hosting is work. It means you don’t get to go up to your room and disappear and take a nap. Like everybody else does after lunch. I’m talking about hosting, not hosting a dinner party, but hosting people staying in your home.”-George Clooney

“I’m kind of comfortable with getting older because it’s better than the other option, which is being dead. So I’ll take getting older.”-George Clooney

“It’s not that I lead this oblivious life where I think I’ve got such a great personality that people want to spend time with me. If someone has a poster of you or asks for your autograph, clearly you can’t take them out on a date. It’s not that interesting if someone is just interested in you.”-George Clooney

“I believe in all the qualities of being a liberal. I keep going back to all the great social events in our country’s history, starting with the Salem witch trials, where the conservative view was that they’re witches and should be burned at the stake, and the liberal view was there’s no such thing as witches.”-George Clooney

“I’ve been working with Pat Robertson on Africa debt-relief, and we disagree on virtually everything except certain very specific, inalienable rights, and the truth is that morality and patriotism come in all shapes and sizes.”-George Clooney

“My grandparents back in Kentucky owned a tobacco farm. So, to make money in the summer, we could cut and chop and top and house and strip the tobacco.”-George Clooney

“Growing old on screen is not for the faint of heart.”-George Clooney

“It’s possible for me to make a bad movie out of a good script, but I can’t make a good movie from a bad script.”-George Clooney

“I’ve walked with very famous people down red carpets over to the crowd of thousands of people, and you’ll reach out to shake their hand and they’ve got a camera in their hand. And they don’t even get their hand out, because they’re recording the whole time.”-George Clooney

“My life isn’t focused on results. My life is really focused on the process of doing all the things I’m doing, from work to relationships to friendships to charitable work.”-George Clooney

“After doing One Fine Day and playing a pediatrician on ER, I’ll never have kids. I’m going to have a vasectomy.”-George Clooney

“I’m the old-fashioned type who prefers to meet a woman in a more normal setting. I don’t like to feel that I’m being hunted down. I’ve always liked to do my own hunting when it comes to meeting women.”-George Clooney

“I’ve been my most happy and my most unhappy in relationships. I have family and friends and people I care very much about. I’ve got a really, really, really good life.”-George Clooney

“You never really learn much from hearing yourself talk.”-George Clooney

“The simple truth is that everyone has an opinion, everyone has the right to voice it, and they should if they want to.”-George Clooney

“My parents were disappointed I didn’t finish college, and they were really upset when I went to Hollywood to become an actor. I was a big disappointment for them.”-George Clooney

“I grew up in the world of bad television, on my dad’s sets and then as a young schmuck on dating shows and so on.”-George Clooney

“I’m the flavor of the month.”-George Clooney

“I’d think, ‘In a relationship, we should never have his kind of fight.’ Then, instead of figuring out how to make it work, I looked for a way to get out of it. The truth is, you shouldn’t be married if your that kind of person.”-George Clooney

“I’m a Method actor. I spent years training for the drinking and carousing I had to do in this film.”-George Clooney

“I was watching ‘Up In The Air’ and I thought, ‘Jesus, who’s the old gray-haired guy?’ And it was me. I never wear makeup for movies and now it’s starting to show.”-George Clooney

“I just found out about 10 days ago that I must live 300 or 400 yards from Britney Spears… so now I have to move.”-George Clooney

“When you first start out, you are just happy to get a job, any job. And as time goes on, either you move forward or screech to a halt.”-George Clooney

“I had my Aunt Rosie, who was famous and then not, so I got a lesson in fame early on. And I understood how little it has to do with you. And also how you could use it.”-George Clooney