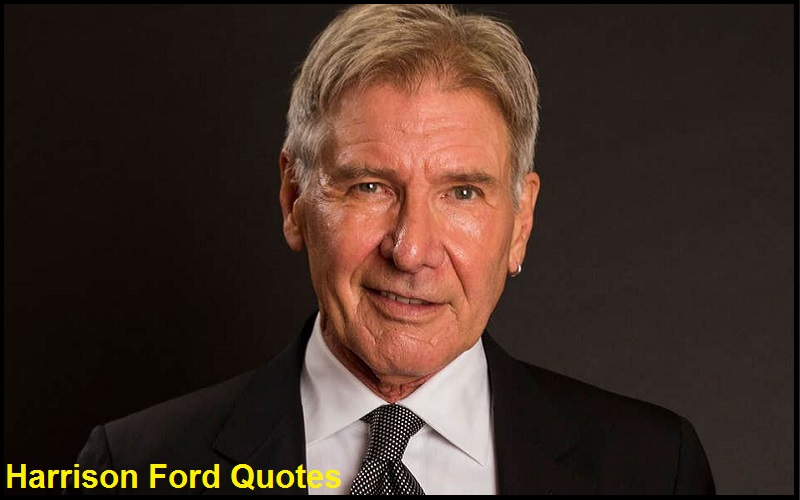 Harrison Ford Quotes:- Harrison Ford (born July 13, 1942) is an American actor. He gained worldwide fame for his starring roles as Han Solo in the Star Wars film series and as the title character of the Indiana Jones movie series. Ford is also known for playing Rick Deckard in the neo-noir dystopian science fiction film Blade Runner (1982).

“I have relationships with people I’m working with, based on our combined interest. It doesn’t make the relationship any less sincere, but it does give it a focus that may not last beyond the experience.”-Harrison Ford 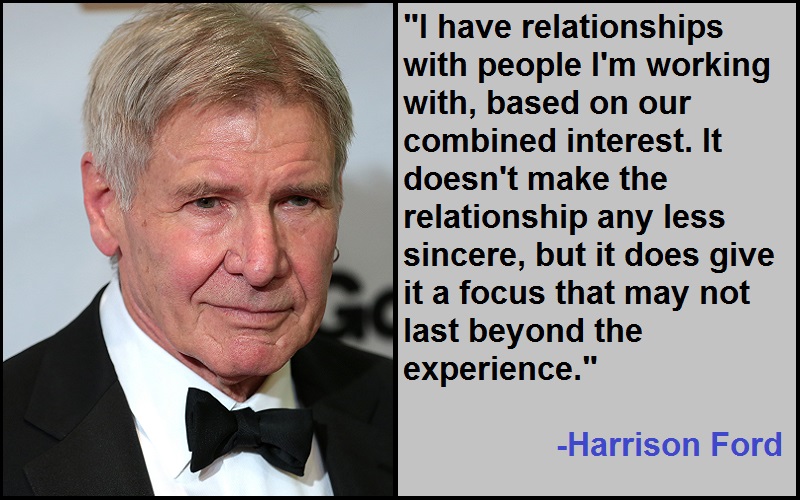 “I want to go back to the Pantanal in Brazil. I’ve never been to sub-Saharan Africa. I’d like to take my Caravan over there and do a flying safari. I’ve never flown to Alaska.”-Harrison Ford

“Am I grumpy? I might be. But I think maybe sometimes it’s misinterpreted.”-Harrison Ford

“I actually like snakes! When I was young, I was a boy scout nature camp counselor, and one of our projects was collecting snakes and creating an environment for them, so I’m quite familiar with snakes and think they’re fantastic creatures.”-Harrison Ford

“Some actors couldn’t figure out how to withstand the constant rejection. They couldn’t see the light at the end of the tunnel.”-Harrison Ford

“I’m quite curious and excited about seeing a new script for ‘Blade Runner.’ If, in fact, the opportunity would exist to do another, if it’s a good script, I would be very anxious to work with Ridley Scott again; he’s a very talented and passionate filmmaker. And I think it would be very interesting to revisit the character.”-Harrison Ford

“There is no child left within me, none whatsoever.”-Harrison Ford

“I fly myself everywhere. I like all kinds of flying, including practical flying for search and rescue. And I also like to fly in to the backcountry, usually the Frank Church Wilderness in Idaho. I go with a group of friends, and we set up camp for about five days and explore little dirt strips and canyons.”-Harrison Ford

“All my friends were going off to be professionals, and I said I wanted to be an actor.”-Harrison Ford

“What’s important is to be able to see yourself, I think, as having commonality with other people and not determine, because of your good luck, that everybody is less significant, less interesting, less important than you are.”-Harrison Ford

“I went down to Venezuela and ended up renting a helicopter and flew with my sons to the tops of the tepuis, these freestanding jungle mesas, ‘lost worlds’ as it were. In fact, it’s almost impossible to access them without one. So we were able to land and spend some time there. We were trapped for about six hours by clouds that came in.”-Harrison Ford

“I was completely unprepared for the public spectacle my private life became, and didn’t like it a bit.”-Harrison Ford

“The kindest word to describe my performance in school was Sloth.”-Harrison Ford

“I could take Sean Connery in a fight… I could definitely take him.”-Harrison Ford

“I accrued anger from people’s low opinion of me and my work, and for the work I might be capable of.”-Harrison Ford

“My goal was just to work regularly. I didn’t ever expect to be rich or famous. I wanted to be a working character actor.”-Harrison Ford

“I am Irish as a person, but I feel Jewish as an actor.”-Harrison Ford

“J. J. Abrams is a director that I’ve admired for a long time, from the very first scripts he wrote – including ‘Regarding Henry,’ which I was in.”-Harrison Ford

“My approach to acting is the ‘let’s pretend’ school of acting.”-Harrison Ford

“I don’t do nostalgia. It just doesn’t occur to me. I’m living in the moment, and I don’t have that gene.”-Harrison Ford

“My character is meant to know nothing about rap, and not to like it very much, but I know about it because my kids make me listen to it. There’s some rap I do like very much. I like Eminem, Blackalicious.”-Harrison Ford

“I was never that much a focus of interest in my career. I’m aware of that now, which doesn’t give me a lot of pleasure.”-Harrison Ford

“On the first ‘Indiana Jones’ movie, I tore an ACL in one of my knees – can’t remember which knee. The scene in which I was fighting the big German mechanic on an airplane called a flying wing, I was run over by the landing gear and injured my knee, but I can’t remember which one it was. Lots of bumps and injuries along the way.”-Harrison Ford

“Really, what are the options? Levi’s or Wranglers. And you just pick one. It’s one of those life choices.”-Harrison Ford

“You know you’re getting old when all the names in your black book have M. D. after them.”-Harrison Ford

“To me, success is a choice and an opportunity.”-Harrison Ford

“It’s part of the job of the actor to torture the director.”-Harrison Ford

“We all have big changes in our lives that are more or less a second chance.”-Harrison Ford

“I have the ordinary experience of being anonymous when I’m in an airplane talking to air traffic control, and they don’t know who they’re talking to. I have a lot of common experiences.”-Harrison Ford

“The trick of this thing and the beauty of this thing is that it’s a cowboy movie first and then stuff happens. Even after stuff happens it doesn’t change – it hasn’t suddenly changed into another kind of movie. It’s still a cowboy movie. And that’s what’s incredible about it because nobody has done that before, that’s new territory.”-Harrison Ford