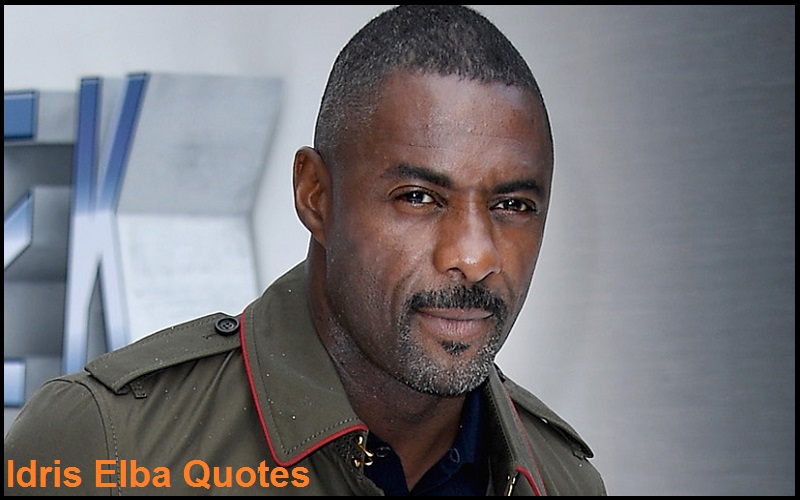 He is known for roles including Stringer Bell in the HBO series The Wire, DCI John Luther in the BBC One series Luther, and Nelson Mandela in the biographical film Mandela: Long Walk to Freedom.

He has been nominated four times for a Golden Globe Award for Best Actor – Miniseries or Television Film, winning one, and was nominated five times for a Primetime Emmy Award.

“I love bikes. I used to own one, but I fell off it when I was younger and that was the end of my bike riding days until now.“-Idris Elba 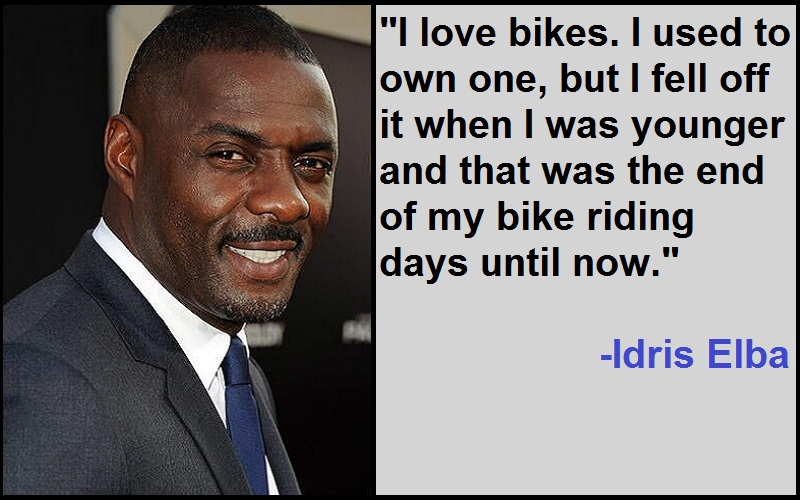 “I’m an ambitious person. I never consider myself in competition with anyone, and I’m not saying that from an arrogant standpoint, it’s just that my journey started so, so long ago, and I’m still on it and I won’t stand still.”-Idris Elba

“Not obsessed with particularly Nike, but sneakers in general. I love them.”-Idris Elba

“Whether it’s music or acting, that creativity all comes from the same source.”-Idris Elba

“I love to play different roles. That’s just the kind of actor I am.”-Idris Elba

“There’s a fast-track if you can do the networking. For some personalities, it works, but for mine, it doesn’t.”-Idris Elba

“I’m rebelling against being handed a career, like, ‘You’re the next this; you’re the next that.’ I’m not the next anything, I’m the first me. I can’t be myself, I can’t just be “-Idris Elba. But that’s just the nature of the business.”-Idris Elba

“I get criticized for taking roles in films like ‘Ghost Rider 2’, but if you look at my resume, dude, I’ve mixed it up as much as I can.”-Idris Elba

“I was really ambitious, so I was innovative. I was one of the first DJs to do live calls, ’cause I found this phone device that would pick up other people’s voices.”-Idris Elba

“I was into Spider-Man when I was a kid and that was the only comic I’ve ever read.”-Idris Elba

“Yeah, I know, any time you hear an actor say, ‘I do music’, you cringe. But I want to be gradual with my music. I want to earn my stripes.”-Idris Elba

“As an actor, you’re trained to do the right thing, be politically correct, say your lines, say the right thing about the people you’re working with.”-Idris Elba

“Because I was big, I didn’t have to listen to anyone doubting me. I was just considered good at football or whatever, there were no questions about it.”-Idris Elba

“Every leading lady I work with, I’ll see if I can get a song out of them and put it on an album.”-Idris Elba

“People expect me to be that guy. But I’m more east London boy than east Baltimore.”-Idris Elba

“I’m a little sheepish about it. Whenever I meet fans and they’re like, ‘Oh, you’re so sexy,’ I just don’t get that. There’s no way one man can be universally sexy.”-Idris Elba

“It’s weird because my parents don’t really understand my business. I get fan mail all day long, but if a piece happens to get to their house, they’re like, ‘Oh, my God, you’ve got a fan! You have to write them back. You have to do it!”-Idris Elba

“If I was gonna go to jail, I don’t want to go to jail for stealing a bottle of water. I’ll steal that $20 million. At least then it was worth it.”-Idris Elba

“I’ve always been DJing; it’s just I’m making more of a push for it, making it more public.”-Idris Elba

“The one album I can’t live without is called ‘Cumbolo’ by a band called Culture. Every song on their album is deep, but there’s one in particular called ‘This Train.’ I have a tattoo of the lyrics on my left arm.”-Idris Elba

“The only thing I change mainly is my sneakers. I love the sneakers. But everything’s sort of black or jeans. Jeans, always.”-Idris Elba

“I don’t have a place that I call home at the moment because there’s no point. I mean, I’m a traveling circus for a while. It’s weird. Like, if I wanted to go home, there’s nowhere to go. I just go to the hotel. But I’ve kind of gotten used to it.”-Idris Elba

“The adrenaline feeling of jumping out of cliffs and bikes and all of that is very specific to the film. In ‘Pac Rim’ I’m not doing that so much. There isn’t that touch stonework for me in it, but there is a lot of action.”-Idris Elba

“When I look at my body of work, I’ve played a lot of characters who are morally conflicted – ‘I’m right, no I’m wrong, I don’t know what to do!’ I want to play more characters who don’t care as much, and who aren’t as measured. They are what they are, no apologies.”-Idris Elba

“There’s the argument that you can relate to someone who’s completely unrelatable. In the way that a director shows you his imagination on a film, then I get to show you my imagination in a big dumb character.”-Idris Elba

“You know, the film is the ultimate goal in an actor’s career. I mean, I still love TV. I have my feet firmly stamped in it. But my opportunities have been bigger and better.”-Idris Elba

“It’s actually quite criminal how ‘The Wire’ was systematically ignored.”-Idris Elba

“I knew that if I wanted to be all I could be, I would have to go to the U.S. It took three years to get the accent right.”-Idris Elba

“Africans, we hold on to our youths and whip them into shape.”-Idris Elba

“When I was a kid, I thought it was tough.”-Idris Elba

“I wasn’t bad at school, but I was never a bookworm.”-Idris Elba

“The less I talk about being black, the better.”-Idris Elba

“I’d rather a young black actor read about success as opposed to how tough it was. I get these roles because I can act and that’s it. Hopefully, that’s it.”-Idris Elba

“The long and short of it is that I am now in a position in England to greenlight movies, and that’s really excellent – not high-budget movies, but movies none the less.”-Idris Elba

“It could be Grammy night, Oscar night, whatever – I don’t feel the pressure to be there.”-Idris Elba

“I tend to stay away from the comics.”-Idris Elba

“Now there are certain things you have to prepare – like dialect and special skills. But at the moment, the interaction between two characters on the page doesn’t need – for me, I don’t need to prepare that.”-Idris Elba

“It was deeply important for me to understand where Mandela came from. Because we know where he was going, and that’s a famous story, but who was he? Where did he come from? What was his upbringing?”-Idris Elba

“I’ve always had ambition, and the acting was successful and put my name on the map, but it was never the plan to stop there.”-Idris Elba

“The role of my agent has just been to get me in the room. If I can get in the room – say a character is just a charming man who lives next door – then I’ll walk in there and be as charming as I can and they will think to themselves, ‘I don’t see why we can’t cast him.”-Idris Elba

“I’m not interested in making all-black films – I come from a very diverse culture; I want to work with every type of person. I work a lot with women executives because they seem to be a lot more open-minded about that and a lot more progressive in that way.”-Idris Elba

“I want to go to Sierra Leone with something – whether it’s some sort of contribution to healthcare, or to the entertainment industry. My cousin is a nurse; we are talking about opening a clinic.”-Idris Elba

“If you are going to call a film a ‘black film’ then you have to make a film that represents everyone that’s black, which is almost impossible. That is why white films are not called white films, they are just called ‘films.'”-Idris Elba

“You watch yourself age and it’s hard to feel like a sex symbol.”-Idris Elba

“Apparently, Daniel Craig said I’d be a great Bond. Daniel, why did you say that? Dropped me right in it! What an honor it would be, but also, what an indication of change.”-Idris Elba

“Sean Connery wasn’t the Scottish James Bond and Daniel Craig wasn’t the blue-eyed James Bond. So if I played him, I don’t want to be called the black James Bond.”-Idris Elba

“There has been a big debate about it: can a black man play a Nordic character?”-Idris Elba

“I think there’s a tendency for actors like myself, and I don’t mean to generalize myself, but I’ve played ‘men’s men,’ if you will, characters that are simmering rage and calculated. There’s a trend not to play anything that is opposed to that.”-Idris Elba

“I would never be fearful of any character.”-Idris Elba

“I did a rendition of ‘Billie Jean’ which is on my Soundcloud. I put it on Twitter, and it got about 3000 hits that day.”-Idris Elba

“I’ve never had to explain ‘Prometheus’ to people, ever. Most people get it.”-Idris Elba

“Television has shied away from being too dark, because so much has happened to us recently here in the West, and people are sort of wanting to see more uplifting sorts of things.”-Idris Elba

“I lived in America for a long time before I started working as an actor. Some actors show up on set and have never done an American accent before, so they rely on a slew of technical mechanisms. Part of what makes an accent is understanding why people speak that way – you have to understand the culture.”-Idris Elba

“What really excites me in a project is when it goes in a way you haven’t been before.”-Idris Elba

“I try to fit in workouts whenever I can.”-Idris Elba

“I have one of these bodies. When I was younger, I could never put weight on, and now that I’m a little older, there’s a natural sort of chubbiness coming. But honestly, if I work out for a week, it drops off in no time.”-Idris Elba

“I was always a real athletic kid. Then when I got older, I just figured it was part of life to keep training.”-Idris Elba

“I don’t get recognized that much yet in London, but when I do I get a real sense of achievement.”-Idris Elba

“If you go to Africa and you’re white, you’re probably not going to get that much work either. But the fact is that there is a long history of black integration in the U.S. I don’t have any resentment about this: I did the maths, calculated it against my ambition and decided to leave England.”-Idris Elba

“I was on a well-beaten path of actors – what we all call ‘the Law and Order route’. I spent two years of auditioning for everything… and then ‘The Wire’ came up.”-Idris Elba