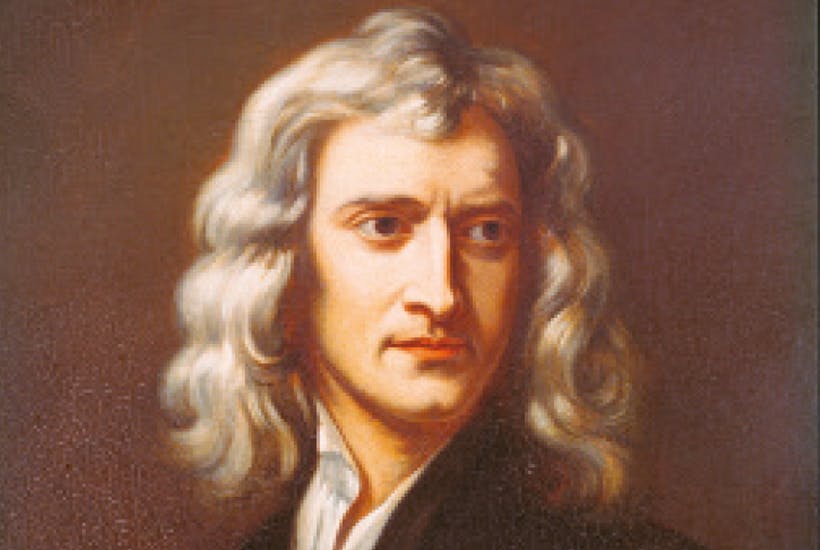 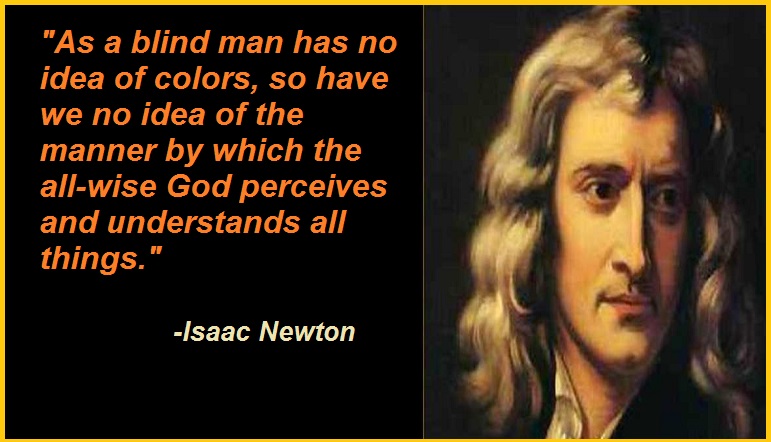 Isaac Newton Quotes:- Isaac Newton PRS FRS was an English mathematician, physicist, astronomer, theologian, and author who is widely recognized as one of the most influential scientists of all time, and a key figure in the scientific revolution.

Isaac Newton was born, premature and tiny, in 1642 in Woolsthorpe, England. His father, wealthy but uneducated, died before Newton was born, and he ended up being raised by his grandmother after his mother remarried.

He worked as a servant to pay his bills. And he kept a journal about his ideas. It’s said he didn’t excel at school, but he ended up studying law at Trinity College Cambridge, part of Cambridge University. 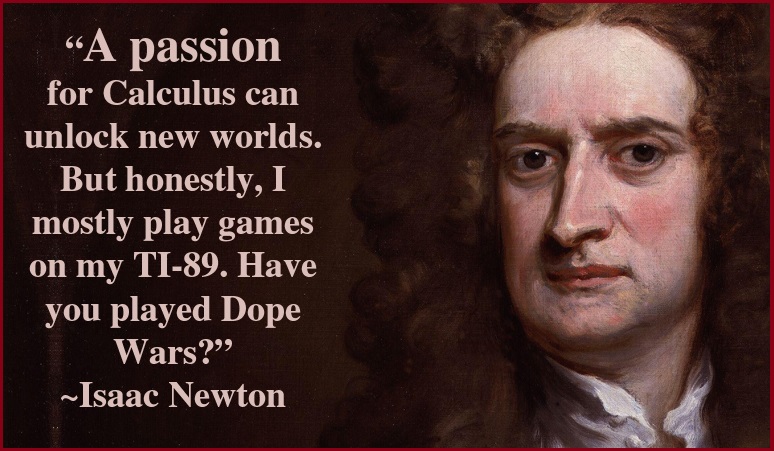 Isaac Newton is synonymous with apples and gravity. He rose to become the most influential scientist of the 17th century, his ideas becoming the foundation of modern physics, after very humble beginnings.

But first, the big question: Did an apple really fall on Newton’s head and spur him to figure out gravity? Historians say there is likely no more than a grain of truth to the story. 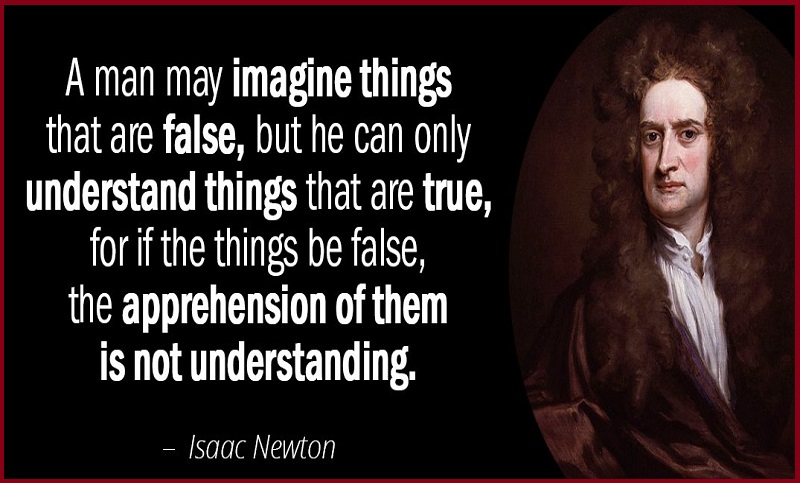 “All variety of created objects which represent order and life in the universe could happen only by the willful reasoning of its original Creator, whom I call the ‘Lord God.”-Isaac Newton

“An object in motion tends to remain in motion along a straight line unless acted upon by an outside force.”-Isaac Newton

“Are not rays of light very small bodies emitted from shining substances?”-Isaac Newton

“As a blind man has no idea of colors, so have we no idea of the manner by which the all-wise God perceives and understands all things.”-Isaac Newton

“Atheism is so senseless. When I look at the solar system, I see the earth at the right distance from the sun to receive the proper amounts of heat and light. This did not happen by chance.”-Isaac Newton

“I have a fundamental belief in the Bible as the Word of God, written by those who were inspired. I study the Bible daily.”-Isaac Newton

“Hypotheses should be subservient only in explaining the properties of things but not assumed in determining them, unless so far as they may furnish experiments.”-Isaac Newton

“Tact is the art of making a point without making an enemy.”-Isaac Newton

“I can calculate the motion of heavenly bodies, but not the madness of people.”-Isaac Newton

“I have explained the phenomena of the heavens and of our sea by the force of gravity, but I have not yet assigned a cause to gravity.”-Isaac Newton

“If I have done the public any service, it is due to my patient thought.”-Isaac Newton

“If I have seen further than others, it is by standing upon the shoulders of giants.”-Isaac Newton

“If the experiments which I urge be defective, it cannot be difficult to show the defects; but if valid, then by proving the theory, they must render all objections invalid.”-Isaac Newton

“It is reasonable that forces directed toward bodies depend on the nature and the quantity of matter of such bodies, as happens in the case of magnetic bodies.”-Isaac Newton

“It is the weight, not numbers of experiments that is” to be regarded.”-Isaac Newton

“It may be that there is no such thing as an equable motion, whereby time may be accurately measured. All motions may be accelerated or retarded, but the true, or equable, the progress” of absolute time is liable to no change.”-Isaac Newton

“My powers are ordinary. Only my application brings me success.”-Isaac Newton

“Opposite to godliness is atheism in profession, and idolatry in practice. Atheism is so senseless and odious to mankind, that it never had many professors.”-Isaac Newton

“Plato is my friend; Aristotle is my friend, but my greatest friend is the truth”.-Isaac Newton

“The ancients considered mechanics in a twofold respect: as rational, which proceeds accurately by demonstration, and practical. To practical mechanics, all the manual arts belong, from which mechanics took its name.”-Isaac Newton

“The best and safest method of philosophizing seems to be first to inquire diligently into the properties of things, and establishing those properties by experiments, and then to proceed more slowly to hypotheses for the explanation of them.”-Isaac Newton

“The center” of the system of the world is immovable.”-Isaac Newton

The description of right lines and circles, upon which geometry is founded, belongs to mechanics. Geometry does not teach us to draw these lines, but requires them to be drawn.”-Isaac Newton

“The hypothesis of matter’s being at first evenly spread through the heavens is, in my opinion, inconsistent with the hypothesis of innate gravity without a supernatural power to reconcile them, and therefore, it infers a deity.”-Isaac Newton

“The Ignis Fatuus is a vapor shining without heat.”-Isaac Newton

“The moon gravitates towards the earth and by the force of gravity is continually drawn off from a rectilinear motion and retained in its orbit.”-Isaac Newton

“The motions which the planets now have could not spring from any natural cause alone, but were impressed by an intelligent Agent.”-Isaac Newton

“The proper method for inquiring after the properties of things is to deduce them from experiments.”-Isaac Newton

“There are more sure marks of authenticity in the Bible that in any profane history.”-Isaac Newton

“This most beautiful system of the sun, planets, and comets, could only proceed from the counsel and dominion of an intelligent and powerful Being.”-Isaac Newton

“To every action”, there is always opposed an equal reaction.”-Isaac Newton

“To explain all nature is too difficult a task for any one man or even for anyone” age. ‘Tis much better to do a little with certainty & leave the rest for others that come after you.”-Isaac Newton

“To me” there has never been a higher source of earthly honor or distinction than that connected with advances in science.”-Isaac Newton

“Truth is ever to be found in simplicity, and not in the multiplicity and confusion of things.”-Isaac Newton

“We account the Scriptures of God to be the most sublime philosophy.”-Isaac Newton

“We are certainly not to relinquish the evidence of experiments for the sake of dreams and vain fictions of our own devising; nor are we to recede from the analogy of Nature, which is wont to be simple and always consonant to itself.”-Isaac Newton

“We are to admit no more causes of natural things than such as are both true and sufficient to explain their appearances.”-Isaac Newton

“We build too many walls and not enough bridges.”-Isaac Newton

“What goes up must come down.”-Isaac Newton