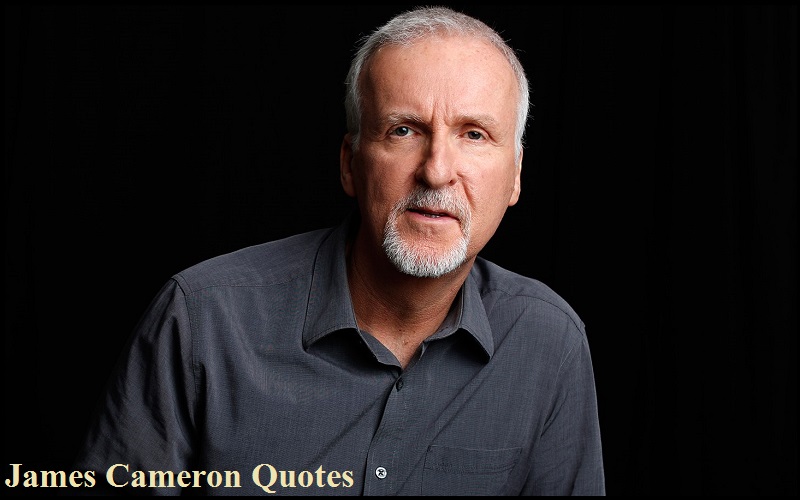 James Cameron Quotes:- James Cameron (born August 16, 1954) is a Canadian filmmaker and environmentalist who currently lives in New Zealand and the United States. After working in special effects, he found major success since directing and writing the science fiction action film The Terminator.

He then became a popular Hollywood director and was hired to write and direct Aliens three years later he followed up with The Abyss. He found further critical acclaim for his use of special effects in Terminator 2: Judgment Day.

After his film True Lies, Cameron took on his biggest film at the time, Titanic, which earned him Academy Awards for Best Picture, Best Director and Best Film Editing.

“Storytelling is storytelling. You still play by the same narrative rules. The technology is completely different. I don’t use one piece of technology that I used when I started directing.”-James Cameron 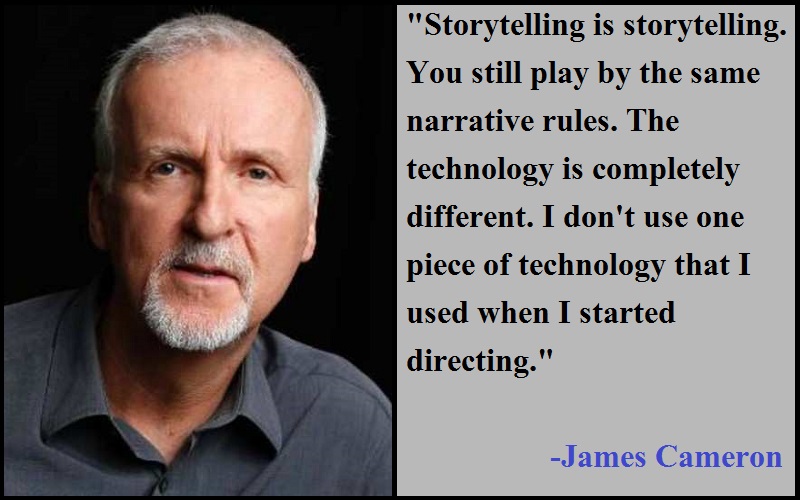 “There are many talented people who haven’t fulfilled their dreams because they over thought it, or they were too cautious and were unwilling to make the leap of faith.”-James Cameron

“To convince people to back your idea, you’ve got to sell it to yourself and know when it’s the moment. Sometimes that means waiting. It’s like surfing. You don’t create energy, you just harvest energy already out there.”-James Cameron

“If you set your goals ridiculously high and it’s a failure, you will fail above everyone else’s success.”-James Cameron

“The snake kills by squeezing very slowly. This is how the civilized world slowly, slowly pushes into the forest and takes away the world that used to be.”-James Cameron

“I had read tons of science fiction. I was fascinated by other worlds, other environments. For me, it was fantasy, but it was not fantasied in the sense of pure escapism.”-James Cameron

“The film industry is about saying ‘no’ to people, and inherently you cannot take ‘no’ for an answer.”-James Cameron

“What are you gonna do, talk the alien to death?”-James Cameron

70+ Insightful Quotes By James Cameron On Hope And Goals

“People call me a perfectionist, but I’m not. I’m a rightist. I do something until it’s right, and then I move on to the next thing.”-James Cameron

“I’m hopeful that we’ll be able to study the ocean before we destroy it.”-James Cameron

“Nature’s imagination is so boundless compared to our own meager human imagination.”-James Cameron

“I actually started as a model builder and quickly progressed into production design, which made sense because I could draw and paint. But I kept watching that guy over there who was moving the actors around and setting up the shots.”-James Cameron

“Every time you dive, you hope you’ll see something new – some new species. Sometimes the ocean gives you a gift, sometimes it doesn’t.”-James Cameron

“Pick up a camera. Shoot something. No matter how small, no matter how cheesy, no matter whether your friends and your sister star in it. Put your name on it as director. Now you’re a director. Everything after that you’re just negotiating your budget and your fee.”-James Cameron

“I’ve tried not to get sucked into the Hollywood hierarchy system. Personally, I don’t like it when people are deferential to me because I’m an established filmmaker. It’s a blue-collar sensibility.”-James Cameron

“I love short trips to New York; to me, it is the finest three-day town on earth.”-James Cameron

“I mean, you have to be able – you have to have made the commitment within yourself to do whatever it takes to get the job done and to try to inspire other people to do it because obviously the first rule is you can’t do it by yourself.”-James Cameron

“I like the evening in India, the one magic moment when the sun balances on the rim of the world, and the hush descends, and ten thousand civil servants drift homeward on a river of bicycles, brooding on Lord Krishna and the cost of living.”-James Cameron

“It’ll be all of our efforts together. It won’t won’t ever be exactly the way I imagined it. And that is, I think, an important lesson as well is that in any group enterprise it’s going to be the sum total of the group.”-James Cameron

“I don’t use film cameras. I don’t do visual effects the same way. We don’t use miniature models; it’s all CG now, creating worlds in CG. It’s a completely different toolset. But the rules of storytelling are the same.”-James Cameron

“There is a hugely underserved population out there… those who are the least capable of paying pay the highest.”-James Cameron

“I try to live with honor, even if it costs me millions of dollars and takes a long time. It’s very unusual in Hollywood. Few people are trustworthy – a handshake means nothing to them. They feel they’re required to keep an agreement with you only if you’re successful or they need you.”-James Cameron

“People think that what I see diving must drive what I put into films, but that isn’t really the case. When I am making a Hollywood production, I am telling a different kind of story. Of course, if I see something interesting that works, we will look at it, but they are different things.”-James Cameron

“Inspiration can hit you in the head at any time in any context. It could happen in a conversation. Talking to someone at a party, you can get an idea. But you’ve got to remember those inspirations.”-James Cameron

“I always do makeup touch-ups myself, especially for blood, wounds, and dirt. It saves so much time.”-James Cameron

“The films that influenced me were so disparate that there’s almost no pattern.”-James Cameron

“I was always fascinated by engineering. Maybe it was an attempt maybe to get my father’s respect or interest, or maybe it was just a genetic love of technology, but I was always trying to build things.”-James Cameron

“You have to not listen to the naysayers because there will be many and often they’ll be much more qualified than you and cause you to sort of doubt yourself.”-James Cameron

“I watched a couple of really bad directors work, and I saw how they completely botched it up and missed the visual opportunities of the scene when we had put things in front of them as opportunities. Set pieces, props and so on.”-James Cameron

“If you wait until the right time to have a child you’ll die childless, and I think film making is very much the same thing. You just have to take the plunge and just start shooting something even if it’s bad.”-James Cameron

“It took me a long time to realize that you have to have a bit of an interlanguage with actors. You have to give them something that they can act with.”-James Cameron

“My mother was a housewife but she was also an artist. My father was an electrical engineer.”-James Cameron

“So much of literary sci-fi is about creating worlds that are rich and detailed and make sense at a social level. We’ll create a world for people and then later present a narrative in that world.”-James Cameron

“I blame it on Walt Disney, where animals are given human qualities. People don’t understand that a wild animal is not something that is nice to pat. It can seriously harm you.”-James Cameron

“Any direct experience that I have with indigenous peoples and their plights may feed into the nature of the story I choose to tell. In fact, it almost certainly will.”-James Cameron

“Building upon the world we created with ‘Avatar’ has been a rare and incredibly rewarding experience. In writing the new films, I’ve come to realize that ‘Avatar’s world, story, and characters have become even richer than I anticipated, and it became apparent that two films would not be enough to capture everything I wanted to put on screen.”-James Cameron

“Writing a screenplay, for me, is like juggling. It’s like, how many balls can you get in the air at once? All those ideas have to float out there to a certain point, and then they’ll crystallize into a pattern.”-James Cameron

“I think people had somehow gotten the sense that we have explored everything when that isn’t the case. We do know so little about the ocean, and so much of it is being destroyed.”-James Cameron

“I feed on other people’s creativity, photographers, artists of every kind. Sometimes a feeling that you get listening to a song can be so powerful. I’ve wanted to write whole scripts around what I felt just listening to a piece of music. I think music is important, and surrounding your visual field with stimulating things.”-James Cameron