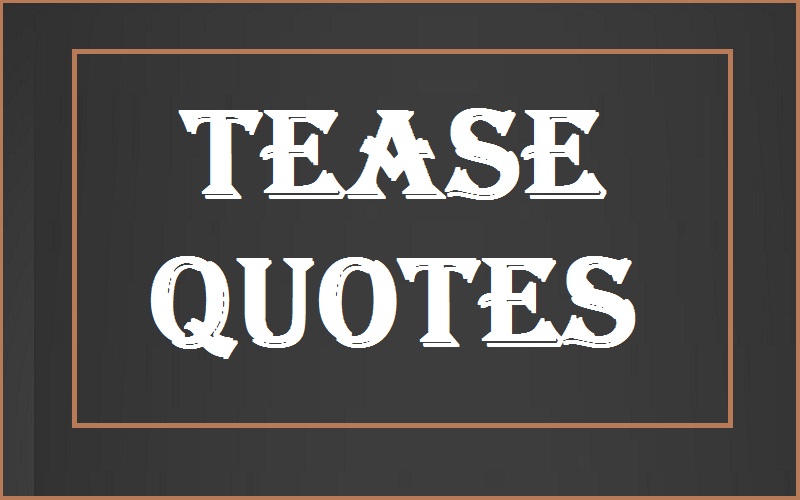 Tease Quotes:- Teasing has multiple meanings and uses. In human interactions, teasing exists in three major forms: playful, hurtful, and educative. Teasing can have a variety of effects, depending on how it is utilized and its intended effect.

Below you will find our collection of inspirational, wise, and humorous old tease quotes, tease sayings, and tease proverbs, collected over the years from a variety of sources.

“You can tease its mane all you like, but you can’t turn a house cat into a lion.”-Anne Fortier

“Kids will tease you for just about anything.”-James Badge Dale

“When a guy can make fun of you, that’s attractive. Who knew that teasing could have so much power over women!”-Rachel Bilson

“To make sense of bossiness, we need to tease apart two fundamental aspects of social hierarchy that are often lumped together: power and status. The power lies in holding a formal position of authority or controlling important resources. Status involves being respected or admired.”-Adam Grant

“You have to tease your family. You tease the ones that you’re closest to.”-Parvesh Cheena

“Some men were nothing but overgrown boys who never got over the “fun” of teasing girls, just to get noticed”-Esther M. Friesner

“It’s fun to tease people about where fiction and life intersect.”-Dorothy Allison

“A man might engage in a flirtation with disinterest, even disdain. But he never teases without affection.”-Tessa Dare

“Teasing out the way the world might look through another’s eyes is what makes the creative process so fascinating and enjoyable.”-Stephen L. Carter

“Teasing is very often a sign of inner misery.”-Christopher Hitchens

“Never tease an old dog; he might have one bite left.”-Robert A. Heinlein

“You can cease to be influenced by people who tease you… Just neglect their help and elevate your steps… You can do it!”-Israelmore Ayivor

“Before you make fun of someone, think about how you’d feel in their place. You shouldn’t laugh, tease, or make fun of anyone.”-Chris Poulos

“Listen, you only tease the ones you love.”-John Boehner

“You have to tease enough misinformation and lack of information to hopefully make people want more.”-Cary Fukunaga

“People always tease me. They say, look at you, you went for so much psychoanalysis and you’re so neurotic, you wind up marrying a girl so much younger than you.”-Woody Allen

“Thou, silent form, dost tease us out of thought As doth eternity.”-John Keats

“Everything starts with a dream, a particle of our imagination that teases us of what the future could be like, as long as we fight for it.”-Gurbaksh Chahal

“What brothers say to tease their sisters has nothing to do with what they really think of them.”-Esther M. Friesner

“The still must tease with the promise of a story the viewer of it itches to be told.”-Cindy Sherman

“Someone once told me I looked good in red, so I bought every piece of clothing in red and bright-red lipstick. I had huge hair, as big as I could tease it and spray it.”-Campbell Brown

“My friend… used to tease me about a tattoo I had right here, but it was so big, and what he was teasing me about – he said it looked like a flying monkey. It’s supposed to have been a grim reaper holding a ball. But it did look like a monkey.”-Allen Iverson

“I like the Victory rolls, beehive, pompadour – all of that stuff. It’s just cool. And actually, with ethnic hair, oddly enough, it works so well because I don’t have to tease my hair to get the body.”-Andra Day

“On Halloween, don’t you know back when you were little, your mom tells you don’t eat any candy until she checks it? I used to be so tempted to eat my candy on the way to other people’s houses. That used to be such a tease.”-Derrick Rose

“People always think that if you eat anything as a model, it’s amazing. I used to tease them and say, you know I’m going to throw up afterward.”-Christy Turlington

“I like to tease people. I hate when people do it to me, though.”- Charlie Murphy

“There may be problems we still need to tease out, but we will leave no stone unturned in our bid to make London the host city.”- Sebastian Coe