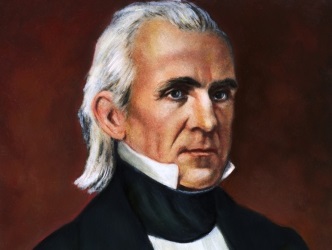 James K. Polk Quotes:- James K. Polk (November 2, 1795 – June 15, 1849) was the 11th president of the United States (1845–1849). He previously was speaker of the House of Representatives (1835–1839) and governor of Tennessee (1839–1841). A protégé of Andrew Jackson, he was a member of the Democratic Party and an advocate of Jacksonian democracy. During Polk’s presidency, the United States expanded significantly with the annexation of the Republic of Texas, the Oregon Territory, and the Mexican Cession following the American victory in the Mexican–American War.


Polk is considered by many the most effective president of the pre–Civil War era, having met during his four-year term every major domestic and foreign policy goal he had set. After a negotiation fraught with risk of war, he reached a settlement with the United Kingdom over the disputed Oregon Country, the territory for the most part being divided along the 49th parallel.

“A crowd of persons came in as soon as my office was opened. Among them were several ladies who called to pay their respects. None who called had any business of more importance than an ardent desire to serve their country, provided they could be appointed to a good office. As I has none of these to dispose of, they were, of course, disappointed.”-James K. Polk

“Although… the Chief Magistrate must almost of necessity be chosen by a party and stand pledged to its principles and measures, yet in his official action he should not be the President of a party only, but of the whole people of the United States.”-James K. Polk

“Foreign powers do not seem to appreciate the true character of our government.”-James K. Polk

“I am heartily rejoiced that my term is so near its close. I will soon cease to be a servant and will become a sovereign.”-James K. Polk


“I cannot adequately express the horror I feel for a man who can be so base as to veil his hypocrisy under the cloak of religion, and state the base falsehood he has done.”-James K. Polk

“I would bring the government back to what it was intended to be – a plain economical government.”-James K. Polk

“It becomes us in humility to make our devout acknowledgments to the Supreme Ruler of the Universe for the inestimable civil and religious blessings with which we are favored.”-James K. Polk

“It is not questioned that the Federal Government is one of limited powers. Its powers are such, and such only, as are expressly granted in the Constitution or are properly incident to the expressly granted powers and necessary to their execution.”-James K. Polk

“It is of great importance to our country generally, and especially to our navigating and whaling interests, that the Pacific Coast and, indeed, the whole of our territory west of the Rocky Mountains, should speedily be filled up by a hardy and patriotic population.”-James K. Polk

“Minorities have a right to appeal to the Constitution as a shield against such oppression.”-James K. Polk

“No person can be more deeply sensible than myself of the danger of entangling alliances with any foreign nation. That we should avoid such alliances has become a maxim of our policy consecrated by the most venerated names which adorn our history and sanctioned by the unanimous voice of the American people.”-James K. Polk

“No president who performs his duties faithfully and conscientiously can have any leisure.”-James K. Polk

“One great object of the Constitution was to restrain majorities from oppressing minorities or encroaching upon their just rights.”-James K. Polk

“Our relations with the various Indian tribes continue to be of a pacific character.”-James K. Polk

“Peace, plenty, and contentment reign throughout our borders, and our beloved country presents a sublime moral spectacle to the world.”-James K. Polk

“Senator Badger did not call. During the whole of the last session of Congress, he did not call on me. He is a bitter partisan and is no doubt sensible that during the presidential canvass of 1844, he did me gross injustice.”-James K. Polk

“The most energetic and prompt measures and the immediate appearance in arms of a large and overpowering force are recommended to Congress as the most certain and efficient means of bringing the existing collision with Mexico to a speedy and successful termination.”-James K. Polk

“The passion for office among members of Congress is very great, if not absolutely disreputable, and greatly embarrasses the operations of the Government. They create offices by their own votes and then seek to fill them themselves.”-James K. Polk

“The Senate are a branch of the treaty-making power, and by consulting them in advance of his own action upon important measures of foreign policy which may ultimately come before them for their consideration, the President secures harmony of action between that body and himself.”-James K. Polk

“The whole frame of the Federal Constitution proves that the government which it creates was intended to be one of limited and specified powers.”-James K. Polk

“The world has nothing to fear from military ambition in our Government.”-James K. Polk
“There is more selfishness and less principle among members of Congress than I had any conception of, before I became President of the U.S.”-James K. Polk

“Under the benignant providence of Almighty God the representatives of the States and of the people are again brought together to deliberate for the public good.”-James K. Polk

“With me it is exceptionally true that the Presidency is no bed of roses.”-James K. Polk

“Well may the boldest fear and the wisest tremble when incurring responsibilities on which may depend our country’s peace and prosperity, and in some degree the hopes and happiness of the whole human family.”-James K. Polk