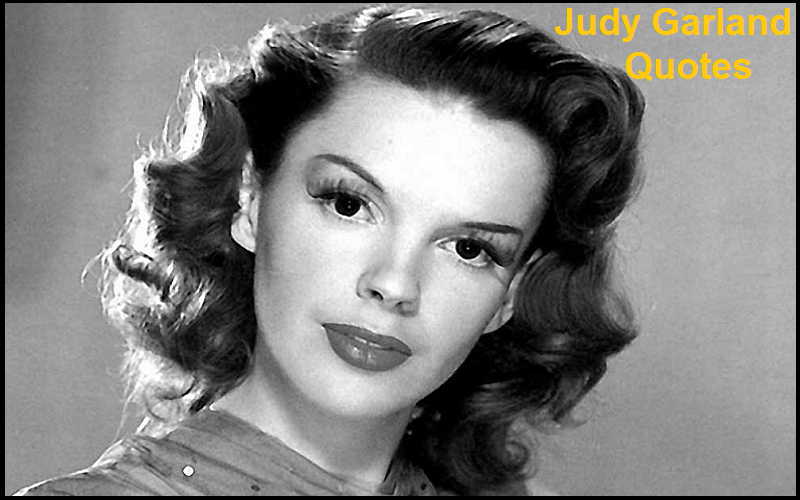 Judy Garland Quotes:- Judy Garland (born June 10, 1922 – June 22, 1969) was an American actress, singer, dancer, and vaudevillian. During a career that spanned 45 years, she attained international stardom as an actress in both musical and dramatic roles, as a recording artist, and on the concert stage. Respected for her versatility, she received a Juvenile Academy Award, a Golden Globe Award, and a Special Tony Award.

“You are never so alone as when you are ill on stage. The most nightmarish feeling in the world is suddenly to feel like throwing up in front of four thousand people.”-Judy Garland 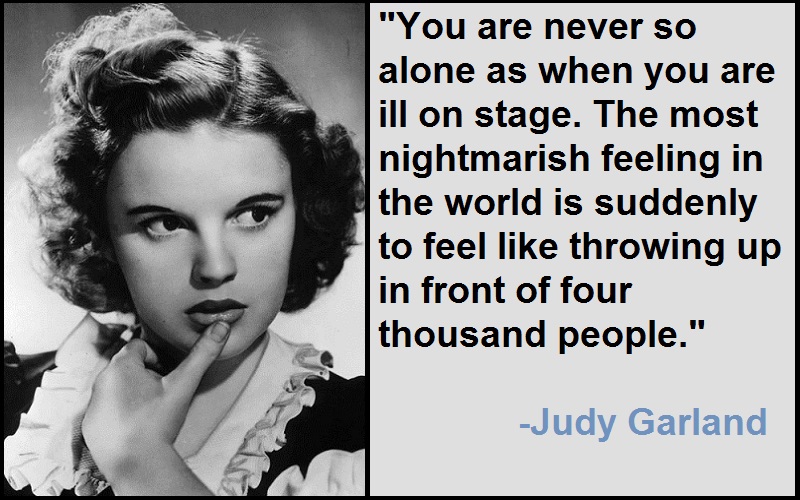 “I’ve always taken ‘The Wizard of Oz’ very seriously, you know. I believe in the idea of the rainbow. And I’ve spent my entire life trying to get over it.”-Judy Garland

“For it was not into my ear you whispered, but into my heart. It was not my lips you kissed, but my soul.”-Judy Garland

“Hollywood is a strange place if you’re in trouble. Everybody thinks it’s contagious.”-Judy Garland

“I wasn’t close to my father, but I wanted to be all my life. He had a funny sense of humor, and he laughed all the time – good and loud like I do. He was a gay Irish gentleman and very good-looking. And he wanted to be close to me, too, but we never had much time together.”-Judy Garland

“There have been a lot of stories written about me, some of them fantastically distorted.”-Judy Garland

“When you get to know a lot of people, you make a great discovery. You find that no one group has a monopoly on looks, brains, goodness or anything else. It takes all the people – black and white, Catholic, Jewish and Protestant, recent immigrants and Mayflower descendants – to make up America.”-Judy Garland

“I believe that the real expression of your religious beliefs is shown in the daily pattern of your life, in what you contribute to your surroundings and what you take away without infringing on the rights of other people.”-Judy Garland

“From the time I was thirteen, there was a constant struggle between MGM and me – whether or not to eat, how much to eat, what to eat. I remember this more vividly than anything else about my childhood.”-Judy Garland

“If you have to be in a soap opera try not to get the worst role.”-Judy Garland

“How strange when an illusion dies. It’s as though you’ve lost a child.”-Judy Garland

“If I am a legend, then why am I so lonely?”-Judy Garland

“Behind every cloud is another cloud.”-Judy Garland

“I’ve seen the ticket, and I still can’t believe it. When I see the money, I hope I don’t hit the floor.”-Judy Garland

“My father’s death was the most terrible thing that happened to me in my life.”-Judy Garland

“My mother had a marvelous talent for mishandling money – mine.”-Judy Garland

“In our house, the word of Louis B. Mayer became the law.”-Judy Garland

“I’m a woman who wants to reach out and take 40 million people in her arms.”-Judy Garland

“I don’t always have to sing a song. There is something besides ‘The Man That Got Away’ or ‘Over the Rainbow’ or ‘The Trolley Song.’ There’s a woman. There are three children. There’s me! There’s a lot of life going here.”-Judy Garland

“I’ve never looked through a keyhole without finding someone was looking back.”-Judy Garland

“We cast away priceless time in dreams, born of imagination, fed upon illusion, and put to death by reality.”-Judy Garland

“I think there’s something peculiar about me that I haven’t died. It doesn’t make sense but I refuse to die.”-Judy Garland

“There have been times when I have deliberately tried to take my life… I think I must have been crying for some attention.”-Judy Garland

“In the silence of the night, I have often wished for just a few words of love from one man, rather than the applause of thousands of people.”-Judy Garland