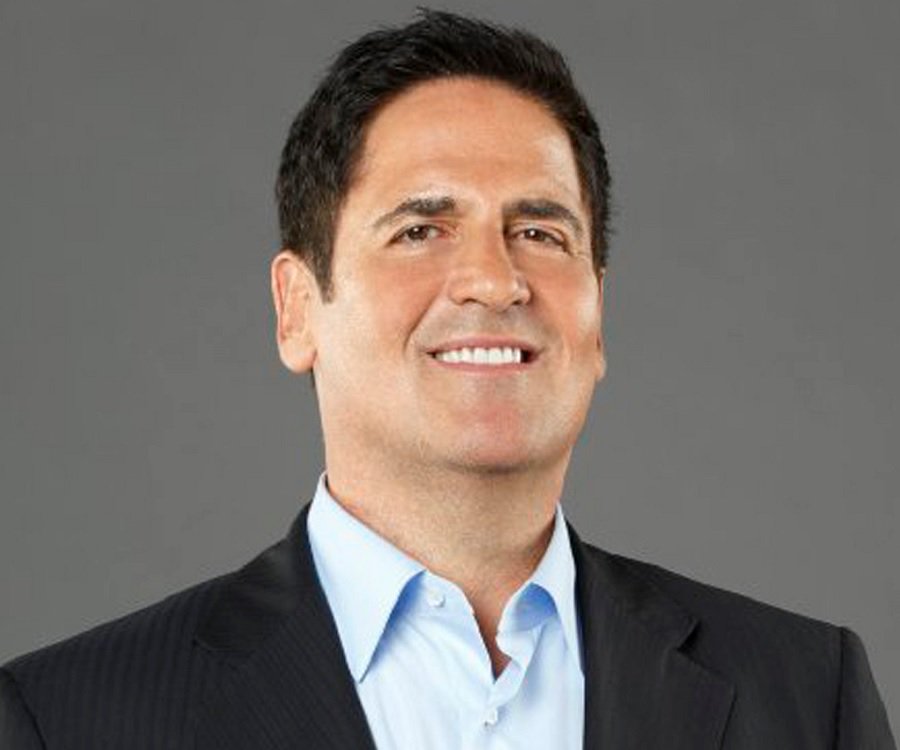 Mark Cuban Quotes:- Mark Cuban is an American businessman and investor. He is the owner of the National Basketball Association’s Dallas Mavericks, co-owner of 2929 Entertainment, and chairman of AXS TV. He is also one of the main “shark” investors on the ABC reality television series, Shark Tank.

Mark Cuban was born July 31, 1958, in Pittsburgh, Pennsylvania, to Shirley (Feldman) and Norton Cuban, an automobile upholsterer. He graduated from Indiana University in 1981 with a degree in Business.

After college, Cuban moved to Dallas, Texas, and created a computer consulting business called “MicroSolutions” which transformed him into a millionaire when he sold the business to CompuServe in 1990.

Mark Cuban is famous for his bold, unambiguous views and mindset, which has a great deal to do with his perpetual success.

He continues to challenge the status quo in the world of media and technology. In 2005, Mark announced he was financially backing the underdog in a U.S. Supreme Court “peer-to-peer” file-sharing case.

“After military service, the most patriotic thing you can do as a wealthy person pays your taxes.”-Mark Cuban

“All TV is now digital. It’s a platform ripe for innovation; we just haven’t seen any beyond picture quality changes. That’s a secular problem.”-Mark Cuban

“Anyone who says he is an expert in the market is lying to you. There is no such thing.”-Mark Cuban 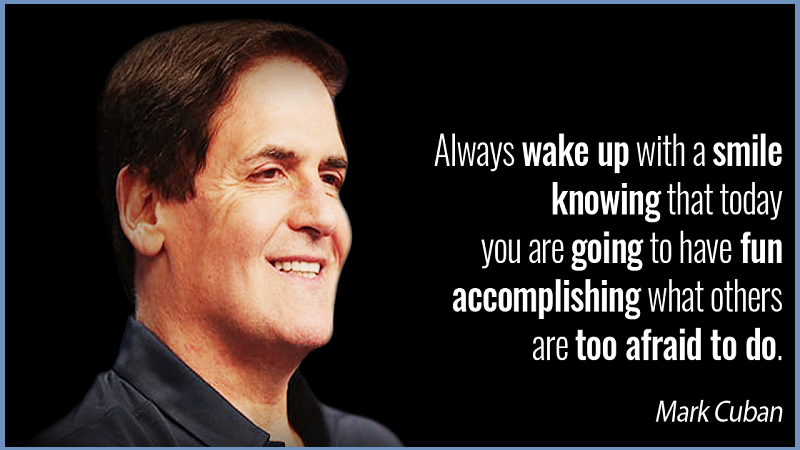 “Automation is going to cause unemployment, and we need to prepare for it.”-Mark Cuban

“Because if you’re prepared and you know what it takes, it’s not a risk. You just have to figure out how to get there. There is always a way to get there.”-Mark Cuban

“Being able to take a traditional cable-television subscriber and give them new widget type applications to me is huge.”-Mark Cuban

zero-sum” game. The more you make, the more of a financial impact you can have.”-Mark Cuban

“But we have to ask ourselves, what’s the purpose of the stock market? It’s supposed to be a source of capital for growing business. It’s lost that purpose.”-Mark Cuban

“Every job in a company is important. Unless you experience a wide range of those jobs, I don’t think you are as well prepared to start and run a company as you could be.”-Mark Cuban 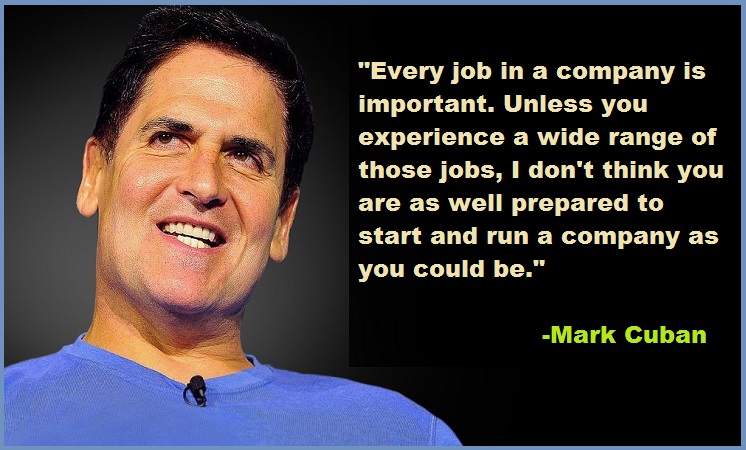 “Go out there and get rich. Get so obnoxiously rich that when that tax bill comes, your first thought will be to choke on how big a check you have to write.”-Mark Cuban

“I am telling you, the world’s first trillionaires are going to come from somebody who masters A.I. and all its derivatives and applies it in ways we never thought of.”-Mark Cuban

“I believe that starting any business should be as easy as a 10-year-old starting a lemonade stand.”-Mark Cuban

“I can’t say it enough that learning how to learn is one of the greatest skills anyone can have. It’s why I advocate that everyone go to college.”-Mark Cuban

“I don’t care what anyone says. Being rich is a good thing.”-Mark Cuban

“I have always been selling. I always had something going on. That was just my nature”.-Mark Cuban

“I have stocked shelves, waited on tables, and bartender.”-Mark Cuban

“I love helping entrepreneurs. It’s something I really have fun doing. It’s like planting a little seed and watching it grow.”-Mark Cuban

“I love being challenged and defending my positions and, when I’m wrong, learning from the exchange. It makes me smarter and better as a businessperson.”-Mark Cuban

“I love to compete. To me, business is the ultimate sport. It’s always on. There is always someone trying to beat me.”-Mark Cuban

“I still work hard to know my business. I’m continuously looking for ways to improve all my companies, and I’m always selling. Always.”-Mark Cuban

“I think Amazon is the greatest start-up and the greatest company in the world. The way they are using new technologies is not just disrupting retail, it’s getting ready to disrupt everything.”-Mark Cuban

“I think he tries to be nice. But he has absolutely zero self-awareness. None. Zip. So we see the public Donald Trump, the candidate, as being different than the in-person Donald Trump.”-Mark Cuban

“I think one of the biggest curses in the U.S. is that we have only two political parties.”-Mark Cuban

“I think political people are afraid of me.”-Mark Cuban

“I think that any reporter or columnist will be a little more careful when doing interviews with me.”-Mark Cuban

“I try not to be an ideologue about anything. If I’m wrong, I’m wrong, and I’m willing to evolve.”-Mark Cuban

“I worked hard and smarter than most people in the businesses I have been in.”-Mark Cuban

“I would rather have the costs of consumer goods and restaurants – products we as consumers can choose to buy or not buy – go up and the need for public services go down.”-Mark Cuban

“If I ran as a Dem, I know I could beat Hillary Clinton. And if it was me vs. Trump, I would crush him. No doubt about it.”-Mark Cuban

“If there was a template for success in sports, everyone would follow it. You do the best you can and trust the people you trust.”-Mark Cuban

“If you can’t admit failure, you’re not an entrepreneur. You are not a good business person. There’s nothing brilliant about what you are doing.”-Mark Cuban

“I’m not a fan of giving to charities. I have a few I support, but the overhead and inefficiencies really bother me. Instead, I pay people’s bills and help solve problems.”-Mark Cuban

“I’m not cut out for politics.”-Mark Cuban

“I’m the one guy who says don’t force the stupid people to be quiet. I want to know who the morons are.”-Mark Cuban

“In my mind, a good leader would say, ‘OK, I need to sit down and talk to the guys who oppose me. Let me let them voice their opinions; let me get their thought process.”-Mark Cuban

“In my opinion, right now there’s way too much hype on the technologies and not enough attention to the real businesses behind them.”-Mark Cuban

“In the past, people used to tell me to shut up a bit. But what I believe is to put out your opinion and let everyone else react. If I’m wrong, I’m wrong.”-Mark Cuban

“I’ve learned the number one job of a pro manager is not to win championships but to keep their job.”-Mark Cuban

“Leaders are not dogmatic. They are principled and know that change is never easy, but when it’s necessary, they must lead.”-Mark Cuban

“Leaders don’t change their positions mid-debate. They welcome scorn from the masses because it creates the opportunity for dialogue.”-Mark Cuban

“Leaders don’t look back to condemn what has already been done; they look forward to creating a better future.”-Mark Cuban

“Liquidity is a good proxy for relative net worth. You can’t lie about cash, stocks, and bond values.”-Mark Cuban

“Make sure you are the boss. I don’t think I would encourage executives that work for me to blog. There can be only 1 public vision for an organization.”-Mark Cuban

“Money is a scoreboard where you can rank how you’re doing against other people.”-Mark Cuban

“None of us have pure thoughts; we all live in glass houses.”-Mark Cuban

“Recessions are the best time to start a company. Companies fail. Others hold back capital. If you are willing to do the preparation and work, it is the best time to invest in yourself and start a business.”-Mark Cuban

“Staying true to who I am was tougher when I first got wealthy. Having great friends kept me grounded.”-Mark Cuban

“Sweat equity is the most valuable equity there is. Know your business and industry better than anyone else in the world. Love what you do or don’t do it.”-Mark Cuban

“Talent without effort is wasted talent. And while the effort is the one thing you can control in your life, applying that effort intelligently is next on the list.”-Mark Cuban

“The first cities to create friction-free enterprise zones will get a lot of entrepreneurial traction.”-Mark Cuban

“The key is having great players. But there are a lot of teams that have All-Stars and haven’t been able to put it together.”-Mark Cuban

“The people I don’t like to work with are people like me. I need people who can complement my skill set, people who can do the nitty gritty with me.”-Mark Cuban

“There is so much partisan and tribal politics, from not just those seeking office but potential voters as well, that we never get real attempts at solutions to problems.”-Mark Cuban

“There’s no law against stupid – I learned that a long time ago.”-Mark Cuban

“To be a billionaire, you have got to get lucky.”-Mark Cuban

“Traditional TV will have to innovate their TV delivery software in new ways beyond just offering their content in an app in order to change the viewing erosion of TV.”-Mark Cuban

“What I do know, at least what I think I have learned from my experiences in business, is that when there is a rush for everyone to do the same thing, it becomes more difficult to do. Not easier. Harder.”-Mark Cuban

“What I’ve learned in these 11 years is you just got to stay focused and believe in yourself and trust your own ability and judgment.”-Mark Cuban

“Whatever you can say in a meeting, you can put in an email. If I have questions, I’ll tell you via email.”-Mark Cuban

“When I die, I want to come back to me.”-Mark Cuban

“When I got to the Mavericks people were all giving me advice – change this, change that – and one thing that I didn’t do was fire anybody.”-Mark Cuban

“When you look at ‘policy wonk’ in the dictionary, the one picture you won’t see is Donald Trump.”-Mark Cuban

“When you turn your team upside down and try to figure out what the culture of the team is, you take the greatest risk a team can take.”-Mark Cuban

“You need to turn over every rock and open every door to learning your industry. This process never ends.”-Mark Cuban