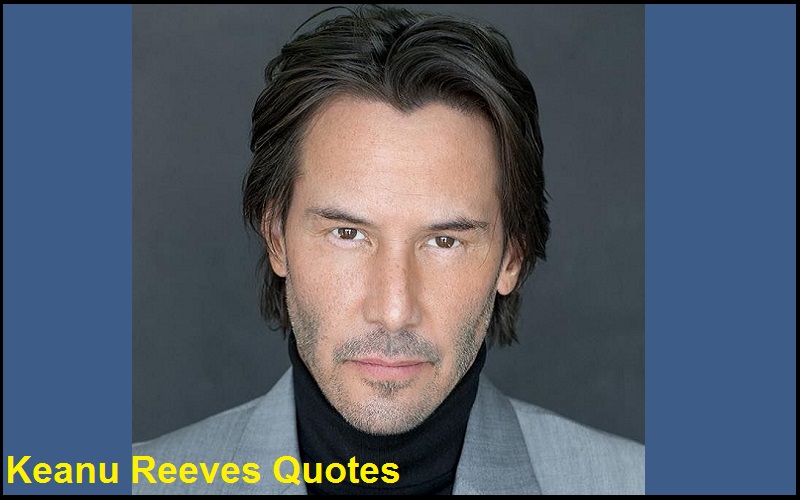 He has also appeared in dramatic films such as Dangerous Liaisons, My Own Private Idaho, and Little Buddha, as well as the romantic horror Bram Stoker’s Dracula.

“The whole aspect of cinema and film festivals should be a moment to come together and celebrate art and humanity. It would be a shame if there was such a divide.”-Keanu Reeves 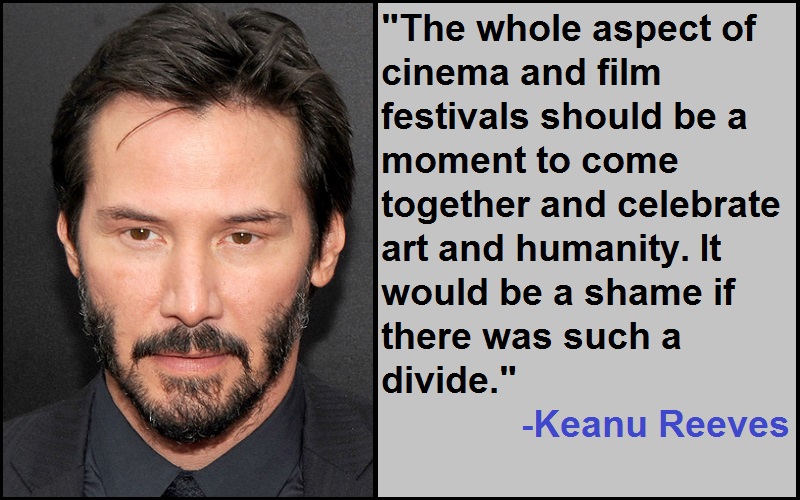 “Sometimes when you make a film you can go away for three months and then come back and live your life. But this struck a much deeper chord. I don’t have the ability yet to speak about it in an objective.”-Keanu Reeves

“I’m a meathead, man. You’ve got smart people, and you’ve got dumb people. I just happen to be dumb.”-Keanu Reeves

“It’s always wonderful to get to know women, with the mystery and the joy and the depth. If you can make a woman laugh, you’re seeing the most beautiful thing on God’s Earth.”-Keanu Reeves

“I’m sorry my existence is not very noble or sublime.”-Keanu Reeves

“I had the classic 40 meltdowns. I did. It’s embarrassing. It was pretty funny. But then I recovered. To me, it was like a second adolescence. Hormonally, my body was changing, my mind was changing, and so my relationship to myself and the world around me came to this assault of finiteness.”-Keanu Reeves

“Sure I believe in God and the Devil, but they don’t have to have pitchforks and a long white beard.”-Keanu Reeves

“I am not handsome or sexy. Of course, it’s not like I am hopeless.”-Keanu Reeves

“The simple act of paying attention can take you a long way.”-Keanu Reeves

“It’s the journey of the self, I guess. You start with this kind of a loner, outside guy, which a lot of people can relate to, and he goes out into the world.”-Keanu Reeves

“How do I confront aging? With a wonder and a terror. Yeah, I’ll say that. Wonder and terror.”-Keanu Reeves

“I believe in love at first sight. You want that connection, and then you want some problems.”-Keanu Reeves

“I don’t know the law, the kind of law of quantity and quality, but I think the opportunity of people being able to express themselves and to have the means of production is a great thing. It’s also changing how we’re telling stories.”-Keanu Reeves

“Basically it starts with four months of training, just basic stretching, kicking and punching. Then you come to the choreography and getting ready to put the dance together.”-Keanu Reeves

“When I don’t feel free and can’t do what I want I just react. I go against it.”-Keanu Reeves

“Falling in love and having a relationship are two different things.”-Keanu Reeves

“When the people you love are gone, you’re alone.”-Keanu Reeves

“Because we’re actors we can pretend and fake it, but I’d rather the intimate investment was authentic.”-Keanu Reeves

“My name can’t be that tough to pronounce!”-Keanu Reeves

“On a good night, I get underwear, bras, and hotel-room keys thrown onstage… You start to think that you’re Tom Jones.”-Keanu Reeves

“I’ve had the opportunity to work with so many great directors. Different styles, as well, like Gus Van Sant. He just does the casting and the milieu and lets you do your thing, quietly. Bertolucci, who can talk to you about your internal world in quite a creative way or just say, ‘Well, put your hand over here.'”-Keanu Reeves

“You want to play another kind of character in another genre, and it’s been something I’ve been trying to do if I can in the career so far, and it’s something I hope to continue because it’s interesting to me and you get to do different things as an actor.”-Keanu Reeves

“I’m not a photographer, so I didn’t get into F-stops or ND filters or background, foreground, cross-light, all that stuff. But I was interested in the camera and the lenses. That’s the world that I’m moving in, in terms of acting and giving a performance.”-Keanu Reeves

“How do people relate to movies now, when they’re on portable devices or streaming them? It’s not as much about going to the movies. That experience has changed.”-Keanu Reeves

“I loved the material when I first read it, and the experience of making the film was a great one. So when we came around to complete the trilogy, I just signed on board without even reading the scripts because the experience of the first film was so good.”-Keanu Reeves

“I have definitely been curious and involved in the process; even as a young actor. I was always looking at where the camera was, what story it was telling. And as my experience grew, I wanted to know even more.”-Keanu Reeves

“And of course, to work with Jack Nicholson and Diane Keaton, and work with a wonderful, beautiful script directed by Nancy Meyers, it was really for me a dream come true.”-Keanu Reeves

“It’s easy to become very self-critical when you’re an actor. Then you get critiqued by the critics. Whether you agree with them or not, people are passing judgment on you.”-Keanu Reeves

“Kissing someone is pretty intimate, actually very intimate, and your heart always kind of skips a beat before you do that.”-Keanu Reeves

“I’m a meathead. I can’t help it, man. You’ve got smart people and you’ve got dumb people.”-Keanu Reeves

“I mean, I went to a Catholic boys’ school for a year, but that was to play hockey. Religion class was quite contentious for me.”-Keanu Reeves

“But, you know, it’s still a drag to get your picture taken when you’re eating a sandwich. It’s a downer.”-Keanu Reeves

“I think – I don’t know, maybe it’s nostalgia. But the choice, losing the choice to be able to use film is going to be – it’s gone. It’s going to be gone.”-Keanu Reeves

“When we talk about how movies used to be made, it was over 100 years of film, literal, physical film, with emulsion, that we would expose to light and we would get pictures.”-Keanu Reeves

“I do think there must be some kind of interaction between your living life and the life that goes on from here.”-Keanu Reeves

“Letters are something from you. It’s a different kind of intention than writing an e-mail.”-Keanu Reeves

“Artists are losing the choice to use film. People have a love for it – the grain, how it feels, the texture.”-Keanu Reeves

“I used to have nightmares that they would put ‘He played Ted’ on my tombstone.”-Keanu Reeves

“The truth is often terrifying, which I think is one of the motifs of Larry and Andrew’s cinema. The cost of knowledge is an important theme. In the second and third films, they explore the consequences of Neo’s choice to know the truth. It’s a beautiful, beautiful story.”-Keanu Reeves

“But I did ‘Bill & Ted’s Excellent Adventure.’ They made a cereal out of it, so once you’ve had a cereal, it doesn’t get much more surreal than that. Surreal cereal.”-Keanu Reeves

“You know what, I’d done an interview show when I was like 16 or 17. One of my first jobs. I did interviews for this television show in Toronto.”-Keanu Reeves

“‘Speed’ and ‘Point Break’ were a lot of running and jumping, and then ‘The Matrix Trilogy’ had a lot of fights and wirework and green screen elements.”-Keanu Reeves

“I’ve been pleased to work with so many wonderful stars throughout the years. This has been an amazing journey. I hope it continues.”-Keanu Reeves

“I have a producing partner named Stephen Hamel, and we’ve been trying to generate material.”-Keanu Reeves