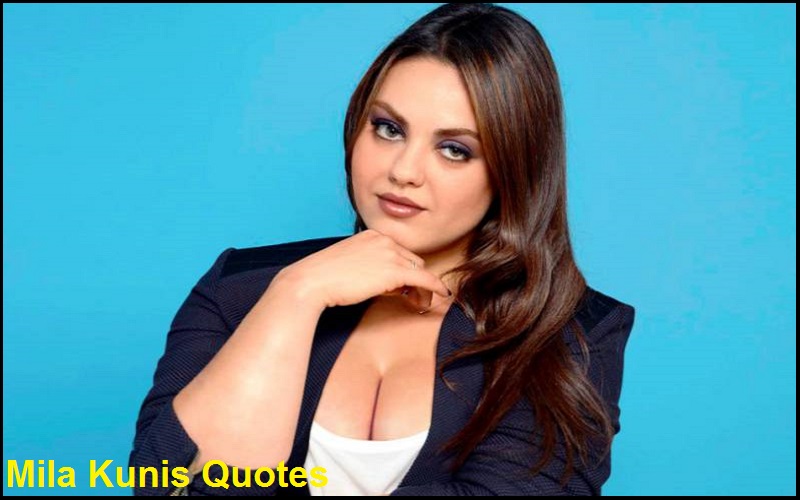 Mila Kunis Quotes:- Mila Kunis (born August 14, 1983) is an American actress. In 1991, at the age of seven, she moved from Soviet Ukraine to the United States with her family.

After being enrolled in acting classes as an after-school activity, she was soon discovered by an agent. She appeared in several television series and commercials, before acquiring her first significant role at age 14, playing Jackie Burkhart on the television series That ’70s Show.

“I wanted to just surround myself with people who I think are better than I am, whether they’re actors or directors or producers so that I could learn from them.”-Mila Kunis 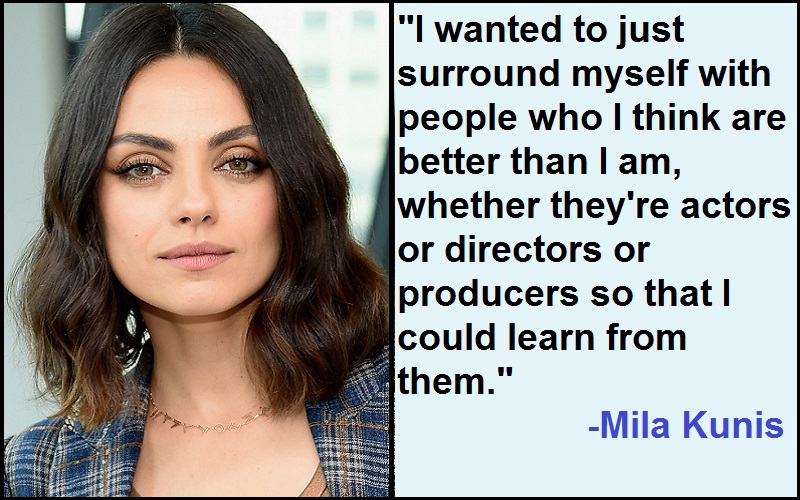 “That is the biggest form of bullying ever, the paparazzi. Printing lies, making accusations, it’s just bullying.”–Mila Kunis

“I had a normal upbringing and went to public school. If I ever, even for a second, started getting a big head, I was brought back to reality pretty quickly. I was working full time and still had to fight for a cell phone.”-Mila Kunis

“I honestly think being single’s great. Being in a relationship’s great. It’s all about the timing.”-Mila Kunis

“My goal in life is to enjoy what I do, and never to look back and say I wish I would have done that, and to go to UCLA, and to become someone great in life!”-Mila Kunis

“People have interpretations of what you’re supposed to be like. If you’re unattractive and overweight, you must have a great personality. If you’re attractive, then you must not be the nicest person. People are always taken aback that I’m easygoing but not necessarily stupid.”-Mila Kunis

“I’m not boring to be around. Something will always happen.”-Mila Kunis

“I don’t think it’s true that blondes have more fun… Trust me, it is not true!”-Mila Kunis

“I’d rather be in love and have a baby than have a movie.”-Mila Kunis

“I had a snowboarding accident. I fell off a horse. I’ve had a concussion, a fractured rib… I walk into walls. I’m always bruised up.”-Mila Kunis

“My mom and my dad wanted my brother and me to have a better life, you know, better education, better jobs. It was probably harder, much, much harder, for my parents. When you’re a kid, you can learn a language much more easily; I learned English in less than a year.”-Mila Kunis

“It’s fun working on the set… I usually work about 10 and a half hours a day, and I also study about five of those hours. It can be tiring, but it’s fun!”-Mila Kunis

“Teens are dealing with the same problems now in the ’90s as they did back in the ’70s, the only real difference is the clothes we wear!”-Mila Kunis

“My dad heard of a studio on the radio, and it was advertised as a place for kids to meet kids, and it was actually a studio, and that’s where I met my manager and agent.”-Mila Kunis

“I have an older brother who is 21 and attends UC Berkley.”-Mila Kunis

30+Quotes from Mila Kunis to Motivate and Inspire You

“I definitely hope to attend UCLA in a year, and major in business.”-Mila Kunis

“I love swimming, tennis, and I am taking up golf. I am not serious about it, I just go to the range and practice. Other than that, I enjoy going to the movies and hanging out with my friends.”-Mila Kunis

“It is difficult because the school I go to, my friends do not attend.”-Mila Kunis

“It’s not the most normal life in the world, but I screw up plenty of times to be a normal teenager.”-Mila Kunis

“Always have a backup plan.”-Mila Kunis

“I’ve definitely grown apart from a lot of my friends. Some of them don’t understand the schedule, and it’s not that I don’t want to talk to them, it’s that sometimes I am really busy and can’t get back to them.”-Mila Kunis

“The thing about ballet that I never knew about is that it’s one of the most excruciating sports that I’ve ever been a part of. I say sports because they train constantly, every single day.”-Mila Kunis

“Sadly, in any industry and in any work-related environment, females always strive to achieve a certain amount of perfection, whether that be skinny or pretty. It’s a constant, in our society.”-Mila Kunis

“I am very much a creature of habit, and I have no life consistency. None.”-Mila Kunis

“I think that an actor is more likely to be forgiven in the public’s eye than an actress.”-Mila Kunis

“I think there will always be a double standard between males and females, so I think that an actress is more likely to protect her public persona, so to speak than an actor would be.”-Mila Kunis

“I think that when a person is insecure about who they are or who they want to be, then it translates on screen, and the choices they make are all about perception.”-Mila Kunis

“I’ve said this before, but after ‘That ’70s Show’ ended, I solely wanted to do films that inspire me and to work with people who make me better. I wanted to just surround myself with people who I think are better than I am, whether they’re actors or directors or producers so that I could learn from them.”-Mila Kunis

“I’ve never dated. I can say this honestly: I don’t know what it’s like to date. But also, how am I going to date? I’m not in one state long enough.”-Mila Kunis

“I love playing different characters and I love doing fun things and I love to entertain people, whether that be in a comedy or a drama. If I get you to laugh or I get you to cry I’m super stoked, as morbid as that might sound.”-Mila Kunis

“Whether you know who Denzel Washington is or you don’t, when he walks into the room, you’re going to pay attention, because he’s just such a powerful man.”-Mila Kunis

“Very rarely am I attracted to characters that are ‘woe is me.’ I’m not a big fan of women that have to be the victim and need to be saved, at all times. I don’t necessarily think that’s how it is, in real life, and I don’t think that’s how it should be in films.”-Mila Kunis

“Family Guy’s got a strong fanbase, man, like no other. It’s great. Everywhere around the world, it’s pretty amazing. It’s amazing that people love ‘Family Guy’ as much as they do. It’s great.”-Mila Kunis

“I stand by every movie that I did. I don’t regret any decision I made.”-Mila Kunis

“I am in a position where I don’t have to work for the sake of working, so I’m very lucky, in a sense. So, I can always sit back and wait for a project that I respond to, that I want to do.”-Mila Kunis

“It’s amazing that people love ‘Family Guy’ as much as they do. It’s great.”-Mila Kunis

“I grew up incredibly poor and went to school and had a very average upbringing.”-Mila Kunis

“I don’t live lavishly, so it’s not like I have 20 assistants and travel privately and shop every day.”-Mila Kunis

“I wanted to quit the industry when I was eighteen and finish ’70s’, finish my contract on the show and go to college because I was pretty convinced that after the ’70s’ and after being on a show for eight years that I would be very much pigeonholed for something specific that I didn’t want to be a part of anymore.”-Mila Kunis