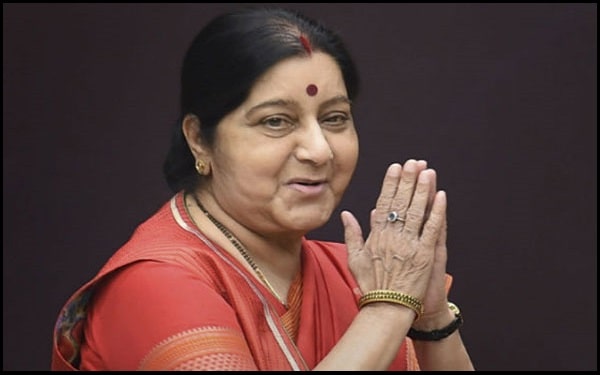 Sushma Swaraj Quotes:- Sushma Swaraj (14 February 1952 – 6 August 2019) was an Indian politician and a Supreme Court lawyer. A senior leader of the Bharatiya Janata Party, Swaraj served as the Minister of External Affairs of India in the first Narendra Modi government (2014–2019). She was the second woman to hold the office, after Indira Gandhi.

“You know that we are against major foreign equity participation in the field of culture and information. This is not only our view in the BJP.”-Sushma Swaraj 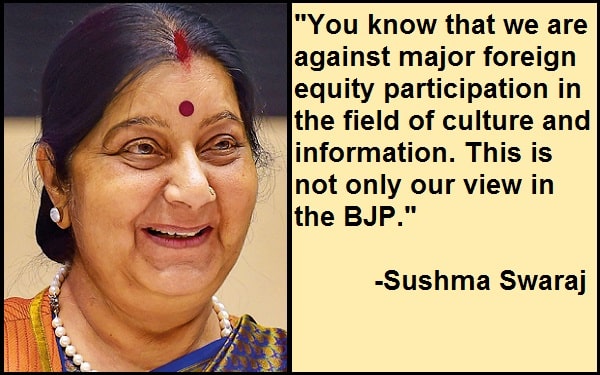 “The question the electorate asks is: ‘What can you do for us? Are you just using us to defeat somebody because you have a personal grievance?'”-Sushma Swaraj

“We have to pick up people’s issues within and outside Parliament and give a voice to their pain and problems and come across as a party that understands this.”-Sushma Swaraj

“The home ministry’s role should be focused on. There are so many items under it today; it has to look after even official languages. There should be a minister looking after internal security, and the remaining things should go under another ministry. Things like official languages can be looked after by the human resources development ministry.”-Sushma Swaraj

“A leader is not born out of the blue. You have to know the pulse of the people from Kashmir to Kanyakumari and from Gujarat to Guwahati. You have to relate yourself with them, and only then does one become a leader.”-Sushma Swaraj

“The BJP is certainly for the empowerment of women.”-Sushma Swaraj

“Wherever Modi has addressed the local Indian communities during his visits to foreign countries, the Indians there are extremely happy. After the prime minister’s visits, the Indians in those countries are feeling a great sense of pride, and the respect for them has increased.”-Sushma Swaraj

“Being a longstanding partner of the Arab world, we in India are also deeply concerned with the rise of fanaticism, extremism, and terrorism in parts of the region.”-Sushma Swaraj

“India continues to be guided by the principles of being non-interfering, non-prescriptive, and non-judgemental. In other words, India remains ready to provide any support but strongly believes that it is for the Arab countries to decide their destiny without any external interference or diktats from outside.”-Sushma Swaraj

“The Ganga remains sacred from Gomukh, its source, to Ganga Sagar, where it enters the ocean. It sanctifies the tributaries, which attain the very nature of Ganga. Similar is Sanskrit; sacred by itself, it sanctifies all that come into its contact.”-Sushma Swaraj

“We must be prepared to extract costs for those who sponsor and support terrorists, who provide them sanctuary, and who, despite their own claimed victimhood, continue to make the false distinction between good and bad terrorists.”-Sushma Swaraj

“Our efforts are to be directed towards narrowing the gap between the study of Shastras and science.”-Sushma Swaraj

“I served as the chairman of the India-Israel Parliamentary Friendship Group for three years, during which I also had the pleasure of visiting Israel.”-Sushma Swaraj

“India has been a longstanding and reliable development partner of Bangladesh.”-Sushma Swaraj

“Why did the Pakistani military attack us on behalf of JeM? You not only keep JeM on your soil but fund them, and when the victim country retaliates, you attack it on the terror outfit’s behalf.”-Sushma Swaraj

“People often ask us what we get by our frequent travel to countries. I want to tell them we do not travel to have fun; we travel to build our relationship with other countries, and it is because of our ties with these countries that we were able to rescue 7,000 people from Yemen.”-Sushma Swaraj

“In our midst, there are nations that still speak the language of terrorism, that nurture it, peddle it, and export it. To shelter terrorists has become their calling card. We must identify these nations and hold them to account.”-Sushma Swaraj

“These nations, in which U.N. designated terrorists to roam freely, lead processions, and deliver their poisonous sermons of hate with impunity, are as culpable as the very terrorists they harbor. Such countries should have no place in the comity of nations.”-Sushma Swaraj

“Terrorism and extremism bear different names and labels. It uses diverse causes. But in each case, it is driven by distortion of religion and a misguided belief in its power to succeed.”-Sushma Swaraj

“Just as ‘Islam’ literally means ‘peace,’ none of the 99 names of Allah mean violence. Similarly, every religion in the world stands for peace, compassion, and brotherhood.”-Sushma Swaraj

“The OIC has a huge responsibility and a great opportunity to lift humanity to a higher level of peace and prosperity and to make this planet a better place, not just for your people but for the rest of the world.”-Sushma Swaraj

“I was a minister in the Vajpayee government. Atalji wanted to do so many things. But, since he was heading a coalition government, he could not do all those things.”-Sushma Swaraj

“I can go to foreign countries, but following the advice of the doctors to stay away from dust, I am unable to visit Vidisha, as mostly it comprises rural areas only.”-Sushma Swaraj

“I have toured my constituency maximum number of times as a member of the Lok Sabha among the MPs from Madhya Pradesh.”-Sushma Swaraj

“If we have to save the world from the adverse effects of climate change, then developed nations must lift the deprived with financial and technical resources.”-Sushma Swaraj

“The world’s biggest challenge comes from the threats of climate change and terrorism. In India’s case, terrorism is not bred in some faraway land but from across our border.”-Sushma Swaraj

“Who can be a greater transgressor of human rights than a terrorist?”-Sushma Swaraj

“People can overlook any shortcoming, but they will not tolerate arrogance.”-Sushma Swaraj

“This is the era of television and media. If you do not raise issues, then people say that the MLA does not speak in the House. You have to play an effective role in the assembly. Raise issues related to your area.”-Sushma Swaraj

“My husband is an opposition MP. Our political alliance may have fallen through, but our matrimonial alliance is intact.”-Sushma Swaraj

“The unhappiest memories are of losing my mother when I was 14. Alter six months, my father remarried. The thought that somebody was taking the place of my mother was unacceptable. It is sad because, after that, my father also changed.”-Sushma Swaraj

“I cannot tell a lie, and I’m very straightforward. Sometimes this hurts people. I’ve wondered if I should change, but I feel more comfortable about myself this way.”-Sushma Swaraj

“If there is an interpreter sitting between two friends, he may be able to translate the words but not the feelings with which I say something.”-Sushma Swaraj

“We believe that when all nations adhere to international rules and norms and when we conduct on the basis of sovereign equality and mutual respect, our nations feel secure, and our economies prosper.”-Sushma Swaraj