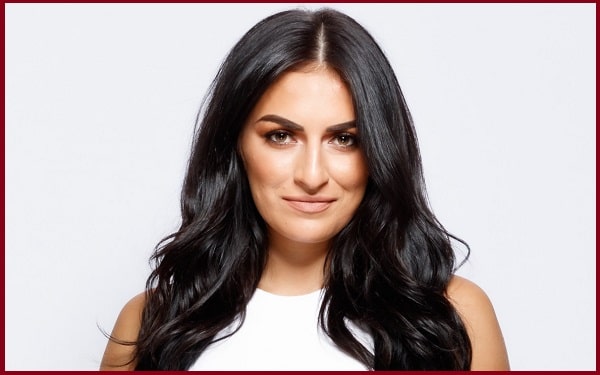 Sonya Deville Quotes:- Daria Rae Berenato(born September 24, 1993) is an American professional wrestler and mixed martial artist. She is signed to WWE under the ring name Sonya Deville, where she performs on the SmackDown brand. 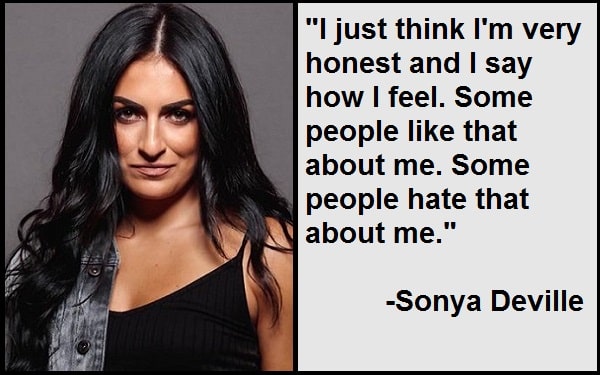 “I think WWE superstars and Divas are here to change lives. That’s why they do what they do. They want to make an impact on the world.”-Sonya Deville

“I have a theory that confidence comes from self-worth.”-Sonya Deville

“My life is amazing. I get paid to hurt people.”-Sonya Deville

“Acting is my love.”-Sonya Deville

“I’m a very passionate person. I’m Italian, it’s in my blood so when I care about something, I get emotional.”-Sonya Deville

“Being a lifelong athlete, I am a firm believer that I am who I am today because of sports. Not only did it give me structure and a solid foundation, but it gave me a sense of failure and how to overcome failure.”-Sonya Deville

“I really want to utilize my MMA knowledge in my WWE performance.”-Sonya Deville

“A good friend of mine, Maria Menounos, she’s kind of like a mentor to me.”-Sonya Deville

“I had so much fun in the ‘Tough Enough’ barracks.”-Sonya Deville

“My MMA background, I think, only enhances my experience on ‘Tough Enough’ or in the WWE in general.”-Sonya Deville

“I’m an athlete. I’m a performer. Why the hell did I never think of combining the two?”-Sonya Deville

“With any minority group, it takes a strong presence in the public eye to make a change because everything nowadays is social media.”-Sonya Deville

“It’s insane how many fans I have from the LGBTQ+ community. I would say the majority of my fanbase are young, gay women.”-Sonya Deville

“I love Daniel Bryan. He’s such a sweetheart.”-Sonya Deville

“I just, I was in such denial within myself for the longest time, just because of the place I grew up in. Like, it wasn’t common. I didn’t know anybody that was gay. I think I had one gay friend in high school and she never even, like, came out. It was just, like, we all just knew.”-Sonya Deville

“I feel like the story me and Ronda can tell one day will be so awesome, and I think we have something special here. I think that it’s going to be an honor and a privilege to work in the ring with her. That’s the biggest compliment, is that Ronda Rousey – she’s done a lot in her life. She’s accomplished a lot.”-Sonya Deville

“As much as we don’t like to admit it sometimes, we are the influencers.”-Sonya Deville

“My goal in talking about my sexuality publicly is just so that a scared little girl or little boy can see me do it and think, ‘wow, if she did it, then maybe it’s OK that I do it.’ It’s to encourage people to be themselves.”-Sonya Deville

“Equality for all is what we should all want, between race, religion, gender, sexuality… it doesn’t matter.”-Sonya Deville

“You can call WWE whatever you want, but at the end of the day, it’s a fight and fighting is my specialty.”-Sonya Deville

“I look up to and have learned a lot from the women before me. With that said, there has never been a woman in this ring with the experience that I have in the fighting.”-Sonya Deville

“Being a part of the LGBTQ community myself, it’s another passion of mine to let my fan base know that I represent another demographic in the WWE.”-Sonya Deville

“To force something that was not organic to who I am was tough on me, and so I can relate to all those girls and guys out there going through the same thing.”-Sonya Deville

“What attracted me to wrestling was the entertainment factor. I loved watching how into the show the fans get, and also how physical it is.”-Sonya Deville

“I think the ability and the knowledge to be able to defend yourself builds confidence. Also, there’s great gratification in the sweat and work you get from any combat training.”-Sonya Deville

“Until I came out publicly, I wasn’t really living my fullest life. I was trying to be who I thought I was supposed to be, which never turns out good, and I wasn’t fulfilled.”-Sonya Deville

“I think no matter what your job title or role in life is, it’s important to just take pride in what you do and do it well.”-Sonya Deville

“Acting has been a passion of mine since I was young, I took acting classes through most of high school and years following while training MMA.”-Sonya Deville

“Let’s just say my phone blew up when I came out on global television. The only people that knew were my immediate family members and my closest friends, maybe like three of them. So you can imagine how many texts and emails and Facebook messages that I got after coming out, most of which were very supportive of the LGBT community.”-Sonya Deville

“I’m the first-ever openly gay female in the WWE.”-Sonya Deville

“I realized – and I think I learned this at a young age – that anything that’s worth anything, you’re going to take a risk to get there and it’s not going to be easy.”-Sonya Deville

“I’ve never dealt with really anything negative in the WWE as a whole, in the locker room, anything.”-Sonya Deville

“My personal life is a big part of who my character is.”-Sonya Deville

“I love being able to share my story to help others relate or cope with their own stuff they have going on at home.”-Sonya Deville

“Sonya is the way she is for a reason and I love enlightening the fans on what those things are because so many people are going through similar experiences and have amazing stories I love to hear and relate to myself.”-Sonya Deville

“It’s important to not have my sexuality define me.”-Sonya Deville

“Spreading the positivity is just as important as telling difficult stories.”-Sonya Deville

“I love every minute of being inside that squared circle.”-Sonya Deville

“We’re all equal and we should treat each other as such.”-Sonya Deville