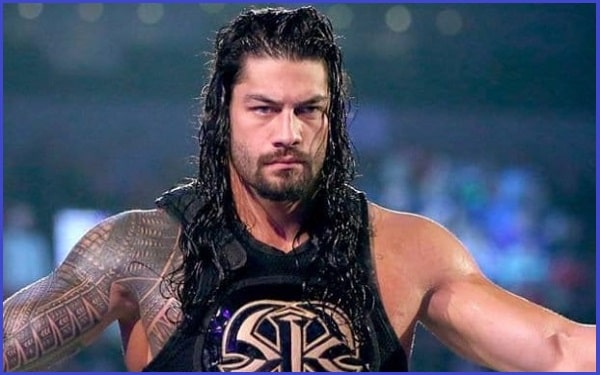 He is part of the Anoaʻi family and is currently signed to WWE as a member of the SmackDown brand under the ring name Roman Reigns.

“I’m doing pretty good for myself, and I’m very proud and very humbled at where I’m at, and I’m extremely blessed.”-Roman Reigns 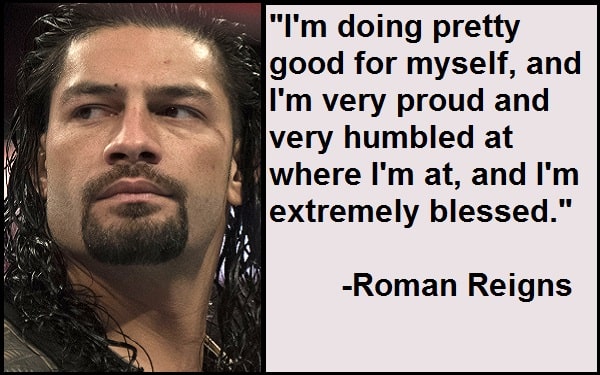 “If you have a good support system like your family and your friends around you, then you can’t go wrong. So just believe in yourself, do you your thing, and stay strong in what you believe in.”-Roman Reigns

“Personally, for my character, I started as the silent but deadly type.”-Roman Reigns

“I can’t say I’m a full-on gamer, since, basically, I just don’t have time for it. I know nowadays, gaming can be a lot like social media. People just stay on it all day long. Like they’re logged into the Matrix. But yeah, I enjoy it. When I get the time.”-Roman Reigns

“I can only do my thing and do the best that I can.”-Roman Reigns

“I’m a workhorse. I’ll take anything and everything I can get, and I’ll do it with a smile on my face.”-Roman Reigns

“My process is walking down to the locker room, laying everything out to how I like it. I’m very particular about setting up my bags and my dressing situation. I love to pull out that portable speaker and blare music even if nobody else likes it. To me, it’s just keeping everything the same every single night.”-Roman Reigns

“When I came into this business, there was a bar set for me. My goal is to push it as high as I can to make my family’s legacy even stronger. To add to the history that’s already been created. So for me, it’s a huge challenge that I’m willing to fight for every single day.”-Roman Reigns

“As an adult, I’ve always tried to be a good person my whole life, so I’ve made good friends, and I’ve always built great relationships and been friendly with people. I always think what you do to others will come to you, so that’s how I treat people.”-Roman Reigns

“Before you know it, I’m not going to be able to tie these boots up and do what I do in the ring for my whole life. We’re all getting older, so I’m trying to live in the moment and enjoy everything that’s being thrown at me.”-Roman Reigns

“I enjoy being a singles guy. I enjoy commanding the stage with myself and an opponent. It’s a different process when you’re teammates. Especially with the way we work. We’re very unselfish about how we work together in so many different regards. Not just what you see as the final product of the match. Just strategizing, psychology, teamwork.”-Roman Reigns

“‘ WrestleMania’ was the best day of my life, the greatest opportunity I’ve ever been afforded, but at the same time, no one wants to lose the main event for the WWE world heavyweight championship.”-Roman Reigns

“It’s always good to see the world; always good to see new places. When I’m sitting at home, one of the great things is when my daughter and I watch TV, and when she sees or hears about a place for the first time, I tell her, ‘Daddy’s been there!'”-Roman Reigns

“Being a WWE performer and doing all the different things we get to do, it can wear on you, and you can learn a lot of stuff about yourself. For me, it always reminds me to just stay humble. Just be yourself, love what you do, and enjoy the ride.”-Roman Reigns

“The majority of the time… the people that are critiquing and bashing me, they’re making me more relevant, I would think. If you didn’t want me around, then just don’t talk about me, and try and make it silent out there.”-Roman Reigns

“I always think there’s something you can learn.”-Roman Reigns

“A lot of people tune in to ‘Monday Night Raw,’ and they can hear these boos or these mixed reactions, but they’re not there for our Friday live event show, our Saturday show, our Sunday show. I get to experience a lot of very supportive nights where everybody is on my side.”-Roman Reigns

“I don’t have anything to prove to anybody else other than myself and my supporters and my loved ones, so if my health is good, I’m going to go out there and kill it.”-Roman Reigns

“If it wasn’t for women, I wouldn’t be here. I’m a mamma’s boy at heart. I love my mom. I have the deepest, utmost respect for women.”-Roman Reigns

“It takes a very tough man to play defensive line at any level of football but to be able to do it on a Division 1 level, or a professional level, it takes that intensity, that aggression, and you have to be tough.”-Roman Reigns

“There’s always something that you can learn and something you can teach.”-Roman Reigns

“Just being involved in WrestleMania is a dream.”-Roman Reigns

“For the most part, I don’t care what Dolph Ziggler is doing or that Seth Rollins worked out. I don’t wanna watch a video of Cena power cleaning.”-Roman Reigns

“There are so many great matches that you can think of. I could fantasy book all kinds of stuff, you know, fight a few family members. If we could have Umaga back, I would love to wrestle him in any arena in any town just because of how good he was.”-Roman Reigns

“This whole wrestling world is a different breed, there’s no doubt.”-Roman Reigns

“You never know what’s going to happen with this crazy world of sports entertainment, so I would never rule out the fact that Rock wants to come home.”-Roman Reigns

“I’m not the only guy who doesn’t have an independent wrestling background. You know, I have a football background, but I also have a wrestling one.”-Roman Reigns

“Growing up, I’ve had plenty of obstacles, but to be honest, I didn’t always have doubters. I was a standout athlete, so when that happens, you don’t have too many people telling you ‘You can’t do this,’ and ‘You can’t do that.’ I’ve always been a bit of a people person and a hard worker.”-Roman Reigns

“There is always the underground rapper people enjoy, and you want to see him come up. That’s kind of how it is in wrestling.”-Roman Reigns

“I’m not a crazy Twitter guy to where I’m tweeting out stuff every day, and rarely even once a week do I tweet. But I mean, occasionally, I read some stuff.”-Roman Reigns

“My father and a bunch of my cousins and uncles, they didn’t have the opportunity to use FaceTime or Skype, all these different technologies and advancements that we have.”-Roman Reigns

“I’m a family man. I have a daughter and a wife, and I spend more time on the road with my wrestling family than I do with my actual household and my immediate family.”-Roman Reigns

“This is the deal: You win the Royal Rumble match, you go to main event WrestleMania. That’s the process.”-Roman Reigns

“I’m a character and a sports entertainer and a wrestler, but I’m also a father and a husband and a provider.”-Roman Reigns

“I get to partner up with all different types of opportunities.”-Roman Reigns

“I used to be a lot better looking before I joined WWE. Whatever happens in the ring is real, and for anyone to think any differently would be a big mistake.”-Roman Reigns

“For anyone to say that WWE is fake or anything like that, no sir! It’s very physical, and the injuries are real; the blood is real.”-Roman Reigns

“You can type things on the Internet. You can have no credentials in any area and just get on your smartphone and write whatever you want.”-Roman Reigns