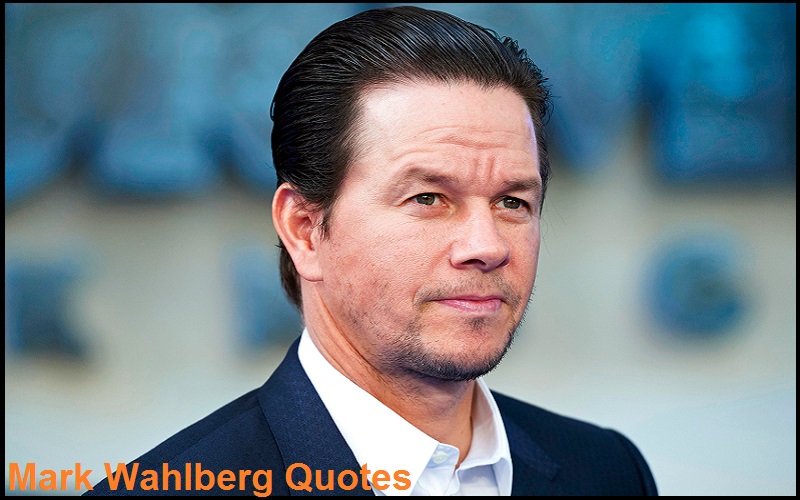 He is also known by his former stage name Marky Mark, from his early career as frontman for the group, Marky Mark and the Funky Bunch, with whom he released the albums Music for the People and You Gotta Believe.

“I work as hard as anybody will ever work and I like that. That’s why I’ve been successful and that is when I feel good about myself. If I do my damnedest and don’t succeed, I feel good about the effort.”-Mark Wahlberg 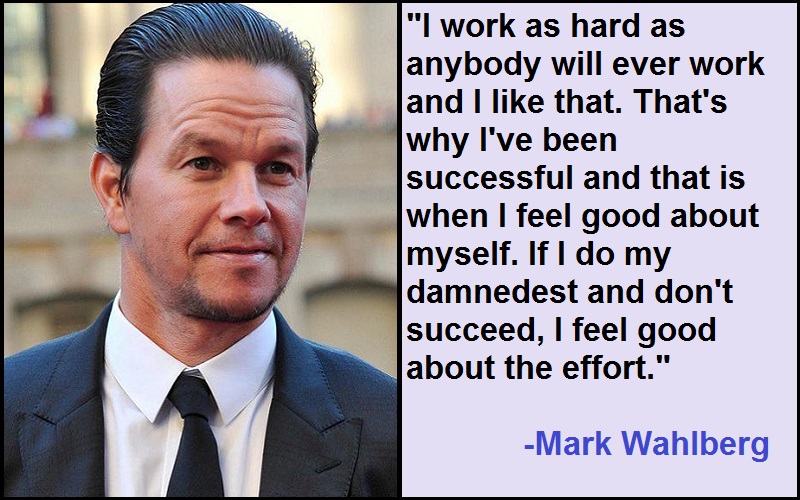 “You know, there’s nothing like seeing the smile on my kids’ faces. Laughing together. Playing. It’s the best.”-Mark Wahlberg

“Look, if you’re driving down the highway at 120 miles an hour, I’d rather be behind the wheel than in the backseat.”-Mark Wahlberg

“I work out Monday, Tuesday, Wednesday; take Thursday off; then I work out Friday and Saturday. So sometimes I’ll eat whatever I want on Thursday, like a big breakfast of pancakes and bacon and eggs and stuff. You can eat a big, hearty breakfast because you’re going to burn off most of it during the day anyway.”-Mark Wahlberg

“I’ve always wanted to do right in life. But the wanting and the doing aren’t quite the same things.”-Mark Wahlberg

“Having two daughters changed my perspective on a lot of things, and I definitely have a newfound respect for women. And I think I finally became a good and real man when I had a daughter.”-Mark Wahlberg

“In my movies, I’m not trying to erase any old image of myself, really. And also I’m not trying to imitate anyone or follow in their footsteps, because I know, Burt Reynolds was just one of the people that told me this, I know how you can only last in this business if you got something special to offer, just by being yourself.”-Mark Wahlberg

“There’s nothing like seeing the smile on my kids’ faces. Laughing together. Playing. It’s the best.”-Mark Wahlberg

“And I tell you, having girls has made me a much better man. I have friends who are fathers, but they only have boys, and they have the same attitude toward women they always had, you know? And I don’t play that… My girls, you mess with them? I will bury you underground.”-Mark Wahlberg

“He’s a legend and I respect his work, so I went down and paid my respects when Charlton was on the set. He was nice but I think he lied a little. He said it was an honor to be in a movie with me, but I don’t believe it.”-Mark Wahlberg

“Women don’t get the credit they deserve.”-Mark Wahlberg

“Immortality… Is that a superpower?”-Mark Wahlberg

“But no, I’m not political. My obligation is to pull the lever and elect somebody who’s going to make life a little better for everybody, especially those who don’t have as much good fortune as others.”-Mark Wahlberg

“A lot of people tend to chew up the scenery. I’m a firm believer in less is more, especially on the big screen.”-Mark Wahlberg

“I’ve always wanted to be in the health and wellness business. I try to encourage people to live a healthy lifestyle.”-Mark Wahlberg

“I like to talk to people. I’ve got one assistant, one Blackberry. That’s my overhead. I don’t text that much or email. I like to sit down face-to-face and have a conversation with you. I’m old-fashioned.”-Mark Wahlberg

“As far as I’m concerned, there’s no job more important on the planet than being a mom.”-Mark Wahlberg

“Well every moment, every project is different. I took a very slow approach to act, trying to really work with people I could learn from. And I got something different out of each experience.”-Mark Wahlberg

“For me, family always comes first; I would do anything to protect them.”-Mark Wahlberg

“I have more money now than I know what to do with.”-Mark Wahlberg

“If I succeed in business but fail as a father, then I’ve failed.”-Mark Wahlberg

“I love roles where I am required to prepare physically. And it’s fun putting on weight and eating.”-Mark Wahlberg

“A lot of talented actors still have to pay their bills.”-Mark Wahlberg

“Being a Catholic is the most important aspect of my life.”-Mark Wahlberg

“I’ve always been into working out and eating healthy. That’s just who I am.”-Mark Wahlberg

“It’s all about hustling, whether it’s in Boston or the film industry. I’ve been hustling my entire life – acting my way into trouble and acting my way back out again. I’m just fortunate to have had the opportunity to apply it in a different direction.”-Mark Wahlberg

“I never lie. I believe everything I say, so it’s not a lie.”-Mark Wahlberg

“All that running around in my underwear put money in my pockets. I can focus on working in interesting movies without having to worry about supporting myself.”-Mark Wahlberg

“Clooney is just a pretty boy, man, and that’s it, OK? I carried him on my back long enough. I’m on my own.”-Mark Wahlberg

“The world is very different today than it was in 1968.”-Mark Wahlberg

“When I was a rapper, the groupies didn’t have to try too hard with me. Just show up at the hotel.”-Mark Wahlberg

“I’ve always looked at my career as an athlete would look at his. I won’t play forever. Some don’t know when to walk away, but the smart ones do.”-Mark Wahlberg

“I don’t wanna hear nobody complain that they’re getting paid all this money and people won’t leave them alone. It’s part of it.”-Mark Wahlberg

“The environment I was raised in, you had to, to survive.”-Mark Wahlberg

“I don’t go to Mass every day. But I go to church every day. Just sitting there, thinking – it’s a great way to start the morning, you know? You feel so good coming out, and your approach to everything is suddenly really clear.”-Mark Wahlberg

“It’s funny because when you’re younger you’re in a rush to be 18 or 21 or whatever. But then you hit 30. And now, the days go by like hours. You think, 40, man, this could be the halfway point. It could be the three-quarters point, you know? Who knows?”-Mark Wahlberg

“I’ve been in enough movies to know that when you’re on the set and you start shooting, you’re looking at playback and you get a sense of what it’s going to be like.”-Mark Wahlberg

“I want people to come to see my films and enjoy them but at the end of the day, you can’t control what people think.”-Mark Wahlberg

“I can always see something of myself in the characters I play.”-Mark Wahlberg

“James Cagney, Steve McQueen, I loved all those guys. I grew up loving the movies but had no desire to be in them.”-Mark Wahlberg

“I’m the father of two boys and two girls, so I’m more an emotional wreck than a mushball.”-Mark Wahlberg

“I love being on sets with very seasoned directors as well as very new directors. Every time is a discovery process. You learn something new every time.”-Mark Wahlberg

“I approach a comedy the same way I do a drama. I try to make it as real as possible.”-Mark Wahlberg

“As soon as I ended up being incarcerated, I said, you know, this is not the life for me.”-Mark Wahlberg

“The only thing I don’t like about acting is that it takes so much time away from my family. Otherwise, I don’t have any complaints.”-Mark Wahlberg

“I’m always friendly and encouraging on set. I want people to be at their best creatively.”-Mark Wahlberg

“I like to do projects I feel some connection to.”-Mark Wahlberg

“My sons and I thoroughly enjoy Legos. We go to the toy store every week for more. I never want to take what we build apart; I want to put it on a shelf. My wife is starting to get a little annoyed with the Legos lying around.”-Mark Wahlberg

“I’ve got a pretty wide range of stuff that I’m interested in life. But producing… it gives me a lot more time at home to spend with my family as opposed to being away on location shooting nights for months at a time.”-Mark Wahlberg

“I never got on the course with my dad, but to be playing golf with my kids – that’s a dream.”-Mark Wahlberg

“There aren’t really many compliments flying around with me and my friends. It’s a lot of tough love. But you know, that love is there, and if you need to have a serious conversation, you just gotta wait for the right time to do it.”-Mark Wahlberg

“I’m fortunate that my job gives me the motivation to be as fit as possible. I wound up in a profession that requires physical and mental preparation, so I get to prepare like an athlete for everything I do. I’m living the dream, man.”-Mark Wahlberg

“I have a lot of real-life experience that I can draw on. And I think that shows in the characters that I play because I’m always trying to find somebody – or find characters to play that I can identify with on a personal level or relate to. And I think it makes for a little bit more of an honest portrayal.”-Mark Wahlberg