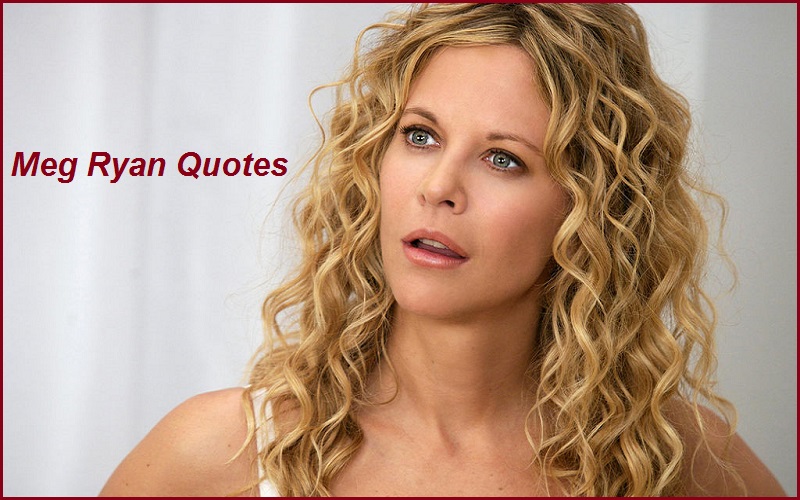 Meg Ryan Quotes:- Meg Ryan (born November 19, 1961) is an American actress and producer. Ryan began her acting career in 1981 in minor roles before joining the cast of the CBS soap opera As the World Turns in 1982.

Subsequently, she began to appear in supporting roles in films during the mid-1980s like a box office hit Top Gun, achieving recognition in independent films such as Promised Land before her performance in the Rob Reiner-directed romantic comedy When Harry Met Sally …(1989) brought her widespread attention and her first Golden Globe nomination.

“When I wear high heels I have a great vocabulary and I speak in paragraphs. I’m more eloquent. I plan to wear them more often.”-Meg Ryan 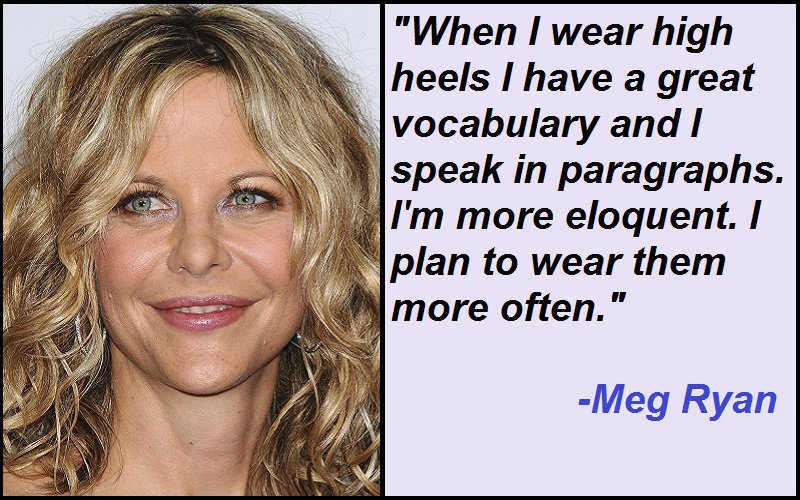 “It would be really great if people would realize that stars are only people with the same weaknesses and flaws, not immaculate idols.”-Meg Ryan

“I have a very good life, so I have nothing to complain about. Sometimes, I just have existential angst.”-Meg Ryan

“I heard that chivalry was dead, but I think it’s just got a bad flue.”-Meg Ryan

“Neither of us, me nor Dennis, is cavalier about a breakup. We both behaved very honorably.”-Meg Ryan

“What brings people down is the same thing over and over.”-Meg Ryan

“My family responsibilities don’t conflict with my career. Not at all.”-Meg Ryan

“Motherhood changed me because it is so fundamental what you’re doing for another person. And you are able to do even though it takes a lot.”-Meg Ryan

“The best thing about modern living is anesthesia.”-Meg Ryan

“I’ve been in this business for years and I’m still befuddled by the ways of this town.”-Meg Ryan

“I’m a sucker for a funny script. And then, as soon as I don’t wanna be, one comes along and grabs me.”-Meg Ryan

“I wouldn’t have thought of myself as a person who could guide anybody and then it turned out that I can.”-Meg Ryan

“And who cares, five years down the road, what most movies made or didn’t make? If it’s good, it stands up.”-Meg Ryan

“Clearly romantic comedy is my franchise genre, I don’t mind saying that, it’s true. I love doing them and hopefully always will do them.”-Meg Ryan

“Acting is what I do. It’s not what I solely define myself as.”-Meg Ryan

“People are always telling me that change is good. But all that means is that something you didn’t want to happen has happened.”-Meg Ryan

“It was not a healthy marriage for a long time. It was never about another man, it was about what my and Dennis’s relationship could not sustain.”-Meg Ryan

“And the insidious thing is that people will either see a movie because it did well last weekend or won’t see it because it didn’t do well.”-Meg Ryan