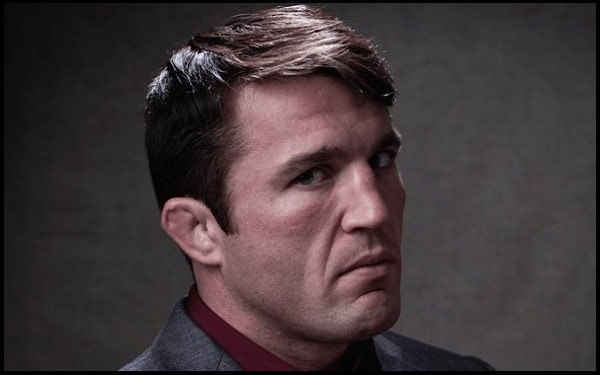 Beginning his MMA career in 1997, Sonnen competed for the UFC, where he became a top challenger in both the light heavyweight and middleweight divisions and challenged for both the UFC Light Heavyweight and UFC Middleweight Championships. 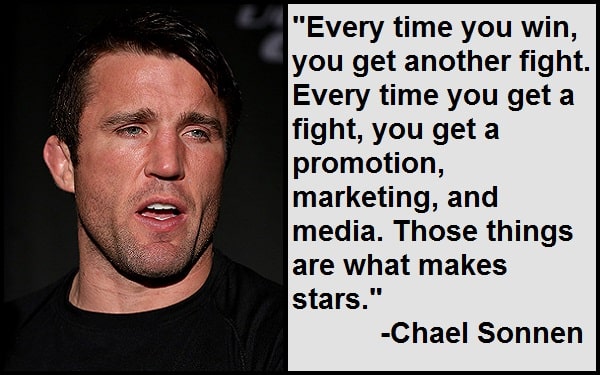 “All medicine is made to make you better. If it did the opposite, it would be malpractice.”-Chael Sonnen

“All sin and all crime come from the same thing: ‘I decided. I decided this was okay.'”-Chael Sonnen

“You can never have the comeback if you don’t have the retirement.”-Chael Sonnen

“Accosting somebody in public can be regrettable. Accosting a gangster can be hazardous.”-Chael Sonnen

“I was in Las Vegas when the Nogueira brothers first touched down in America. There was a bus – this is a true story. There was a bus that pulled up to a red light, and Little Nog tried to feed it a carrot while Big Nog was petting it. He thought it was a horse. This really happened.”-Chael Sonnen

“My ideal fight would be against the smallest guy with the most atrocious record in the largest venue for the most insane paycheck. I love easy fights.”-Chael Sonnen

“Triangle chokes are the refuge for cowards. I would never stoop to that level of locking my legs around a man and squeezing.”-Chael Sonnen

“There’s a camaraderie that comes with this sport, but fighting Anderson Silva is a lot like eating Chinese food: twenty minutes after I do it, I’m going to want to do it again.”-Chael Sonnen

“I don’t walk around looking into cameras and telling people I’m the best fighter in the world just to hear myself talk. I say it for the same reason they put warnings on packages of cigarettes, and fighting may be hazardous to one’s health.”-Chael Sonnen

“Guys always get jealous or envious of an opportunity, but they never wanna walk out to the mound and point to the crowd and tell them where they’re going to hit the ball. I will. I’ll call my shots.”-Chael Sonnen

“Because of both hipster culture and Facebook culture, the human race is starting to resemble a school of hairy piranhas.”-Chael Sonnen

“When I was young, they used to call me ‘foreman,’ not because I was in charge, but because I did the work of four men.”-Chael Sonnen

“I’ve been in a position where I’ve been barely doing any damage, and the ref stopped it. It’s just sport.”-Chael Sonnen

“Brock Lesnar made a career out of refusing to do media and not being accessible.”-Chael Sonnen

“I’m a tournament guy; that’s what I grew up doing.”-Chael Sonnen

“All our careers end the same: Facedown and embarrassed.”-Chael Sonnen

“Fans don’t even know what they want at times.”-Chael Sonnen

“The fight takes 15 minutes. The build-up takes 90 days. It takes that for a reason.”-Chael Sonnen

“I’ve competitively boxed. It’s definitely Plan B for me, but I know how to box.”-Chael Sonnen

“Georges St-Pierre is the greatest fighter to have ever done it.”-Chael Sonnen

“The soreness you feel after a fight or after a good battle, it’s the best feeling in the world. You might sit and complain about it, but you feel so accomplished.”-Chael Sonnen

“Werdum’s open to being knocked out in any fight because he’s so reckless, but that’s also what makes him so damn dynamic.”-Chael Sonnen

“The very normal trajectory of a fighter’s career – you start out fighting at the YMCA. You move on to the dog park. You get into a coliseum. On your way out, you go back to the YMCA, and when you finish up at the dog park.”-Chael Sonnen

“People bring it up to me: ‘Well, you’re only in your spot because you can talk well.’ Okay, first off, you could be right. But second, what – am I supposed to apologize for this? No.”-Chael Sonnen

“The greatest form of expression – or, at least, the most common that we have as human beings, what separates us from the animals – is speaking: the ability to communicate.”-Chael Sonnen

“One element of wrestling that I know what I grew up with we put a lot of emphasis on was the takedown. But, you could win an Olympic championship and never score a takedown, and I don’t know if MMA fans are even aware of that.”-Chael Sonnen

“Wrestlers tend to do good in MMA because they tend to be just some tough guys. It’s not a karate situation where they grew up their whole life punching the air; in a wrestling situation, you grab a hold of another human being every day.”-Chael Sonnen

“What you don’t want is for somebody to not care. Whenever they have no feeling at all, that’s bad. Even if they kind of like you or they kind of don’t, that’s also bad. It’s got to be a strong emotion one way or the other.”-Chael Sonnen

“For me, I prefer to be the heel.”-Chael Sonnen

“I want to make the UFC money.”-Chael Sonnen

“The UFC does not owe me a thing. Nothing. I am in debt to them.”-Chael Sonnen

“Lance Armstrong did a number of things, and he gave himself cancer.”-Chael Sonnen

“I see a lot of people try to come out and copy me, duplicate me, and give it the old college try, but at the end of the day, there’s only one “-Chael Sonnen.”-Chael Sonnen

“I’m a God-fearing man, go to church every Sunday, and have since I was a boy. But if I ever found out that God cared one way or another about a borderline illegal fist-fight on Saturday night, I would be so greatly disappointed that it would make rethink my entire belief system.”-Chael Sonnen

“If you call a Brazilian out publicly, you’re going to be fighting that Brazilian. That’s in their culture.”-Chael Sonnen

“I’ve suffered rib injuries, but I’ve never had a broken one. I’ve dislocated it and popped it, and even that, a big step down from broken, it hurts so bad. But you can’t really move. You can’t even fully breathe and take a deep breath of air.”-Chael Sonnen

“I will not pretend to be something that I’m not. I certainly won’t do it to win the audience over.”-Chael Sonnen

“Every time you have a huge fight in wrestling, in boxing, in MMA, both guys are sure they’re going to win. They really believe it.”-Chael Sonnen

“Jose Aldo, this guy’s a chicken. I can’t even tell you how good Jose Aldo is, but he doesn’t think it.”-Chael Sonnen

“When Georges St-Pierre retired and Jon Jones was absent, I had Jose Aldo, the No. 1 pound-for-pound fighter in the world. That’s how highly I think of him.”-Chael Sonnen

“I think I can beat any man.”-Chael Sonnen

“Nobody wants to fight Brian Stann. I’m not the only guy, and that’s not a big secret.”-Chael Sonnen

“Jon Jones’ skill set is unique. Jon Jones goes out there and does video game moves that the announcers can’t even call because they’ve never seen them before.”-Chael Sonnen

“Ronda’s a very basic and straightforward fighter. However, she’s a masterful competitor.”-Chael Sonnen

“Cain Velasquez, for my money, is the most intimidating force ever in heavyweight combat.”-Chael Sonnen

“I don’t want to be an also-ran.”-Chael Sonnen

“We start to decline as humans and, particularly, as athletes right around 25 years old. If you’re really lucky, you might push that to 27 or 28.”-Chael Sonnen

“I’m candy-coated poison, and you should not believe anything else.”-Chael Sonnen

“Sports are something that, for the most part, are for kids, and if you’re able to extend your career, you’re very lucky.”-Chael Sonnen