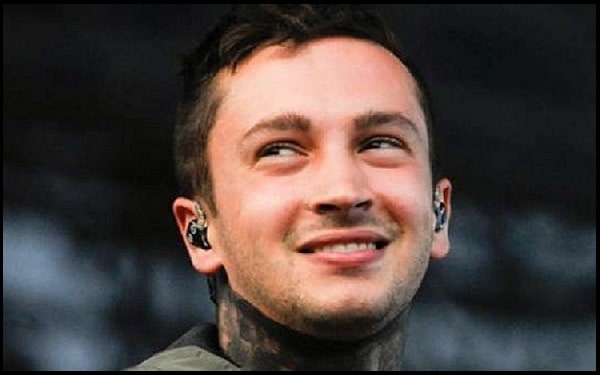 Tyler Joseph Quotes:- Tyler Joseph (born December 1, 1988) is an American singer, songwriter, musician, rapper, and record producer. He is best known as the frontman for the musical duo Twenty One Pilots, alongside bandmate Josh Dun.

Joseph was also a solo artist for some time and released an album titled No Phun Intended in 2008. As a member of Twenty One Pilots, he has been nominated for six Grammy Awards, of which he has won one.

“Music can connect people on an intimate level. What Josh and I are trying to do is represent anyone who has some of the questions that we have.”-Tyler Joseph 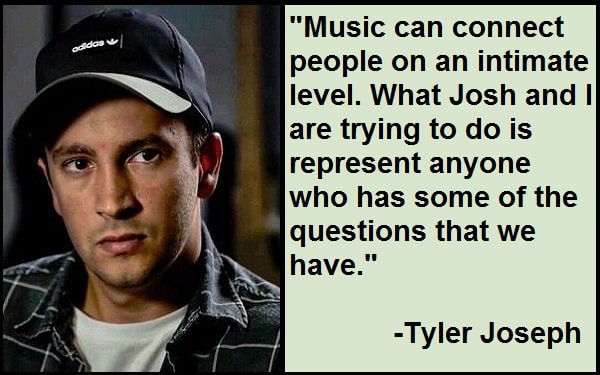 “A lot of things you do to cover up insecurities can be just as harmful to you as anything else.”-Tyler Joseph

“It’s all right to fail. You just have to get up again and try. That’s the bottom line.”-Tyler Joseph

“Insecurity, for me, feels like the sensation of suffocating.”-Tyler Joseph

“By the time you do what somebody else is doing, everybody has moved on to something else.”-Tyler Joseph

“Blurryface is this character that I came up with that represents a certain level of insecurity.”-Tyler Joseph

“We’re constantly faced with decisions. A lot of times, the right ones take more work; it takes longer to see the benefit: they’re the long route.”-Tyler Joseph

“You hear about our conservative background and know that we’re Christian guys, but we’re not timid at all. I will take anyone on when it comes to outworking them or putting on a better show or standing up for people who are being put down.”-Tyler Joseph

“Even if it’s a horrible venue – a bar that barely has a PA and no lighting – we’re still there trying to get somebody to not forget us.”-Tyler Joseph

“The lyrics are a lot about those big questions: why are we here, how did we get here, what’s the point, and what’s next. When those questions come up with fans, I would absolutely share with them what has helped me and where I stand on what it is that I believe.”-Tyler Joseph

“You have to give them something where they walk away and say, ‘I want more of that.’ To create something like that, you have to take them on a journey. So the live show is very important to us; we’ve been working on that a lot.”-Tyler Joseph

“I don’t love the way I look. Nobody does, and if they do, I don’t want to be that person’s friend. But we all know what we’re insecure about. The question I had as I was writing was, ‘How are these things affecting the way I live? How am I compensating because I don’t like this about myself? What do I do to cover it up?'”-Tyler Joseph

“Radio is a hungry monster that eats very fast.”-Tyler Joseph

“I like candles. It helps cover up for the fact that I have four male roommates.”-Tyler Joseph

“I always wrote with some kind of angle of ignorance. I didn’t know what was right or wrong.”-Tyler Joseph

“We do things differently. You don’t have to worry about being part of a particular genre. You just go for it.”-Tyler Joseph

“Here in Ohio, the hardcore scene is a big thing, so some of our good friends are in hardcore bands. So we’ve had to figure out how the heck we get these people to respect us.”-Tyler Joseph

“I think throughout the day; there are always lines or certain words, and I’ll just keep notes on my phone. It might just be one or two words, and then that could inspire a whole song, lyrically.”-Tyler Joseph

“Our palette is wide and eclectic. That’s why we crank out a lot of different styles. To some people, it makes us seem disjointed or scattered. But when we play live, it makes sense to us.”-Tyler Joseph

“Growing up, money is important. And now I have a career where I’m making enough money to live. But I really want to give it to my parents, my family, charities, and people around me.”-Tyler Joseph

“Josh is the guy in the band who’s just so friendly and super, wanting to walk up to you and say, ‘Hey, I’m Josh. I drum in this band, and I’m a big fan of you, and I really appreciate what you do.’ Josh has all these great friends in the industry now.”-Tyler Joseph

“Some people would look at a backing track as something that would confine you, but it really frees us up. It’s nice not to be strapped down to a certain spot when you’re trying to put on a show.”-Tyler Joseph

“We come from a sensory-overload culture, and so we wonder if one guy on drums and one guy dancing around is enough. Adding guys was something we always were curious about. We decided for this run specifically to stay a two-piece. In the future, we definitely could add members.”-Tyler Joseph

“We just want to outdo ourselves every time we come back somewhere.”-Tyler Joseph

“Our moms accuse us of selling out all the time, so we’re still trying to cope with that. They claim to be true fans like they’ve been there from the beginning, and they think that we’ve kind of, like, changed as humans.”-Tyler Joseph

“I’ve forgotten what it feels like to be in one place for more than a day… But we signed up for this. This is our dream. We sat down and said this is what we want to do, play music and touring.”-Tyler Joseph

“If I were to give advice to someone that just started a band and how to get someone’s attention, you’ve gotta have a central hub. For us, it was Columbus, Ohio.”-Tyler Joseph

“We’re not the first people to climb up something or do a backflip during a set, but we want to do something that gets people’s attention.”-Tyler Joseph

“Sometimes you go to a show, and you see someone and think they’re not there right now. They’re performing, but it’s muscle memory. There is no memorizing some of the ways we put on a show.”-Tyler Joseph

“It is true that if you hear our music described, it sounds unappealing. I used to laugh and agree with people when they said it didn’t make any sense.”-Tyler Joseph

“I didn’t know that there were many rules in music when I first started writing.”-Tyler Joseph

“It doesn’t matter what we post about ourselves on social networks or how many times we play live TV, even. It’s all about those people, those fans who are telling other people about us.”-Tyler Joseph

“Writing songs is kind of like a wrestling match for me. You have to pin it down and make it do what you want it to do.”-Tyler Joseph

“It’s hard not to be affected by the live audience.”-Tyler Joseph

“I had to take 500 shots every day, and when my mom wasn’t looking, I’d get up close to the basket and do lay-ups and count them, and she’d be at the back window at the kitchen and knock. Then I’d have to go back and shoot for longer.”-Tyler Joseph

“We’re past the self-doubt. We just have fun with it and just try to make the best music that we can make.”-Tyler Joseph

“For us, we make a song, and if we like it, it goes on a record.”-Tyler Joseph

“We know in order to get where we want to be and do what we want to be doing, sometimes we have to do what we don’t feel like doing. It takes hard work, and the band name is a constant reminder of that.”-Tyler Joseph

“A lot of bands have an unfortunate past; we’ve dodged a lot of bullets when it comes to that.”-Tyler Joseph