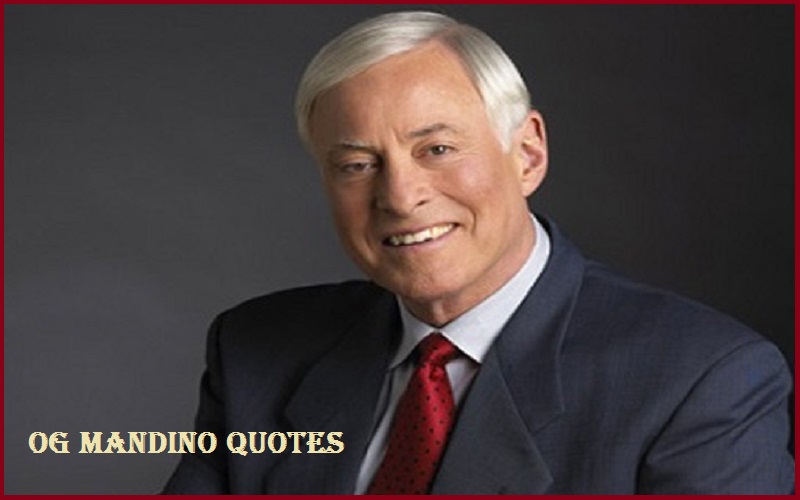 Og Mandino Quotes:- Og Mandino (December 12, 1923 – September 3, 1996, was an American author. He wrote the bestselling book The Greatest Salesman in the World.

His books have sold over 50 million copies and have been translated into over twenty-five different languages. He was the president of Success Unlimited magazine until 1976 and was an inductee of the National Speakers Association’s Hall of Fame.

Mandino was once the editor of his high school paper and planned to attend the University of Missouri’s journalism school. In the summer of 1940, before he entered college, his mother died from a massive heart attack. He decided to work in a paper factory until 1942.

“Beginning today, treat everyone you meet as if they were going to be dead by midnight. Extend to them all the care, kindness, and understanding you can muster, and do it with no thought of any reward. Your life will never be the same again.”-Og Mandino 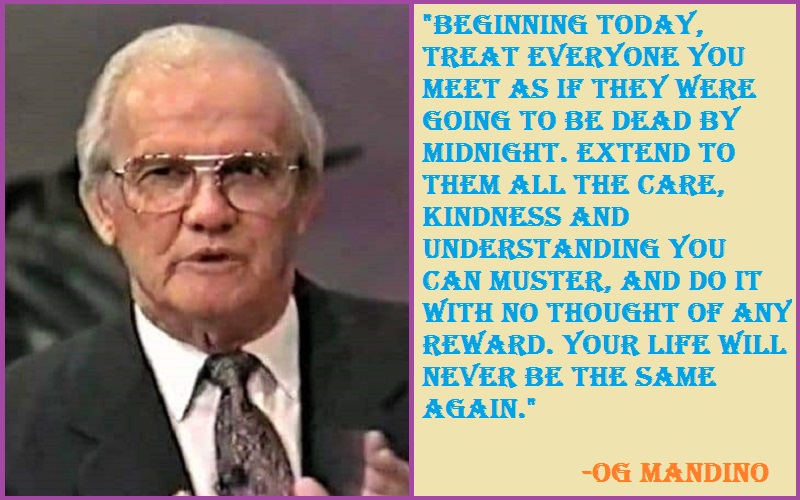 “Always do your best. What you plant now, you will harvest later.”-Og Mandino

“Always render more and better service than is expected of you, no matter what your task maybe.”-Og Mandino

“Always seek out the seed of triumph in every adversity.”-Og Mandino

“Do all things with love.”-Og Mandino

“Failure will never overtake me if my determination to succeed is strong enough.”-Og Mandino

“I am here for a purpose and that purpose is to grow into a mountain, not to shrink to a grain of sand. Henceforth will I apply ALL my efforts to become the highest mountain of all and I will strain my potential until it cries for mercy.”-Og Mandino 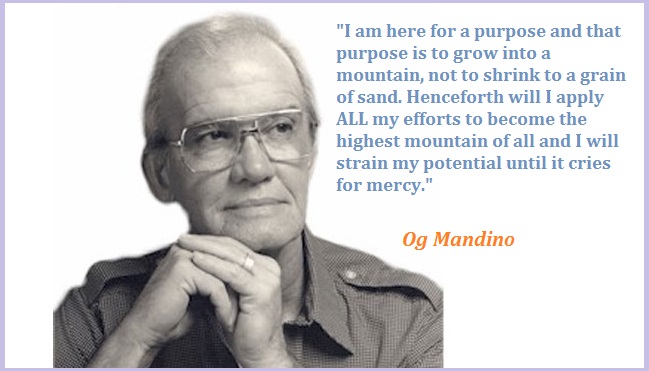 “I am rare, and there is value in all rarity; therefore, I am valuable.”-Og Mandino

“I have never heard anything about the resolutions of the apostles, but a good deal about their acts.”-Og Mandino

“I seek constantly to improve my manners and graces, for they are the sugar to which all are attracted.”-Og Mandino

“I will form good habits and become their slave. And how will I accomplish this difficult feat? Through these scrolls, it will be done, for each scroll contains a principle which will drive a bad habit from my life and replace it with one which will bring me closer to success.”-Og Mandino

“It is those who concentrate on but one thing at a time who advance in this world. The great man or woman is the one who never steps outside his or her specialty or foolishly dissipates his or her individuality.”-Og Mandino

“Obstacles are necessary for success because in selling, as in all careers of importance, victory comes only after many struggles and countless defeats.”-Og Mandino

“One of the things is we tend to give up too soon. We get knocked down a couple of times, and we stay down. It’s so important to get back up again.”-Og Mandino

“Sound character provides the power with which a person may ride the emergencies of life instead of being overwhelmed by them. Failure is… the highway to success.”-Og Mandino

“Take the attitude of a student, never be too big to ask questions, never know too much to learn something new.”-Og Mandino

“The height of my goals will not hold me in awe, though I may stumble often before they are reached.”-Og Mandino

“The person who knows one thing and does it better than anyone else, even if it only be the art of raising lentils, receives the crown he merits. If he raises all his energy to that end, he is a benefactor of mankind and its rewarded as such.”-Og Mandino

“There is an immeasurable distance between late and too late.”-Og Mandino

“To be always intending to make a new and better life but never to find time to set about it is as to put off eating and drinking and sleeping from one day to the next until you’re dead.”-Og Mandino

“To do anything truly worth doing, I must not stand back shivering and thinking of the cold and danger, but jump in with gusto and scramble through as well as I can.”-Og Mandino

“Tomorrow is only found in the calendar of fools.”-Og Mandino

“Treasure the love you receive above all. It will survive long after your good health has vanished.”-Og Mandino

“You never know what events are going to transpire to get you home.”-Og Mandino