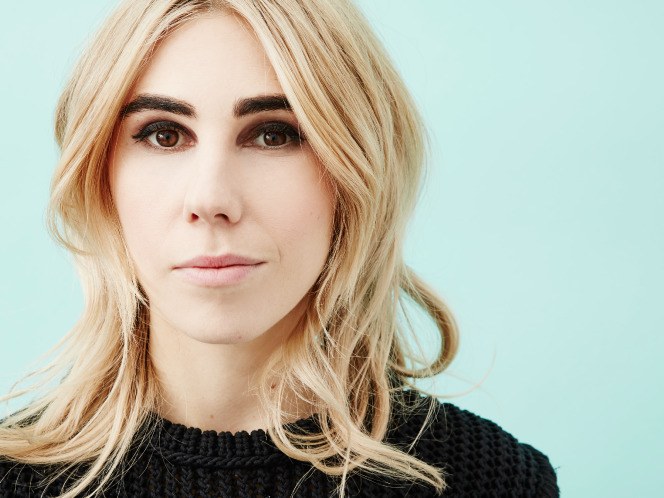 Zosia Mamet Quotes:- Zosia Mamet was born on February 2, 1988, in Randolph, Vermont, the USA as Zosia Russell Mamet. She is an actress and producer, known for The Kids Are All Right (2010), Girls (2012), and Cherry (2010). She has been married to Evan Jonigkeit on October 2, 2016. Zosia’s father is Ashkenazi Jewish (from a family from Russia and Poland). Zosia’s mother has English, Scots-Irish (Northern Irish), German, and Welsh ancestry.


She has a sister, Willa, who is a singer, and two half-siblings, Clara, who is also an actress and director, and Noah. She lived in New England until age five when her mother moved to Pacific Palisades, California with Willa and Zosia. After finishing high school, Mamet decided to pursue acting instead of going to college.

“My dad has always been really helpful. He taught me that talent is a bonus, but persistence is what wins out.” 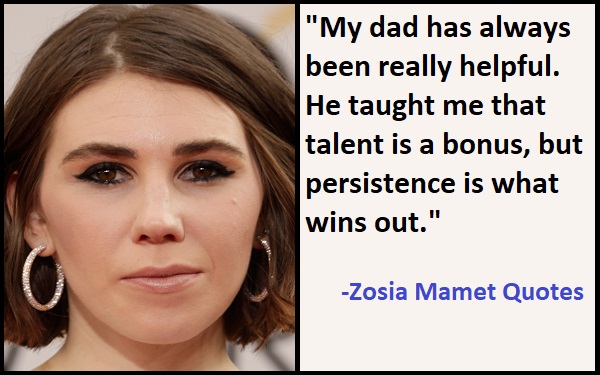 “I am an avid reader! As for writing, I might – someday. But we’ll have to wait and see.”

“A lot of people in line at the grocery store think that they know me, but they don’t.”

“Give me an 18-hour day on set or in the theater, and I will be the happiest person alive.”

“I haven’t found it to be particularly enjoyable… ninety percent of the time when I go on dates, I’m thinking, ‘I could be reading my book instead.”

“All the characters on ‘Girls’ are growing and changing, which is how real people behave, especially when we’re young, trying to figure out who we are, doing things that are the polar opposite of our characteristics.”

“I have quite a foul mouth.”


“I grew up backstage and on movie sets, and I thought they were the most magical places on Earth.”

“I don’t know if I would call myself a religious human.”

“My mom was onstage when she was pregnant with me.”

“I would have been miserable in college. I always hated school.”

“The comedy arises out of necessity because some things are so dark that you have to laugh about it.”

“I did ‘Mad Men’ and I still have people come up to me like, ‘Are you actually a lesbian?’ Really? Just because I play one on TV? People will think what they’re gonna think.”

“But my father was also the one who told me I needed to clean up my mouth or I’d never find a man. What’s very important to him is manners. Show up on time. Always send thank-you letters. He is one of the more thoughtful humans I’ve ever met. He’s a great man and a very good dad.”

“With ‘Girls,’ it doesn’t really feel like I’m doing TV specifically. It just feels like we’re making a really long film.
People idealize or reminisce about their 20s, but nobody tells you beforehand that it’s hard and unglamorous and often very unpleasant.”

“The lighthearted moments of ‘Girls’ are really not speckled throughout and that to me is just super exciting, to be able to delve into the darkness that you are greeted with in your early 20s and the fear and what that makes you do, the places that you can potentially go with that.”

“I went to a strict elementary school with nuns, and uniforms that I’m pretty sure were made out of sandpaper. It was an academic, sports-oriented place. I liked to read, and wanted to act, and didn’t try out for volleyball. I was weird.”

“The other girls would dip my hair in ink and stuff.”

“I think feminism’s a bit misinterpreted. It was about casting off all gender roles. There’s nothing wrong with a man holding a door open for a girl. But we sort of threw away all the rules, so everybody’s confused. And dating becomes a sloppy, uncomfortable, unpleasant thing.”

“I don’t watch much television. My old TV agent used to always get mad at me because he’d send me out on auditions and I’d be like, ‘What’s this show?’ and he’d be like, ‘It’s literally the top show on television.’ I wasn’t allowed to watch TV as a kid.”