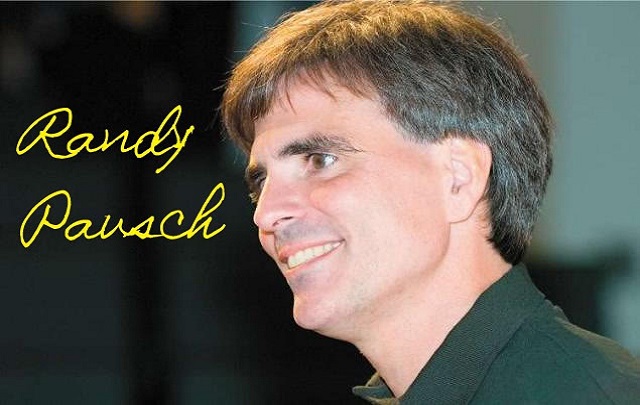 Randy Pausch Quotes:- Randy Pausch (October 23, 1960 – July 25, 2008) was an American professor of computer science, human-computer interaction, and design at Carnegie Mellon University (CMU) in Pittsburgh, Pennsylvania. Pausch learned that he had pancreatic cancer in September 2006, and in August 2007, he was given a terminal diagnosis: “3 to 6 months of good health left”.

He gave an upbeat lecture titled “The Last Lecture: Really Achieving Your Childhood Dreams” on September 18, 2007, at Carnegie Mellon, which became a popular YouTube video and led to other media appearances. He then co-authored a book called The Last Lecture on the same theme, which became a New York Times best-seller.

“Anyone who knows me well will tell you that arrogance is one of my flaws.”-Randy Pausch

“Are you a fun-loving Tigger or a sad-sack Eeyore? Pick a camp. I think it’s clear where I stand on the great Tigger/Eeyore debate!”-Randy Pausch 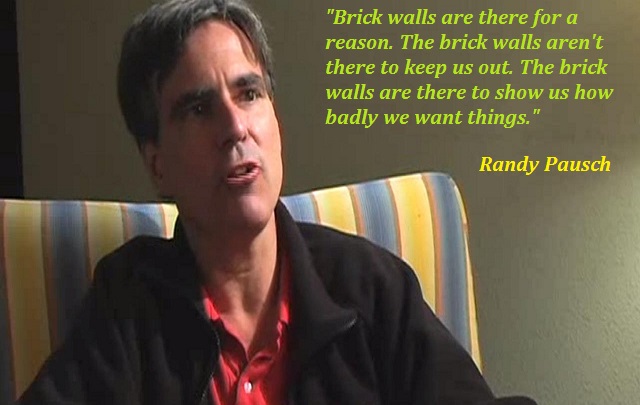 “Cancer didn’t change me at all. I know lots of people talk about life revelation. I didn’t have that.”-Randy Pausch

“Chemo days make me tired, though it’s hard to say that’s because of the chemo when you have kids who have inherited their dad’s usual energy level.”-Randy Pausch

“Educators shouldn’t be afraid of cliches. You know why? Because kids don’t know most of them! They’re a new audience. And they’re inspired by cliches.”-Randy Pausch

“Experience is what you get when you didn’t get what you wanted.”-Randy Pausch

“Fuel your kids’ dreams. Sometimes, that means letting them stay up past their bedtimes.”-Randy Pausch

“I always thought every day was a gift, but now I am looking for where to send the thank you note.”-Randy Pausch

“I am dying soon, and I am choosing to have fun today, tomorrow and every other day I have left.”-Randy Pausch

“I am going to keep having fun every day I have left” because there is no other way of life. You just have to decide whether you are a Tigger or an Eeyore.”-Randy Pausch

“I didn’t know there was a dying-professor section at the bookstore.”-Randy Pausch

“I don’t know how to not have fun. I’m dying and I’m having fun, and I’m going to keep having fun every day I’ve got left.”-Randy Pausch

“I played in football games where you walk off the field and the scoreboard didn’t end up the way you wanted. But you knew that you really did give it all. And the other team was too strong.”-Randy Pausch

“I think that we all stand on the dartboard of life. Roughly 30,000 people a year are going to catch a dart labeled pancreatic cancer, and that’s unfortunate. It’s not what I would have chosen. But I in no way feel like I deserved it.”-Randy Pausch

“I think the only advice I can give you on how to live your life well is, first off, remember… it’s not the things we do in life that we regret on our deathbed, it is the things we do not.”-Randy Pausch

“I will take an earnest person over a hip person every day” because hip is short-term, earnest is long-term.”-Randy Pausch

“If I could only give three words of advice, they would be, ‘Tell the truth.’ If I got three more words, I’d add, ‘All the time.”-Randy Pausch

“If I don’t seem as depressed or morose as I should be, sorry to disappoint you.”-Randy Pausch

“If your kids want to paint their bedrooms, as a favor to me, let ’em do it.”-Randy Pausch

“I’m a professor. I know that people in research labs can do miraculous things if they’re given the resources.”-Randy Pausch

“I’m attempting to put myself in a bottle that will one day wash up on the beach for my children.”-Randy Pausch

“I’ve decided to tell my kids things like: ‘I love the way each of you tilted back your heads when you laughed.’ I will give them specific stuff they can grasp.”-Randy Pausch

“I’ve never understood pity and self-pity as an emotion.”-Randy Pausch

“I’ve said my piece. My time now is entirely focused on family.”-Randy Pausch

“Make clear that people understand what your circumstances are. And looking for pity – that’s a mistake.”-Randy Pausch

“My mother took great relish in introducing me as ‘This is my son – he’s a doctor but not the kind that helps people.”-Randy Pausch

“Never, ever underestimate the importance of having fun.”-Randy Pausch

“Pretty much any time I got a chance to do something cool, I tried to grab for it, and that’s where my solace comes from.”-Randy Pausch

“Smelling a crayon takes you right back to childhood. When I need to go back in time, I put it under my nose and take another hit.”-Randy Pausch

“Success is measured in months for me. When my health fails, it will fail quickly. Tumors grow on an exponential curve.”-Randy Pausch

“There’s nothing about my life that I would have changed.”-Randy Pausch

“We cannot change the cards we are dealt, just how we play the game.”-Randy Pausch

“We have a finite amount of time. Whether short or long, it doesn’t matter. Life is to be lived.”-Randy Pausch

“When men are romantically interested in you, it’s really simple. Just ignore everything they say and only pay attention to what they do.”-Randy Pausch

“Work hard. I got tenure a year early. Junior faculty members used to say to me: ‘Wow, what’s your secret?’ I said: ‘It’s pretty simple. Call me any Friday night in my office at 10 o’clock, and I’ll tell you.”-Randy Pausch

“You can’t get there alone. People have to help you, and I do believe in karma. I believe in paybacks. You get people to help you by telling the truth, by being earnest.”-Randy Pausch