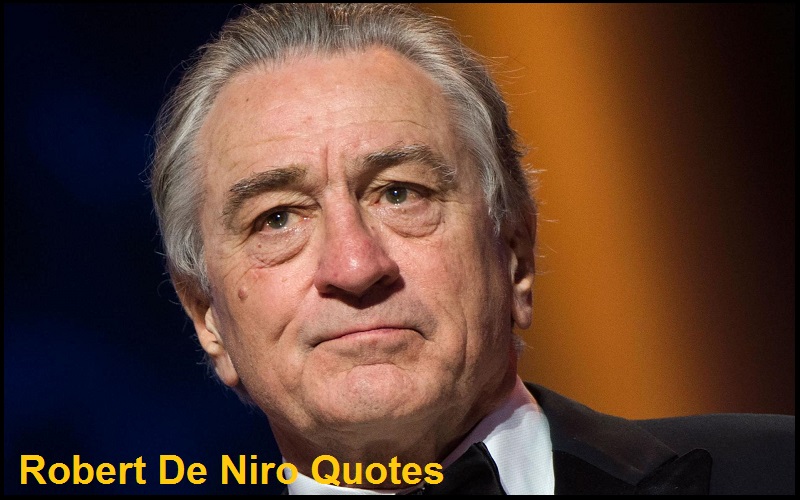 “I go to Paris, I go to London, I go to Rome, and I always say, ‘There’s no place like New York. It’s the most exciting city in the world now. That’s the way it is. That’s it.”-Robert De Niro 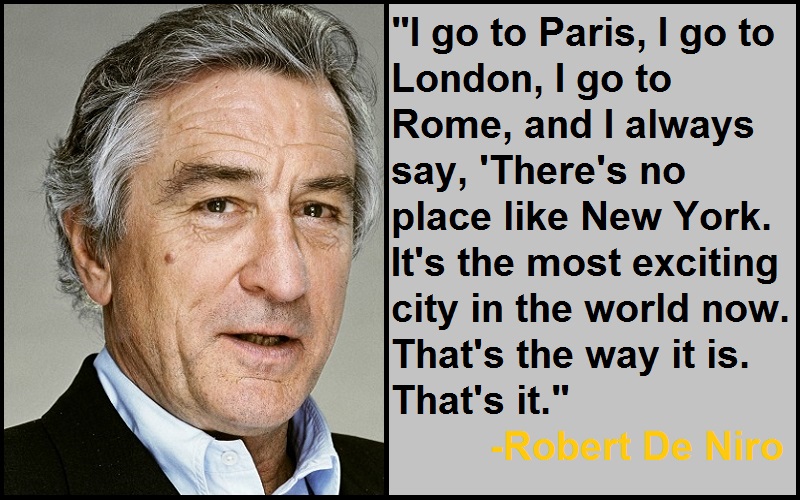 “One of the things about acting is it allows you to live other people’s lives without having to pay the price.”-Robert De Niro

“You learned the two greatest things in life, never rat on your friends, and always keep your mouth shut.”-Robert De Niro

“Italy has changed. But Rome is Rome.”-Robert De Niro

“My mother worked for a woman, Maria Ley-Piscator, who with her husband founded the Dramatic Workshop, which was connected to the New School. My mother did proofreading and typing and stuff or her, and as part of her payment, I was able to take acting classes there on Saturdays when I was 10.”-Robert De Niro

“I always go back to how people behave. If you watch how people actually behave in a situation, it’s very simple and honest and contained. You don’t need to use as much expression, as much feeling. Some characters will boil over, and that’s another thing, but a lot of times I think you can just do very, very little.”-Robert De Niro

“I spent lunchtime on a grave during the filming of ‘Bloody Mama.’ When you’re younger, you feel that’s what you need to do to help you stay in character. When you get older, you become more confident and less intense about it – and you can achieve the same effect.”-Robert De Niro

“Good directors can bring certain things out of you, with their intensity or gentleness or sensitivity or understanding. They can make an actor feel he can do no wrong.”-Robert De Niro

“I always tell actors when they go in for an audition: Don’t be afraid to do what your instincts tell you. You may not get the part, but people will take notice.”-Robert De Niro

“The hardest thing about being famous is that people are always nice to you.”-Robert De Niro

“I didn’t have a problem with rejection, because when you go into an audition, you’re rejected already. There are hundreds of other actors. You’re behind the eight balls when you go in there.”-Robert De Niro

“When you make a drama, you spend all day beating a guy to death with a hammer, or what have you. Or, you have to take a bite out of somebody’s face. On the other hand, with a comedy, you yell at Billy Crystal for an hour, and you go home.”-Robert De Niro

“I think Hollywood has a class system. The actors are like the inmates, but the truth is they’re running the asylum.”-Robert De Niro

“I mean, the actors that I admired were Marlon Brando, Montgomery Clift, an actress named Barbara Harris. And Greta Garbo. They were great actors.”-Robert De Niro

“You draw on whatever’s relevant to the part you’re playing; it makes it more personal.”-Robert De Niro

“If it’s a very emotional scene, you’re kind of relieved when you’ve done it, kind of spent. And there are times when you can be rattled, certain characters if they’re hyper, that can carry over, the residue of that. But I try to leave it on the set.”-Robert De Niro

“The director respects what they’ve hired you for and chosen you for: to do the part and respect what you’re doing.”-Robert De Niro

“I like to visit L.A., but I wouldn’t want to live there.”-Robert De Niro

“You never know what you do that could be totally out of the left-field, which actually might work and give something fresh to the whole scene, to the character, whatever. If you have that with a director who then knows how to shape it, either in the direction, in the moment, or in the editing, then that’s good.”-Robert De Niro

“I don’t get into these long-winded heavy discussions about character – do we do this or that or what. At the end of the day, what you gotta do is just go out there and do it.”-Robert De Niro

“I’m lucky that I have whatever I had that makes me have a successful career if you will.”-Robert De Niro