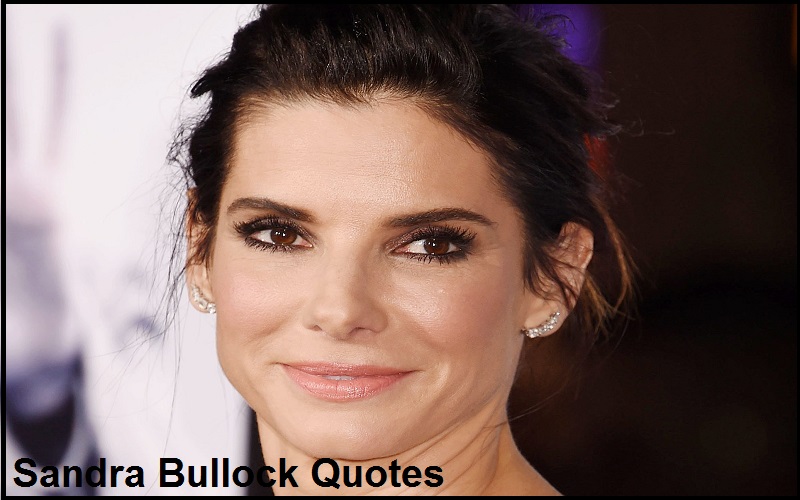 Sandra Bullock Quotes:- Sandra Bullock (born July 26, 1964) is an American actress, producer, and philanthropist. She was the highest-paid actress in the world in 2010 and 2014.

In 2015, Bullock was chosen as People’s Most Beautiful Woman and was included in Time’s 100 most influential people in the world in 2010. Bullock is the recipient of several accolades, including an Academy Award and a Golden Globe Award.

“Human beings exist that have integrity, that knows how to keep their mouth shut, that know the bigger picture, that doesn’t sell out their friends.”-Sandra Bullock 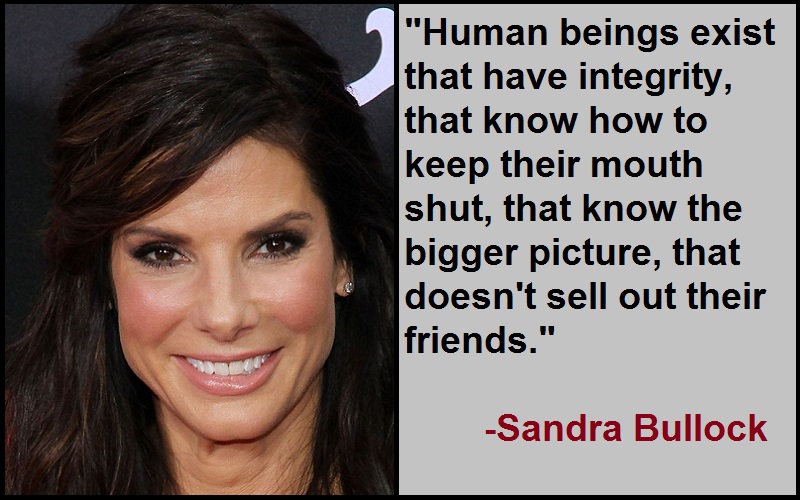 “I have no desire to maintain a lifestyle. I am a horrible celebrity. If I am out in public I dress like a pig.”-Sandra Bullock

“The only man who has stolen my heart is my son.”-Sandra Bullock

“I think most of us are raised with preconceived notions of the choices we’re supposed to make. We waste so much time making decisions based on someone else’s idea of our happiness – what will make you a good citizen or a good wife or daughter or actress. Nobody says, ‘Just be happy – to be a cobbler or go live with goats.”-Sandra Bullock

“I’m not a fan of reality shows, but I am a fan of people who use their brains and skills and hard work to outsmart people, not to steal someone’s man or get drunk on TV.”-Sandra Bullock

“Falling in love-you should go with it, regardless of whether or not your heart gets smashed. You’ll be a better person.”-Sandra Bullock

“If you can’t pronounce it, you probably shouldn’t be putting it in your body or in your environment.”-Sandra Bullock

Fame means when your computer modem is broken, the repair guy comes out to your house a little faster.”-Sandra Bullock

“I feel like when you have an unauthorized police badge and something that looks like it could be a concealed weapon in the small of your back that when you, someone crosses you, pisses you off, road rage, I think just the slight badge and the little moving away of the jacket and not losing eye contact does amazing things.”-Sandra Bullock

“I haven’t always acted or reacted in a way that made me proud, but I didn’t make that same mistake twice, and I think that’s what I love about adversity is that it always reminds me of what’s really valuable in life.”-Sandra Bullock

“I was afraid of being a failure, of not having the best time or of being chicken. But every year I get older I think, What was I fearing last year?’ You forget. And then you move on.”-Sandra Bullock

“I gave up coffee. It’s almost worse than giving up a lover.”-Sandra Bullock

“Everyone told me to pass on ‘Speed’ because it was a ‘bus movie.'”-Sandra Bullock

“I think Benjamin Bratt is the most dreamy… he’s dreamy! And I love the fact that he’s got this Peruvian heritage; he’s absolutely striking.”-Sandra Bullock

“I basically became a cheerleader because I had a very strict mom. That was my way of being a bad girl.”-Sandra Bullock

“Being in front of a camera, in a nice dress, getting all dressed up, is extreme. There’s a lot of other extreme situations, you know, just getting out of bed sometimes is extreme – but I do it. Just got to do it, just got to get up. Put your sweatpants on, brush off the dog hair and just get out of the house!”-Sandra Bullock

“I love fashion. I love couture. I’m going to erect a shelf in my bedroom with an art light to be the spot for the shoes of the month.”-Sandra Bullock

“Forensics I’ve always found absolutely fascinating. Anything to do with clues. And checking things out and solving.”-Sandra Bullock

“My mother always told me, ‘Don’t get married. Make your own life. You don’t need a man.”-Sandra Bullock