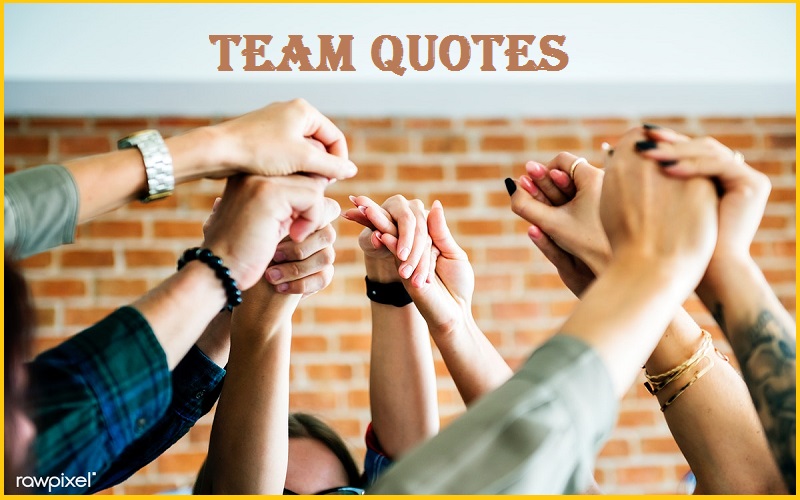 Team Quotes:- A team is a group of individuals working together to achieve their goal. As defined by Professor Leigh Thompson of the Kellogg School of Management, a ” team is a group of people who are interdependent with respect to information, resources, and skills and who seek to combine their efforts to achieve a common goal”.

Below you will find our collection of inspirational, wise, and humorous old team quotes, team sayings, and team proverbs, collected over the years from a variety of sources.

“Teams are successful when they are focused, have a short cycle time, and are supported by the executives.”-Tom Bouchard

“Teams are not ends in themselves; they are a means by which to achieve other organizational goals.”-Richard Wellins, William Byham, Jeanne Wilson

“There is no such thing as a self-made man. You will reach your goals only with the help of others.”-George Shinn

“All are one unless and until they are asked to work together to achieve a noble goal one.”-Anuj Somany

“On our own, we are marshmallows and dried spaghetti, but together we can become something bigger.”-C.B. Cook

“A group becomes a team when each member is sure enough of himself and his contribution to praise the skills of others.”-Norman Shidle

“Great things in business are never done by one person. They’re done by a team of people.”-Steve Jobs

“Sometimes being on a team means being humble and putting others first. It has to be about the team and not the individual”-Maggie White

“Teams, not individuals, are the fundamental learning unit in modern organizations. This is where the “rubber stamp meets the road”; unless teams can learn, the organization cannot learn.”-Peter M. Senge

20 Best Inspirational Quotes About Working Together

“One man can be a crucial ingredient on a team, but one man cannot make a team.”-Kareem Abdul-Jabbar

“Great teams do not hold back with one another. They are unafraid to air their dirty laundry. They admit their mistakes, weaknesses, and concerns without fear of reprisal.”-Patrick Lencioni

“There is no ‘I’ in the team but there is in the win.”-Michael Jordan

“A successful team is a group of many hands and one mind.”-Bill Bethel

“When a gifted team dedicates itself to unselfish trust and combines instinct with boldness and effort, it is ready to climb.”-Patanjali

“None of us is as smart as all of us.”-Ken Blanchard

“A group becomes a team when each member is sure enough of himself and his contribution to praise the skills of the others.”-Norman Shidle

“It is a fact that in the right formation, the lifting power of many wings can achieve twice the distance of any bird flying alone.”-Anonymous

“If a team is to reach its potential, each player must be willing to subordinate his personal goals to the good of the team.”-Bud Wilkinson

“What sets apart high-performance teams, however, is the degree of commitment, particularly how deeply committed the members are to one another.”-Jon R. Katzenbach & Douglas K. Smith

“Individual commitment to a group effort – that’s what makes a team work, a company work, a society work, a civilization work.”-Vince Lombardi

“Finding good players is easy. Getting them to play as a team is another story.”-Casey Stengel

“Individual commitment to a group effort – that is what makes a teamwork, a company work, a society work, a civilization work.”-Vince Lombardi

“The temptation to take the easy road is always there. It is as easy as staying in bed in the morning and sleeping in. But discipline is paramount to ultimate success and victory for any leader and any team.”-Jocko Willink

“The way a team plays as a whole determines its success. You may have the greatest bunch of individual stars in the world, but if they don’t play together, the club won’t be worth a dime.”-Babe Ruth