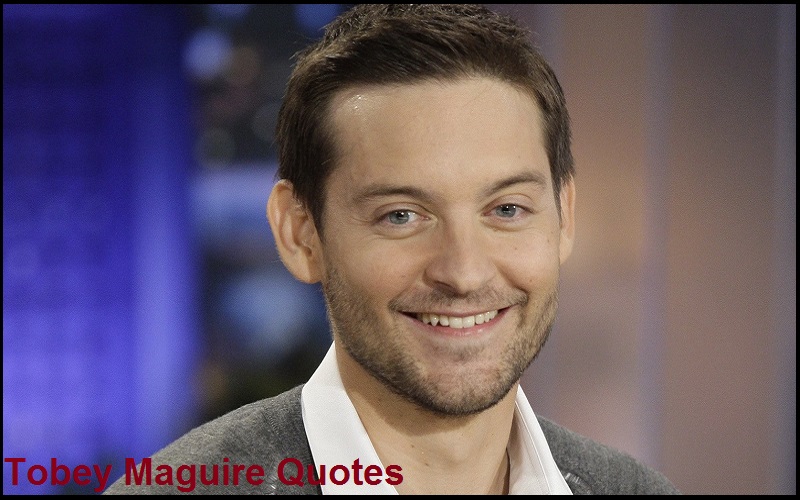 Tobey Maguire Quotes:- Tobias Maguire (born June 27, 1975) is an American actor and film producer. He is best known for his role as Peter Parker / Spider-Man in Sam Raimi’s Spider-Man trilogy.

His other major films include Pleasantville, The Cider House Rules, Wonder Boys, Seabiscuit, The Good German, Brothers, and The Great Gatsby.

“You live for those really great scenes where you almost feel that the film has gone beyond what was printed on the script pages and been raised to another level.”-Tobey Maguire 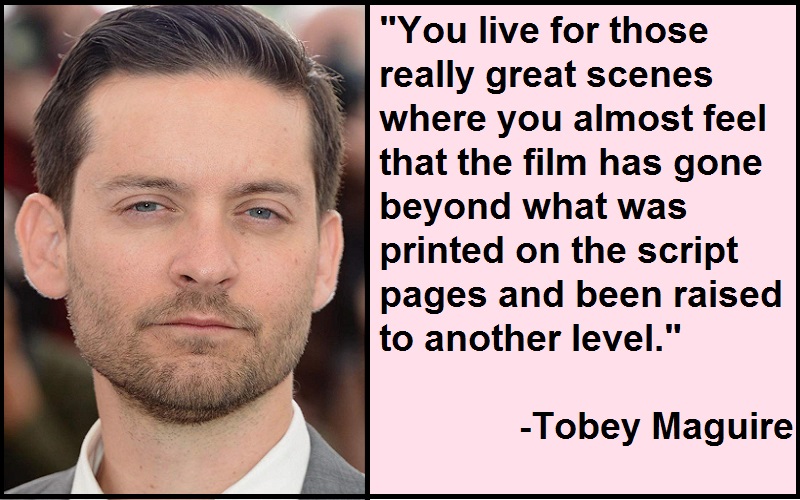 “To me, the whole idea of fame and I think it can be a real test of somebody, of who they are. You know, ’cause some strange things happen. I’ve seen some peculiar things as far as a person just living their life.”-Tobey Maguire

“I might have some character traits that some might see as innocence or naive. That’s because I discovered peace and happiness in my soul. And with this knowledge, I also see the beauty of human life.”-Tobey Maguire

“I just try to try to keep an attitude that I don’t know what I’m doing. Not to the point where I’m beating myself up, but I just go in thinking that I have a lot to learn. And I hope I still have that attitude 30 years from now.”-Tobey Maguire

“I think the greatest way to learn is to learn by someone’s example.”-Tobey Maguire

“I started working around eight grades. I remember doing a Doritos commercial where there were four days in a row of eating them, and I will tell you, I have not eaten many Doritos since.”-Tobey Maguire

“If I’m in a social situation sometimes I’ll hang back and observe people but I feel very much a part of things most of the time and feel very comfortable socializing and have for most of my life.”-Tobey Maguire

“If I wanted to go be social I would. I don’t have any fear of that. I don’t feel like I’m a shy person at all.”-Tobey Maguire

“I believe in a higher force that is within me.”-Tobey Maguire

“I have no illusions at all about being a sex symbol. None of my former girlfriends ever thought of me that way, and I don’t have any packs of women chasing me down the street like a Brad Pitt or someone like that.”-Tobey Maguire

“I’ll go do films for three or four months and then I can’t wait to go home to LA. And I complain about LA left and right, but then I always end up wanting to go home, you know?”-Tobey Maguire

“I’m so critical of my own work that it’s difficult for me to disassociate myself and watch it as an audience.”-Tobey Maguire

“I’ve been curious about certain things but didn’t let them get in the way of my life. I don’t know how people become successful with some kind of habit.”-Tobey Maguire

“I am a blank slate – therefore I can create anything I want.”-Tobey Maguire

“The most attention I get is in a book store or video shop when I go to the foreign film section. Sometimes that can be fun, but usually, those women want to talk about philosophy or something very dense. It’s not like they’re tearing off my shirt, you know.”-Tobey Maguire

“If you’re sitting in the audience, you probably can’t see the preparation and work that goes into creating a great scene or a great part, but I can assure you that a good film depends on a lot of different things falling perfectly into place.”-Tobey Maguire

“People, photographers, people in the press can sometimes be inappropriate.”-Tobey Maguire

“There are so many things I want to do. I want to work with great filmmakers, great actors, great scripts. And there’s no reason for me to do anything short of that because I’m 24, I don’t have a family, I don’t need to make tons of money, and I’m not dying to get famous.”-Tobey Maguire