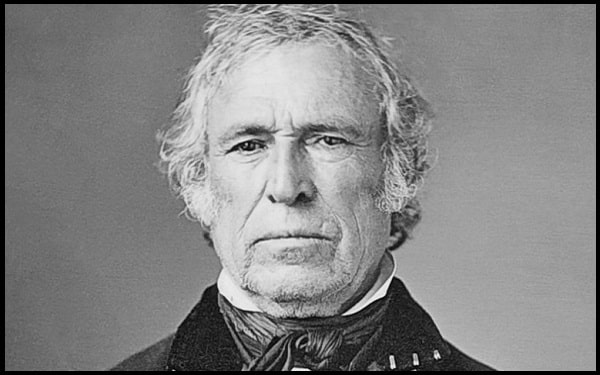 Zachary Taylor Quotes:- Zachary Taylor (November 24, 1784 – July 9, 1850) was the 12th president of the United States, serving from March 1849 until his death in July 1850. Taylor previously was a career officer in the United States Army, rose to the rank of major general, and became a national hero as a result of his victories in the Mexican–American War.

As a result, he won election to the White House despite his vague political beliefs. His top priority as president was preserving the Union, but he died sixteen months into his term.

“Economy I consider a virtue & should be practiced by all; there is certainly no way in which money can be laid out than in the education of children.”-Zachary Taylor

“As to the Constitution and the Union, I have taken an oath to support the one, and I cannot do so without preserving the other unless I commit perjury, which I certainly don’t intend to do. We must cherish the Constitution to the last.”-Zachary Taylor

“For more than a quarter of a century on active duty, my house has been my tent, and my home the battlefield.”-Zachary Taylor

“I congratulate you, my fellow-citizens, upon the high state of prosperity to which the goodness of Divine Providence has conducted our common country.”-Zachary Taylor

“I have always done my duty. I am ready to die. My only regret is for the friends I leave behind me.”-Zachary Taylor

“I hope some compromise will be entered into between the two parties, slavery & antislavery, which will have the effect of allaying violent passions on both sides.”-Zachary Taylor

“I know enough about the family life of the officers. I scarcely know my own children or they me.”-Zachary Taylor

“I did not expect to encounter what has beset me since my elevation to the presidency. God knows I have endeavored to fulfill what I considered to be an honest duty, but I have been mistaken; my motives have been misconstrued and my feelings grossly betrayed.”-Zachary Taylor

“I will not say I would not serve if the good people were imprudent enough to elect me.”-Zachary Taylor

“If elected, I would not be the mere president of a party – I would endeavor to act independent of party domination and should feel bound to administer the government untrammeled by party schemes.”-Zachary Taylor

“In all disputes between conflicting governments, it is our interest not less than our duty to remain strictly neutral.”-Zachary Taylor

“In no case can I permit me to be a candidate of any party or yield me to any party schemes.”-Zachary Taylor

“In reference to the Army and Navy, lately employed with so much distinction on active service, care shall be taken to ensure the highest condition of efficiency; and in furtherance of that object, the Military and Naval Schools, sustained by the liberality of Congress, shall receive the special attention of the Executive.”-Zachary Taylor

“It would be judicious to act with magnanimity towards a prostrate foe.”-Zachary Taylor

“My duty to the army and to the republic whose battles we were waging forbade me assuming a position of seeming hostility to any portion of the brave men under my command.”-Zachary Taylor

“My wife was as much of a soldier as I was.”-Zachary Taylor

“Never judge a stranger with his clothes.”-Zachary Taylor

“The confidence and respect shown by my countrymen in calling me to be the Chief Magistrate of a Republic holding a high rank among the nations of the earth have inspired me with feelings of the most profound gratitude.”-Zachary Taylor

“The idea that I should become President seems to me too visionary to require a serious answer. It has never entered my head, nor is it likely to enter the head of any other person.”-Zachary Taylor