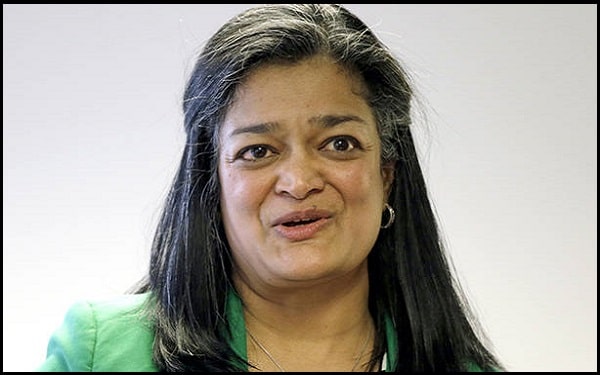 Pramila Jayapal Quotes:- Pramila Jayapal (born September 21, 1965) is an American politician and activist who currently serves as the U.S. Representative from Washington’s 7th congressional district, which includes most of Seattle as well as suburban areas of King County. 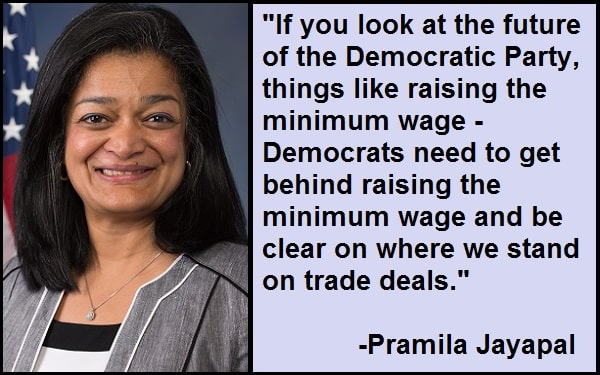 “We on the Left are very good at criticizing people, but we need to build the base to pull people to the Left.”-Pramila Jayapal

“Can you be a progressive if you’re anti-immigrant but pro-choice? No!”-Pramila Jayapal

“My big idea is that democracy can only work properly if you have truly representative people at the table.”-Pramila Jayapal

“If someone tells me that something can’t be done, that makes me more determined to do it.”-Pramila Jayapal

“There isn’t really precedent for asylum seekers’ being criminally prosecuted at the border before they’ve had a ‘credible fear’ hearing. You come seeking asylum. Seeking asylum is not illegal.”-Pramila Jayapal

“Ripping children away from their parents has a particularly shameful history, both in this country and around the world.”-Pramila Jayapal

“We must be clear: Donald Trump is lying when he conflates immigrants coming across the border with MS-13 gangs.”-Pramila Jayapal

“We are a country that has always been known for providing opportunities to people. We have lost a lot of that opportunity.”-Pramila Jayapal

“I was on the committee that helped raise the minimum wage here in Seattle. I introduced a statewide bill to raise the minimum wage in Washington state my first year in the state senate, and I really believe that raising the federal minimum wage, while not the answer to everything, addresses a lot of the issues at the very bottom.”-Pramila Jayapal

“We have to have a planet to pass on to the next generation, and these issues of climate change and climate justice and the disproportionate burdens that communities of color actually bear from our damaging climate is a huge issue.”-Pramila Jayapal

“I came to the United States by myself when I was 16 years old. My parents had about $5,000 in their bank account, and they used it all to send me here because they truly believed that this country was where I was going to get the best education and have the best opportunities.”-Pramila Jayapal

“What Republicans so cynically refer to as ‘chain migration’ is actually family-based immigration – a humane and compassionate policy of reunifying families. It allows spouses to be together, siblings to support each other, and children to be with their parents. It allows immigrants who are already here to be successful.”-Pramila Jayapal

“The vast majority of immigrants – regardless of the conditions of war and poverty that may wrack their home countries – come and contribute to their new home country: building our roads, caring for our homes, children, and elders, and serving as doctors, lawyers, employers, and innovators.”-Pramila Jayapal

“For immigrant women, the very act of immigration is about opportunity, equality, and freedom. Women immigrants come to America to care for their families, escape gender-based violence, or express their sexual identity.”-Pramila Jayapal

“For immigrant women, fighting for some of the standard platforms of the women’s movement may feel unthinkable when deportation is staring you in the face every day.”-Pramila Jayapal

“We need to expand the idea of choosing to be about all the choices we make in our lives: including which country we choose to live in so we can be whole and full women.”-Pramila Jayapal

“Before running for the Washington State Senate in 2014, I had spent 20 years as an activist. I had always believed that we needed to push for change on the outside, through community organizing and advocacy.”-Pramila Jayapal

“We don’t get a more responsive government unless we start to systematically run organizing campaigns to change the way government works.”-Pramila Jayapal

“I love my district, the 37th Legislative District in Washington State, where I have lived for more than 20 years.”-Pramila Jayapal

“I’m conscious of my race and ethnicity in the legislature – it’s hard not to be.”-Pramila Jayapal

“OneAmerica worked over the course of a decade to bring the movement of immigrants and communities of color together with the movement for marriage equality in Washington.”-Pramila Jayapal

“Gays and lesbians gained rights in this country through activism and organizing, creating political space and demanding change so that lawmakers and justices could do what they knew was right. That organizing allowed Americans to get to know gays and lesbians as our daughters and sons, our neighbors, and our friends.”-Pramila Jayapal

“I’m not a complainer. I’m a doer. So if I see something is wrong, then I feel like I have to get in there and try to fix it.”-Pramila Jayapal

“I have a little yoga ritual that I do just to move my body around. Whatever I do, it’s usually very fast because often I don’t have the kind of time that I would like to.”-Pramila Jayapal

“I’ve always thought of the United States as a place where so much was possible and so many opportunities were out there.”-Pramila Jayapal

“If you’re an opposition party, you are actively using the power you have to oppose the ideas of the other party.”-Pramila Jayapal

“There were not that many people who were willing to come out and stand up for Muslims or stand up against the abuses of the Bush administration. That was post-9/11, so I think there was a lot of fear at the time about exactly what that meant – were they unpatriotic if they stood up?”-Pramila Jayapal

“People who think that the immigration system is easy and people should just apply legally – it just isn’t that easy.”-Pramila Jayapal

“Racism, sexism, and ageism are all alive and well in the U.S. House.”-Pramila Jayapal

“I have an incredibly supportive family.”-Pramila Jayapal

“I’m an organizer at heart. Organizers know that giving information, being in front of people, talking to people, to build our movement for the kind of country that we see is the most important thing.”-Pramila Jayapal

“President Trump has harnessed the fear and prejudice that have accompanied every wave of immigrants in United States history and stoked those fears to further his own agenda.”-Pramila Jayapal

“What makes America great is our commitment to our values of inclusivity and opportunity for all.”-Pramila Jayapal

“Immigration is about more than just who comes here and who is allowed to stay. It is about who we are as a country and what we are willing to stand up for.”-Pramila Jayapal

“The American people expect their leaders to condemn white supremacy in unambiguous terms. President Trump not only failed at condemning white supremacists and neo-Nazis, but he also stood up for them – for that, he must be censured.”-Pramila Jayapal

“I am grateful for my family, friends, and all those who send constant love and support – you are my energy and my hope. You teach me, love me even when I’m wrong, and let me ride the challenges and come out whole.”-Pramila Jayapal

“We can never be afraid to stand up for what is right, no matter what others may say. And sometimes, if that means taking a lonely road, if what we are standing for is true, then perhaps moonlight or sunshine will light our way and make it less lonely.”-Pramila Jayapal

“Those who have the most power – whether famous TV anchors, rich Hollywood moguls, judges, Members of Congress, or the president of the United States – must decide how to exert that power: for corruption or for good.”-Pramila Jayapal

“When women are told that sexual harassment is ‘part of the job’ or when assistants of both sexes enable harassing behavior, they have bought into the culture that says such behavior is not just permissible, it is a desirable expression of power.”-Pramila Jayapal

“Civil rights icons, famous journalists, big-time movie producers may all have credits to their name that we can recognize and be grateful for, but their record of good works cannot excuse their harassment of women.”-Pramila Jayapal

“When bosses, leaders, and powerful men and women ignore or deny the accounts of harassment victims, they reinforce the idea that harassers are playing the game as they should and that the rest of us should fall in line.”-Pramila Jayapal

“Rather than name-calling and arguing about whether it is appropriate or not to employ radical tactics, we progressives need to start listening to each other.”-Pramila Jayapal

“Regardless of who is elected president in 2016, we all still live together. Each of us has a different role to play, but we all have to hold the collective space for movement-building together. It’s the only way we move forward.”-Pramila Jayapal